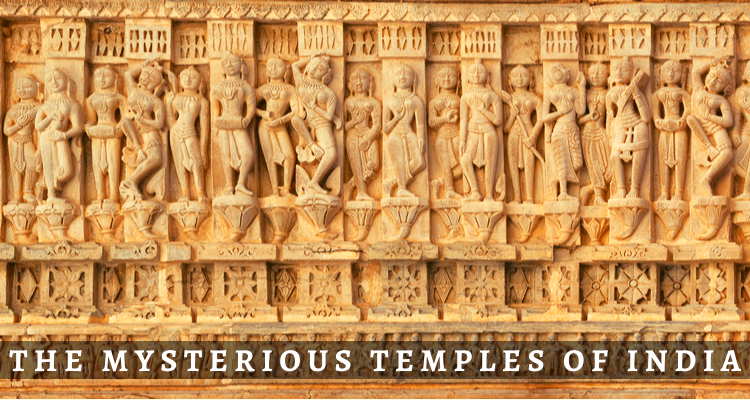 There is always something that sets a traveller’s soul on fire. Starting from participation in India’s cultural festivals, attending grand feasts, staying in a good-hearted stranger’s home, to visiting incredible temples, a tourist will always want to be a traveller in a safe environment. And these temples are secure dens with different stories, customs, and unknown secrets. Tap open the doors of these unique shrines to know what your soul desires.

How will holiday 2021 bring back the sunshine in family time? | Family Travel India 2021

A temple in India celebrates womanhood and menstruation as its presiding deity is menstruating Goddess Sakthi. The shrine of this bleeding Goddess temple is situated in the capital city, Guwahati of Assam. Astonishingly during June, the colour of Brahmaputra turns red which is associated with a mythological tale. To pacify the anger of Lord Shiva, it is said that Lord Vishnu sent his chakra to cut the corpse of Sakthi into 108 pieces which fell on 108 places. They are known as Sakthi Peeths in India and the place where the womb and vagina landed is Kamakhya according to the tale.

Jagannath Temple: The Temple of Opposites

This is the “Temple of Opposites” where the flag mounted on the top of the temple flies in the opposite direction to the wind, no eagle or vulture fly above this holy temple, the prasad in most holy temples of India go wasted or won’t be enough for everyone but in Puri Jagannath, everything gets into someone’s abdomen instead of the bin. Likewise, when you enter the temple from Singh Dwaraha during the evening time, the sound of waves gets completely muted. Another opposite phenomenon – The direction of the wind. Usually, the morning breeze comes from the sea and evening breeze comes from the land but Puri Jagannath perfectly does the opposite.

Indian Panorama Welcomes the Rebirth of Tourism | 9 Things to Expect from Tourism 2.0

Padmanabhaswamy Temple: The Chambers of Secrets

Believed to be the richest temple in the world, Padmanabhaswamy Temple in Thiruvananthapuram of God’s Own Country, Kerala is the summit of all mythological tales and magical novels. The vaults here hold more secrets than the Chamber of Secrets. As tonnes of gold ornaments, treasures, unimaginable piles of gold bars, and countless cobras are said to exist. Specifically, the secret chamber beneath Vault B is where the most breathtaking secret exists and it is believed the entire chamber is made of gold and other treasures.

Being one of the 108 Divya Desams, this temple honours the woman deity Nachiyar first and then Srinivasa, the male deity joins the procession. The mystery unfolds only when the Kal Garuda (The Stone Eagle Structure) is taken out during the procession. Initially, only four people are required to carry the stone Garuda out of the sanctum sanctorum and the number multiplies to 8, 16, and 32 men. The weight of the stone Garuda keeps increasing from the moment it is taken out of its holy shrine. Check out the list of must-visit temples in Tamil Nadu.

There lies a small temple at the top the Pandava Gudda Hills in Sakleshpur of Karnataka. The picturesque views keep the charm of this old shrine intact. No one knows who built this temple but Indian Epic Mahabaratha has a great connection with this temple. There is a staunch belief that Pandavas stayed near this temple for a while during their exile. Dedicated to Lord Shiva, Betta Bhairaveshwara Temple celebrates an Annual Abhisheka during the January month where devotees throng in huge number.

Hasanamba Temple: Rarity at its Peak

This temple is opened only once in a year, exactly in the first Thursday after the full moon in the Ashwayuja month (according to Hindu Calendar). The temple remains open just for a week or 10 days during the festival of lights, Diwali. The lamp, flowers, and prasad remain unspoilt when the temple doors are opened after a year. It is also observed that a mystical stone here inches closer every year toward Goddess Sakthi. It is believed Kali Yuga (The Last Cycle of the World according to Hindu beliefs) will come to an end once the stone reaches the feat of the Goddess. The temple doors will be open from October 28 to November 5, 2021.

There is a temple in Kanpur, India that predicts the intensity of a monsoon. The water accumulated in the roof of Lord Jagannath temple at Bhitargaon Behta is directly proportional to the richness of the monsoon. According to the head priest, this temple is like a stupa constructed in the era of Ashoka Empire. Scientists couldn’t fathom the phenomenon of this temple. If the water droplets are big, then monsoon rains will be big and if the droplets are small, drought will occur.

The 16th cave of Ellora caves is where Kailasa Temple exists today. This temple is the largest temple monolith in the whole world. This holy complex was carved out of a single mountain from the top to bottom. An impossible feat! Beautiful Ramayana Scenes, Pushpak Vimanam (Jet Pack), Lord Shiva performing Ananda Thandavam (Dance of Joy), lively elephant structures, and other mythical creatures are sculpted in the humungous rocky walls of this temple. All from one big boulder. There have been incidents people experienced a divine vibe after visiting this holy temple complex.

Visualize yourself travelling to the most mysterious portions of India accompanied by a holy aura, your life will make a positive turn. Discovering the secrets of Indian temples from its statues to wall paintings is a beautiful feeling to the entire mankind. Let humanity flourish like the age-old Indian temples. Taste the mystery of these temples in India with your family and curious friends. Which one of these temples excited your soul?