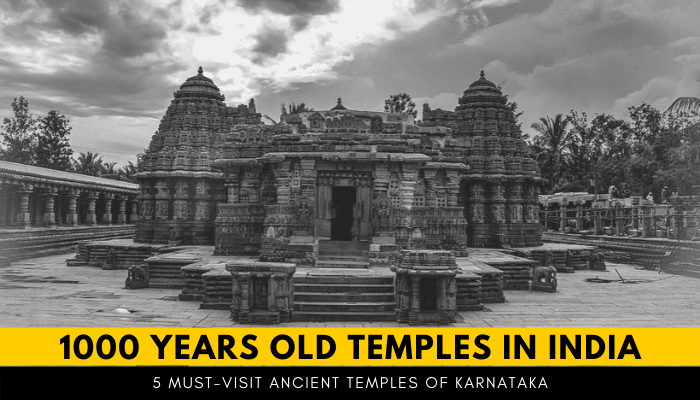 From laser-cut pillars of Hoysaleshwara in Halebidu, pillars producing Carnatic music in Hampi to 12th-century statues representing telescopes, Karnataka is a countless confluence of mysterious temples. The powerhouse of ancient temple structures, next only to the temples of Tamil Nadu. Here is a list of 5 temples in Karnataka close to 1000 years old. Know about the history of this temple quickly before visiting these temples. Get started with the ancient temple series of India. Know India better!

Located close to one of the greatest warriors of all time, Tipu Sultan’s Fort, Bhoga Nandeeshwara Temple is a complex of three temples near the foothill of Nandi Hills. The Bull Statue is famous for its legend of creating the Shringi Theertha, also believed to be the source of the Pennar River. Originally, Bana Queen Ratnavati had built this temple in the 9th century. While roofs were built by Chola, Marriage Halls by Hoysalas, and outer walls by Vijayanagara Empires. Five rivers flow from this hill region, namely – Palar, Akravathy, Pinakini, Swarnamukhi, and Papagni. After Tipu’s defeat in October 1791, Britishers seized this place.  Arunchaleshwara is one temple which represents the childhood of Lord Shiva, Uma Maheshwara represents the marriage phase of Lord Shiva and Parvati while the renunciation of Lord Shiva is depicted in Bhoga Nandeeshwara Temple. The presiding deity, Bhoga Nandheeshwara’s temple is believed to be built by Cholas. Rajendra Chola’s statue stands as an eternal testimony in this beautiful ancient temple of Karnataka.

Chamundeshwari Temple: The Treasure of Mysore

Close to 1000 years, Chamundeshwari Temple is a famous hill temple in Mysore. The original temple was built during the Hoysalas period while the temple towers were built during the reign of the Vijayanagara Empire in the 17th century. This temple has a 15 feet bull statue around the 800th of the 1000 steps of the temple. From the 18th century, animal sacrifices have been stopped and are one of the 18 Maha Sakthi Peethas in the country. This Dravidian temple also hosts the deities of Lord Hanuman and Lord Ganesha. The popular Mahishasura Mardini statue is present in this beautiful temple and the best time to visit this temple is from October to December. People climb to the top of this temple using the 1000 steps the Woodeyar dynasty had constructed, to end all their sins and bad karma.

Located in the Kolar district of Karnataka, Someshwara Temple is believed to be established by the Chola Empire. Later, the Vijayanagara Empire had laid the extensive foundation for the development of this Dravidian Temple. What is astonishing is the inner pillars of the temple which speak volumes about the international trade connection. The Mahadwara or main entrance succeeded by the imposing structure Gopura or Temple Tower is a noteworthy attraction. Adorned outer wall moldings, Vijayanagara carvings on doors, elephant’s frieze, and bespangled lion carvings make Someshwara Temple a must-visit even for the atheists. The architecture of the Kalyana Mandapa in Someshwara is popular due to the confluence of the European, Thai, and Chinese style constructions. The stucco figures and mythological tales surrounding the pillars and ceilings are examples of impressive Dravidian architecture.

Being a proud possessor of more than 125 temples, Aihole is one of the nominees of the UNESCO World Heritage Site list. Out of all those stone and rock-cut temples, Lad Khan Temple is a novelty. What was once a Vaishnava temple is now a prominent Shavaite Temple, the presiding deity is Lord Shiva. There is an interesting story of prince Lad Khan making this temple as his residence during his reign. Many marvels of Hindu mythology are embellished in this temple carving. There are no tall gopurams in the temple, making it a perfect cave temple architecture to study for historians and ancient temple lovers. Following a Panchayatana style of architecture, this temple has an inner sanctum, Sabha Mandapa, and Maha Mandapa with ineffable emblazonments.

Located in the Mandya district, Sri Ranganathaswamy Temple in Srirangapatna is a beautiful manifestation of the Hindu God Vishnu. This temple showcases the resting posture of Lord Vishnu in the most wonderful way. Devotees throng to this destination to worship their ineffable Ranganathswamy or Lord Vishnu. Although this temple was built in 894 AD, there have been many empires who have improved the architectural appeal of the temple. From Hoysalas, Vijayanagar, Hyder Ali and Wodeyars Dynasty. The artistic qualities of the temple indirectly explains how important was architecture and art to the Vijayanagara Empire. There is a common belief that devotees who visit Shivanasamudra, Srirangapatna, and Srirangam on the same day, will attain moksha, that is liberation from rebirth. Nimishamba Temple, Tipu Fort, Jumma Masjid, and Gosai Ghat are popular attractions near this temple.

Hope, the five ancient temples of Karnataka fulfill your quest to explore the best spiritual destinations in India. More lists to come in the series, that will trigger your divine side to visit the must-visit temples of India.

Plan ahead for your 2021 holidays in India and make sure to communicate your doubts and choices with Indian Panorama.