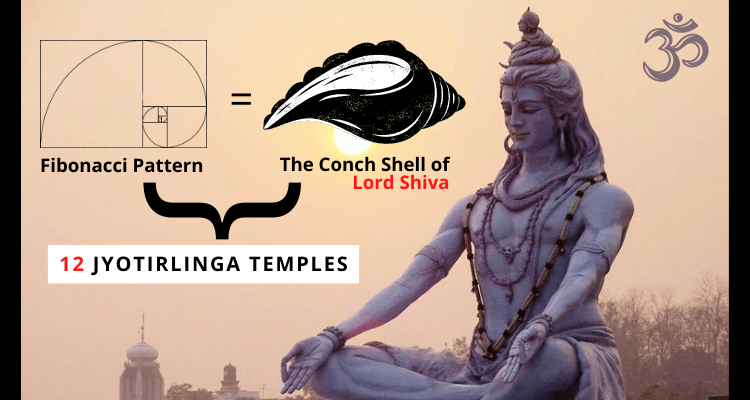 If deciphering is an art of the western world then encryption is a powerful sorcery of the eastern world. Especially, India remains as a mystery to geologists, archaeologists, paleontologists, historians, and mathematicians. What we going to decode or tell in detail is related to an ineffable mathematical phenomenon. The Fibonacci Series or Fibonacci Pattern. The same genius mathematical pattern popularized by the Renaissance artist of Italy. Most of us know about his all time beauty “Mona Lisa”, currently in Musee du Louvre or the Louvre Museum in Paris since 1797. But only a certain amount of the global population are familiar with “Vitruvian Man”, the geometrical brilliance.

The Oldest Language and Lap of the World – Tamil Part 1

What’s the Connection Between 12 Jyotirlingas in India and Fibonacci Series?

The sequential spiral shapes of these 12 temples are shaped like the Conch Shell of Lord Shiva. The nature’s secret code is hidden in this growing Fibonacci pattern. Take a look at the picture below.

This interesting connection is only a mystery for human beings but not for Nature. This is known as the divine proportion and is usually represented by the Greek Letter φ (pronounced as ‘fie’). A few believe that the Parthenon in Greece is said to have been built keeping this golden ratio or divine proportion in mind. But accurate readings deny this made up theory. But what about Jyotirlinga Temples of Lord Shiva? Do they follow a Fibonacci pattern or the so called divine proportion?

The Oldest Language and Lap of the World – Tamil Part 2

Yes! Lord Shiva Temples built in the ancient times follow the laws of Nature and this time it is the Fibonacci Pattern. It is believed that he had appeared as a column of fire/light in these 12 places. Similarly all the five holy Lord Shiva Temples starting from Kedarnath to Rameshwaram are built on the same longitude of 79° E 41’54”, another mathematical beauty which we will discuss in a separate blog. Coming back to Jyotirlinga Temples backing up the Golden Ratio of 1.618, this geometrical magic is often used by Greek architects, famous painters like Da Vanci and Michael Angelo.

Madurai and Pandyan Kingdom and Lemuria

Fibonacci in The Greek Body and Other Natural Occurrences

The dream physique for many, in fact Ian Fleming’s James Bond has also flaunted a similar physique in the movie Casino Royale released in 2006. Such following for achieving that golden ratio is also anticipated among women actresses like Scarlett Johansson. The Divine Proportion is always an honor to have around.

A Quick List of Golden Ratio in Nature and Architecture

10 Cleanest and Beautiful Beaches in India

Where to travel other than Goa for celebrating New Year 2021?

Mysteries of Ajanta and Ellora Caves – The UNESCO Monuments

Science behind the Cosmic Dance of Lord Shiva

Most of the ancient sites in the world in Egypt, Peru, India, and countries with some of the advanced cultures have monuments, temples, or spiritual sites complying with the most important law of nature: Fibonacci Numbers.

But what was it called before or who came up with this concept first? The man who first introduced this to the world was Pingala Rishi. The number was not Fibonacci but Pingala Number. The poetic tones and rhythms set in the 2nd century Sanskrit poems describe how beautifully Indians were connecting creativity, mathematics, and poems in the ancient era. As early as 2500 years ago.

Rhythms in Konnakol and Tabla uses this pattern to please our ears in the best way possible. As a part of Chanda Sashtra, Pingala Rishi had long before spoken about our so called Fibonacci number. The legacy of Pingala was additionally backed up by Hemachandra before Leonardo Da Vinci drew the most talked about Vitruvian Man. Genius stuff, right?

The Mysterious Temples in India – Part 1

The Indian Connection of Fibonacci

The European Mathematician, Leonardo Bonacci is said to have been responsible for bringing up this concept of Fibonacci in the modern world. He had adopted the methods of Indians in his book – “Liber Abaci” to herald the world about the noteworthy mathematical inventions of India. He also mentions that the world of Mathematics of Egypt, Greek, Arabic, and Pythagoras are no match for the accurate calculations of Indians.

The Mysterious Temples in India – Part 2

The Positive Vibes of the Conch Shell

The rhythmic flow of energy spreading the radiant sign of the Almighty Shiva is not restricted to the Jyotirlinga Temples alone. But it is present even inside Lord Shiva’s favorite musical device – Conch Shell. That is why its blown to create positive vibes all around. “Sankha” (Conch Shell) means the pacifier of negative energies. Like, Jyotirlinga Temples located from areas of higher solar radiation to lower solar radiation in the Fibonacci Pattern, Conch Shell is able to improve the mood of a surrounding. Conch Shell is directly connected to prosperity, good health, auspiciousness, purity, and goodness. The sound it produces synchronizes with the sound of “OM” – The Holiest Sound of the Universe.

How to detox your body during lockdown?

You can even place a Shanka or Right Handled Conch Shell in your home to observe the positive energy of the Cosmos within a Conch Shell, in a nutshell.

Thanks for reading. Your support means a lot to us. Share your thoughts about this blog in the comment section below.

Visit the best Hindu Pilgrimage Sites in India with the help of guided tours from Indian Panorama.

Plan ahead for your 2021 holidays in India and make sure to communicate your doubts and choices with Indian Panorama.