The untold mysteries of Puri Jagannath temple in Odisha, India 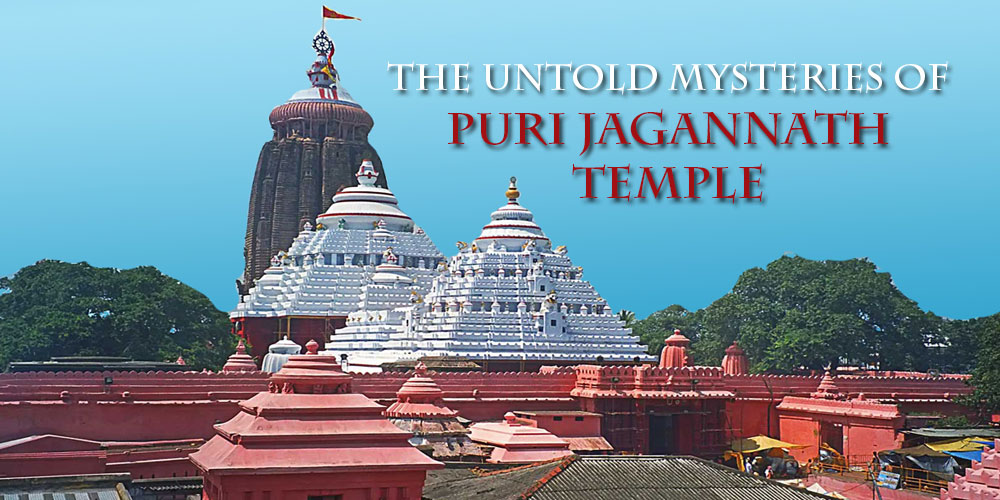 Famous for its annual “Ratha Yatra”, Puri Jagannath Temple is yet another mystery-draped ancient monument. The word “Juggernaut” in English was derived from the Hindi word, “Jagannath”. It means a colossal structure which crushes anything coming its way. It is rumored (may be a truth) that ardent devotees of Jagannath (Lord Vishnu) could have sacrificed themselves out of devotion into the moving giant structure. Every year, Lord Jagannath along with his brother Balarama and sister Subhadra come in three chariots to address the mass gathering of disciples.

Puri Jagannath is one of the “Char-Dham” in India (Rameshwaram, Dwaraka, and Badrinath are the other three). This conundrum filled historic temple is located in Odisha, India and three generations of kingdoms have contributed to its structure.

The present-day structure is way different from the initial one. It is believed that King Indradyumma had built the temple before 12 centuries (in 1078) but there is another “close to the true story” that tells about Anantavarman Chodaganga, the ruler of the Eastern Ganga Dynasty had finished the construction in 1161. The temple poses a predominant Kalinga Architecture now though Chola, the Tamil Monarch had an architectural impact on this temple.

Saints like Ramanuja, Adi Shankaracharya, and Ramananda had a powerful connection with this holy place. “Saptha Rishis” (Seven Rishis)had advised Pandavas going to Yamaraj to visit this particular Char-dham for attaining Moksha.

Is there something that works opposite to science or maybe greater than science? Your first answer would be no! But you may change your opinion a little after visiting Puri Jagannath Temple.

Second, the longest Shikara made of 8 alloys holds a Sudharshan Chakra which is 36 feet in circumference. This Chakra faces the avid watcher irrespective of the direction. An engineering marvel or divine force?

Third, no birds fly above the temple and no flights intersect this towering monument. Birds love tall structures and they circle most of the temple structures but Lord Jagannath’s Puri has a different scene.

Fourth, the shadow of the main dome remains invisible or doesn’t fall on the ground. This is a strange phenomenon as all the structures on Earth cast their shadows when they are out in the open.

Sixth, the wind blows from the sea to the land in the morning and from land to the sea in the evening but here Nature behaves in the opposite way.

Seventh, the priests of the temple have been carrying out a strange tradition since the establishment of this shrine. They climb manually without necessary climbing gears and change the flag every single day. And it is said that this ritual if missed will lead to shutting down of the temple for 18 years.

Eighth, the food prepared here from all 32 kitchens using 250 earthen ovens with the help of 6000 cooks and 400 assistants never gets wasted. No, the management doesn’t distribute the leftovers outside. The devotees ranging from 2000 to 20,000 per day unknowingly leave no leftovers. Simply put, the food quantity remains the same, but the number of devotees changes every day. But there is no scarcity of food or no food wastage.

The final one is that there are seven pots stacked one above other filled with Prasadham(Sacred Food). Firewood is used here for cooking. The topmost pot gets cooked first and the order follows defying science like other mysteries too.

Bus stops and railway stations are easily accessible from this temple. Auto rickshaws and local buses are available at frequent intervals. Biju Patnaik International Airport in Bhubaneswar is the nearest airport located at a distance of 49 km from Puri. You can catch direct, express, or super fast trains from Delhi, Kolkata, Mumbai, Tirupati, etc to Puri terminus. Buses from Bhubaneswar and Cuttack to this temple are available too. Youc an also travel in auto rickshaws, cycle rickshaws, or motorbikes at a reasonable fare within the city.

Histories and various cultures are the fuel to the Hindu spirit in India. That’s what makes the culture so extraordinary. So visit the Puri Jagannath temple in Orrisa and experience the mysteries in and around the temple with Indian Panorama and unravel the mystery of this holy spot through our spiritual tour packages.

Don’t forget to check these facts on your next trip to Odisha and share your experience with us.

3 responses to “The untold mysteries of Puri Jagannath temple in Odisha, India”