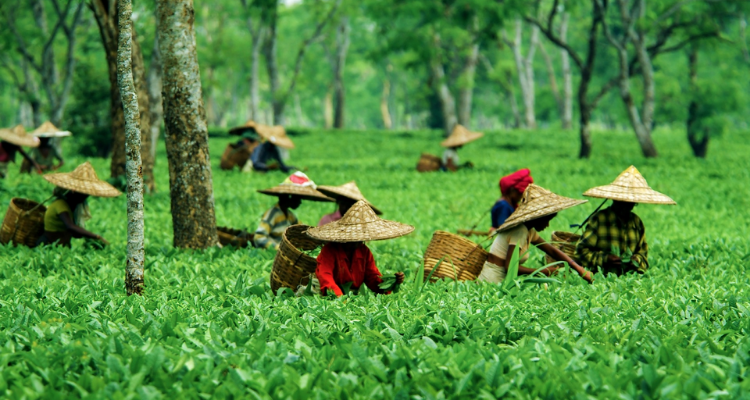 Dominated by forests and the masculine Brahmaputra River, Assam is beautifully sandwiched between the foothills of Himalaya and Meghalaya Hills. An ineffable state surrounded by forests, plantations, and paddy fields. Assam is India’s best oil zone and it produces more than 60% of India’s tea. There is mention of Assam in the great Hindu epic Mahabharata and it was called “Kamarupa” and “Pragiyotisha” during the first millennium. It is believed that Assam got its name from the Kingdom of Ahom which was flourishing from 1228 – 1826 AD. So, apart from tea, paddy, and One-horned Rhinoceros what else for travellers in Assam? Read!

Once visited by Mary Curzon, wife of Lord Curzon (known or partition of Bengal 1905) to spot one-horned rhinoceros, to her disappointment, she couldn’t find any. She asked her husband to fulfil her wish of seeing One-horned rhinoceros. Kaziranga National Park came into existence in 1908. In 1985, the park was declared as a UNESCO World Heritage Site. Swamp deers, elephants, wild water buffalo, and migratory birds roam along with the endangered pachyderm One-Horned Rhino.

#2 Majuli Island – The Largest River Island in the World

The largest river island in the world Majuli is an iconic treasure of the Indian state of Assam. Garmur is a great Vaishnavite destination to visit if you’re looking to learn about Neo-Vaishnavite teachings and ideologies. Likewise, Kamala Bari Satra is a confluence of cultural, musical, intellectual, and spiritual learning. You can downstream on the Brahmaputra River in a boat merging with the North Himalayan hymns like winds. Auniati Satra to know more about ancient tradition of Assam. Another must visit place in Assam is Tengapania Temple known as the Golden Temple of Assam. It is full of ornate works, statues, and beautiful pillars.

A temple in India celebrates womanhood and menstruation as its presiding deity is menstruating Goddess Sakthi. The shrine of this bleeding Goddess temple is situated in the capital city, Guwahati of Assam. Astonishingly during June, the colour of Brahmaputra turns red which is associated with a mythological tale. To pacify the anger of Lord Shiva, it is said that Lord Vishnu sent his chakra to cut the corpse of Sakthi into 108 pieces which fell on 108 places. They are known as Sakthi Peeths in India and the place where the womb and vagina landed is Kamakhya according to the tale.

Known for its brisk flavour, it is equivalent to an English Tea. It is believed that the Bodo Tribe of India has brought tea into Assam. However, a Scottish explorer named Robert Bruce found tea leaves growing in the wild zones of Rangpur in Assam. Initially, Assam Tea leaves were thought to be inferior to the Chinese Tea leaves but by 1838 Assam Tea leaves were off to London. By the end of 1862, Assam comprised more than 160 gardens. The weather conditions of Assam offer a rich, strong, deep-amber coloured, malty drink – the perfect early morning tea.

Bohag Bihu or Rongali gets its name from Sanskrit’s Vishuvam. It is when day and night are equally distributed via the vernal equinox. This spring festival is celebrated in the month of Bohag, the first month of the Assamese calendar. This year Rongali Festival will be celebrated between April 15th and April 21. The first day of the festival is called Garu Bihu while the rest of the festival is called Manuh Bihu. Garu Bihu is dedicated to cattle and livestock. Hundreds of Men and Women perform the Bihu dance connecting with the tunes of flutes and exciting music of Assam.

Ladakh festival- the festival that flaunts its cultural diversity

#6 Brahmaputra River Cruise: The Only Male River in India

Regarded as the “Son of Brahma”, the Brahmaputra River is a great geographical wonder in the Northeast Region of India. From the village walks, wildlife spotting, countryside exploration in cycle rickshaws, tea garden visits, making barbecue on deserted isles, dancing to the tunes of Assam, to learning from craft centres, Brahmaputra River Cruise is a beautiful experience to try in India. Take this serene river cruise and experience a remarkable voyage filled with silence, random turbulence, and rare sights of Ganges Dolphins.

Derived from the Sanskrit word “Maya” meaning illusion, Mayong is connected with a mysterious clan of Manipur, magical powers, and also the great Indian epic Mahabharata. Although there are several chilling folklores, mythological tales about human sacrifices in the past, and ghost stories, people believe even serious health issues can be cured by Mayong Black Magic experts. Copper Plates are primarily used talisman objects in these rituals. Travellers can spend some time in Mayong Central Museum and Emporium reading books on Ayurveda and Black Magic.

#8 Umananda Island: The Smallest River Island in the World

Nearby Guwahati, Umananda Island or Peacock Island is the world’s smallest inhabited river island. There are two mythological tales associated with this island. One being Lord Shiva creating this island for the happiness of Goddess Sakthi. Another legend explains how the Kama, God of Love was burnt into ashes by the Lord of Nothing and Everything Lord Shiva. Golden Langurs, the rare primates which are an endangered species roam on Umananda Island freely. Umananda Temple was built in 1964 by Ahom King Gadadhar Singha, a beautiful must-visit spot in Assam.

#9 The Ghargaon Palace: The Royal Seat of Ahom Dynasty

A beautiful spot to visit in the Sibsagar alias Sivasagar where the Ghargaon Palace was built in the year 1540 by King Suklemnung, the fifteenth king of the Ahom dynasty. Rajesshar Singha had rebuilt this iconic palace in 1762. The nearest attractions are Joysagar Tank, Talatal Tank, and Kareng Ghar. Many exciting underway passages were closed after East India Company took control over this place.

Dishes like Masor Tenga made of fishes and mangosteen slices, Omita Khar made from the extract of banana peel’s ash and raw papaya, white gourd with duck meat, Dhekelia Xaak dishes marking the arrival of spring, and Pani Hamuk made of water snails and pork meat is a rich delicacy in Assam. Assamese Thali, fish cooked in banana leaf, pitha, and Doi-Chira during Bihu are must-try dishes in Assam.