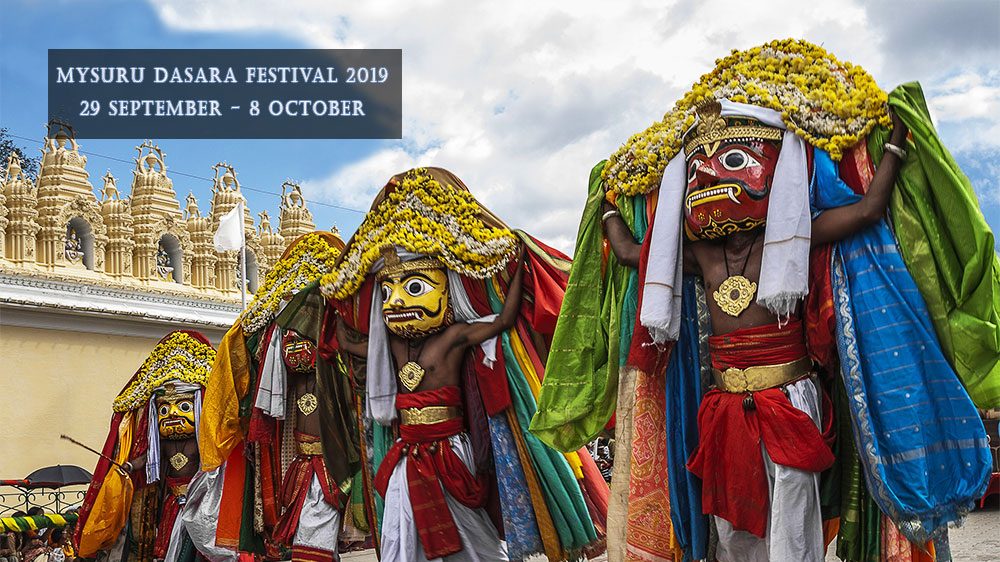 “A pompous festival that flaunts the richness of India”
Festivals are never ending at India, this land of colours and festive is never tiered of celebrations. These festivals are the key tools in attracting tourists from all over the globe. One of the prominent grand ceremony of India is the Dussehra festival celebrated at Mysore.

Dussehra is a ten days long festival celebrated all over India. But the city of Mysore celebrates it in an awe-inspiring way. This festival marks the victory of Goddess Shakthi over the vicious evil “Mahishasuran”. The regal city Mysore flaunts its beauty and richness during these ten days of the eve. Commonly this festival falls in the month of September or October and is widely known by the name of “Nadahabba” in Karnataka.

Folktales speaks of the valour of Chamudeeswari:

The legend has it that many million years ago, a powerful evil demon named Mahishasuran, ruled over the world and tortured the people to a great extent. Unable to bear his villainous acts, everyone prayed towards Goddess Shakthi to save them from his threshold. Heeding to their prayers Goddess Shakthi took the form of Chamundeeswari and slayed the demon Mahishasuran. And that day is been hailed as Vijayadasami. To praise the historic deed of Goddess Shakthi Dussehra festival is celebrated all over India for ten day, each day dedicated to any one avatarof Goddess Shakthi.

Why Mysore Dussehra is so famous:

Dussehra festival is been celebrated in Karnataka for more than 400 years. This celebration was introduced by the Vijayanagar Kings in the 15th century. According to their lore, in the ancient time Mysore was in threshold of the demon king Mahishasuran “Buffalo-headed”. In order to put a stop to his atrocities all the devas and disciplines prayed to Goddess Parvati. She took the form of Chammundeeswari and slayed the demon and threw his head on top of Chamundi hills. And the Goddess in order to suppress her rage, she decided to stay on top of the hill and graces to her devotees.  From then on, the city and the hill were known by the name Mysore and Chamundi hills. So the city of rich heritage Mysore, commemorated this ten days long festival in a very grand manner.

Highlights of the festival:

The spectacular view of the royal city Mysore during this festival is way too unimaginable. Every parts of the city is draped in colours and lights. The royal Mysore palace is the prominent venue of the Dussehra fest. Words are insufficient to describe the beauty of the lovely palace on the eve of Dussehra. The Palace illuminates in the night with its enchanting lights and spectacular decorations.

Foremost the festival begins once the royal couples offer their tribute to the goddess Chamundeswari at the Chamundi temple, perched on top of the hill. After that the festive mode is on at Mysore. Every parts of the city conducts dance and music concerts which attracts people from all over India and even from abroad.

Behold the parade of royal pachyderm:

The most noteworthy event of the festival is the enigmatic parade of the grandiose elephants, stately camels and aristocratic horses, it’s a sight to cherish forever. During this parade Goddess Chamundeeswari is beautifully adorned and is placed on a golden plaque which is carried out by a magnificent royal elephant. This spectacular parade is accompanied by vibrant music bands, dance troops and royal personals. The spectators too join in this torch light parade and procession ends at a final destination known as Bannimatap. At here the royal couples worship the “Bann” tree, which played a vital role in Mahabharata, and served as a hideout spot for the weapons of Pandavas.

Exhibitions and other entertainments:

Mysore Dussehra is not only a grand Parade to behold but a great time to fill your bags and empty your purse. Throughout these ten days of the eve, many important places at Mysore are swarmed with exhibition stalls that sells everything. Outdoor games and amusement rides also become the part of the exhibition.

The nearest airport to Mysore is located at Bangalore. Bangalore airport has connectivity to all domestic and international flights.

Mysore is 139 km away from Bangalore. Mysore has bus facilities from all major cities of Karnataka and from Chennai.