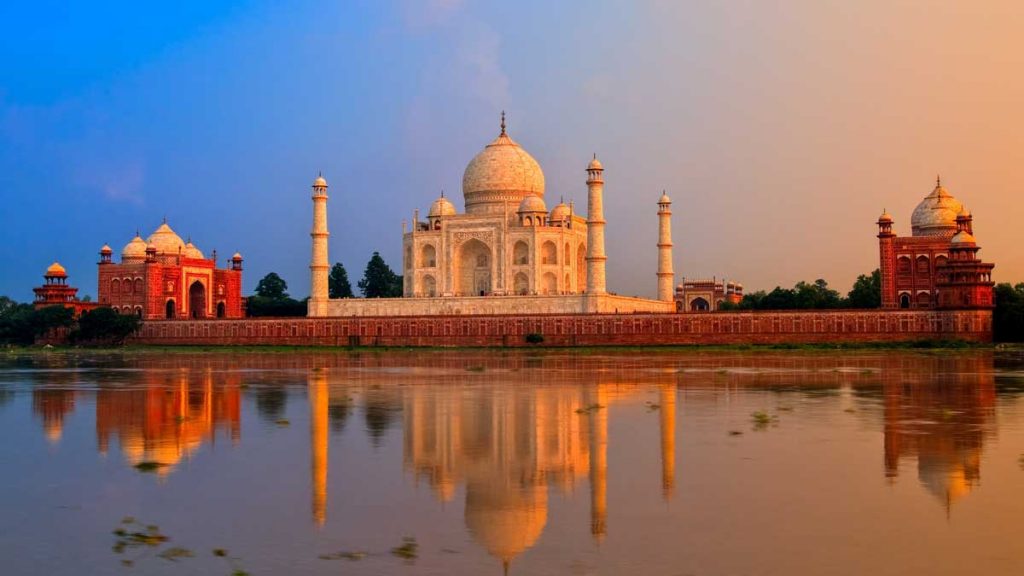 India, with its exceptionally rich cultural heritage, extraordinarily amazing architectural gems, and epic landscapes, is home to 40 World Heritage Sites – 32 cultural, 7 natural, and 1 mixed as inscribed by UNESCO, the United Nations Educational, Scientific, and Cultural Organization. These remarkable heritage sites lead visitors on an enriching journey through the history and heritage of the country.

Here is the list of the Most Famous UNESCO World Heritage Sites in India that you should definitely visit in 2023:

This is probably the most famous Indian heritage site recognized by the world. Taj Mahal is surprisingly an ornately decorated white marble domed mausoleum located on the banks of Yamuna River in Agra, in the Indian state of Uttar Pradesh. It is about 200 Km from New Delhi, the capital city of India. Mughal Emperor Shah Jahan built this immense yet impressive mausoleum in 1632 in loving memory of his beloved wife, Empress Mumtaz Mahal. It houses the tombs of Emperor Shah Jahan and his wife Mumtaz. In the year 1983, it was declared a World Heritage Site by UNESCO.

Also Read:- 20 Beautiful and Powerful Temples in Tamil Nadu to Visit with Your Family – Part 1

Carved out entirely from white marble with a striking blend of Persian, Ottoman, Indian and Islamic architectural styles, the Taj Mahal is one of the most admired masterpieces of Muslim architecture in the world. Due to its incomparable beauty and architectural skills, this monumental marble marvel is considered one of the seven wonders of the world. The arch-shaped entryways, the tall minarets, thousands of precious and semi-precious gemstones on the walls, the water fountains and the ornamental gardens contribute to the beauty of this stunning memorial. It is estimated that it took almost 22 years to complete the iconic Taj Mahal.

In Sahyadri ranges (Western Ghats), on the banks of the Waghora River near Aurangabad in Maharashtra, situates this UNESCO World Heritage Site of India. The Ajanta Caves are a series of 29 rock-cut Buddhist cave monuments that consists of 25 Viharas or residential caves and 4 Chaityas or prayer halls. It is one of the oldest heritage sites in India which dates back from the second century B.C.E. to 650 C.E. Ajanta Caves exudes the brilliance of ancient Buddhist rock-cut architecture, cave paintings, frescoes, and sculptures.

Also Read:- The 8 Mysterious and Interesting Temples to Visit in India | The Strangest Temples of India (Part 1)

The paintings depicting the life of Gautam Buddha, stories from Jataka Tales, and the rock-cut statues of different Buddhist deities form the prime attraction of Ajanta Caves. This ancient cave is believed to have been built during the time when Satavahanas and Vakatakas ruled the kingdom. It is now under the care of the Archaeological Survey of India.

The Ellora Caves was recognized by UNESCO as a World Heritage Site in 1983. Situated nearly 100 Kms away from Ajanta Caves in the Aurangabad district of Maharashtra, these monumental rock-cut caves depict ancient India’s artistic dexterity. The Ellora Caves constitute a set of 34 rock-cut religious centres for Buddhists, Jains, and Hindus, showcasing the bygone era’s timeless religious harmony.

Also Read:- The 8 Mysterious and Interesting Temples to Visit in India | The Strangest Temples of India (Part 2)

The Kailasa Temple inside Ellora Caves is considered the most outstanding architectural wonder in world history. A unique, astounding temple beyond belief, which is carved from a single piece of a gigantic rock, top to bottom and resembles a chariot. A must-see marvel. It is said to be the largest monolithic rock-cut temple in the world.

One of the finest examples of traditional Kalinga architecture, Konark Sun Temple is an incredible UNESCO World Heritage Site in India worth visiting. It is situated on the shores of the Bay of Bengal in Konark, Odisha. This marvelous temple dedicated to Sun God – Surya is a monumental representation of his chariot which has twelve pairs of wheels drawn by seven horses.

The wheels stand for the 12 months of the year and the seven horses represent the week while the day cycle is symbolized by the eight spokes in the wheels. And this whole depiction portrays how time is controlled by the sun – being the very illustration of the Surya in Hindu mythology who travels from the east in his chariot escorted by his charioteer, Aruna. Also called the Black Pagoda, the Konark Sun Temple in Odisha is built by King Narasimhadeva I in the 13th century. It is also regarded as one of the largest brahmin sanctuaries in India.

Qutab Minar, situated in the Mehrauli region of the capital city, Delhi is one of the famous UNESCO World Heritage Sites in India. Built-in red sandstone, it stands tall at the soaring height of 73 m and is noted as the tallest brick minaret in the world. This iconic monument was constructed by the Delhi Sultan Qutub-Ud-Din Aibak in 1193 immediately after the defeat of Delhi’s last Hindu kingdom. Hence, it is known as the ‘tower of victory’ which signifies the beginning of Muslim rule in India.

Qutab Minar is a masterpiece of Indo-Islamic architecture that comprises five storeys, each with unique designs and projecting balconies. The tower is so high that one has to climb almost 379 steps to reach the top. But it is worth the climb which offers sweeping views of Delhi city.

The Red Fort or Lal Qila was recognized by UNESCO as one of the World Heritage Sites in India in 2007 due to its geo-cultural impact and architectural brilliance. It is positioned in Old Delhi, along the banks of the Yamuna River. Built in 1639 during the reign of the fifth Mughal Emperor Shah Jahan, Red Fort is a beautiful melange of Indo-Islamic, Timurid, Hindu and Persian forms of architecture. The Fort complex comprises several other small buildings like Diwan-i-Aam, Diwan-i-Khas, Delhi Gate, Lahori Gate, and private pavilions.

The Red Fort got its new name due to its massive and impregnable red stone fortification. This is the historic place where the Prime Minister of India addresses the nation and hoists the Indian National Flag (Tiranga) on Independence Day every year.

Group of Monuments at Hampi, Karnataka

A globally-renowned UNESCO World Heritage Site in India, Hampi is a must-visit for every passionate history and architecture enthusiast. Marked by thousands of historical edifices including ancient temples, shrines, forts, gateways, halls, museums, water structures and more, Hampi is considered the largest open-air museum in the world. The magnificent and marvelous monuments of Hampi speak volumes of the grandeur of the erstwhile Vijayanagara Empire and also showcase the brilliant Dravidian style of art and architecture.

The beautiful ‘Vijaya Vittala Temple’ with its iconic stone chariot shrine, the majestic ‘Virupaksha Temple’, along with the fascinating ‘Musical Pillars’ that emit unique musical tones, as well as the captivating ‘Achutaraya Temple’ with its ornamentally carved pillars, make Hampi an incredible heritage site of India.

Group of Monuments at Mahabalipuram, Tamilnadu

The Group of Monuments at Mahabalipuram have been on the list of UNESCO World Heritage Sites in India since 1984, in view of their cultural importance and architectural brilliance. It has now become one of the most visited tourist attractions in Tamilnadu. It is positioned on the Coromandel Coast of the Bay of Bengal, near Chennai in Tamilnadu.

The Group of Monuments at Mahabalipuram were built by the Pallava rulers in the 7th and 8th centuries. You will find here intricately carved temples, rock-cut caves, and monolithic structures that showcase the superior craftsmanship of the Pallava dynasty. The Shore Temple, Pancha Rathas (Five Chariots), Krishna’s Butterball, Mahishasuramardhini Cave, Varaha Cave, Trimurthi Cave, Olakkanesvara Temple, Thirukadalmallai, Panchapandava Mandapa, and the Descent of the Ganges or the Arjuna’s Penance – one of the largest open-air rock-cut reliefs in the world are the major crowd puller among the Group of Monuments at Mahabalipuram.

The Great Living Chola Temples which include Brihadeeswara Temple in Thanjavur, Brihadisvara Temple in Gangaikonda Cholapuram, and Airavatesvara Temple in Darasuram are renowned for their impressive art and architecture. These three stupendously beautiful temples were built by the Chola dynasty between the 11th and 12th centuries.

Also Read:- Things To Do In Tamil Nadu

While all three are dedicated to the Hindu deity, Lord Shiva, it is their mind-blowing architecture that makes them stand unique from one another. These ancient temples of the Chola empire still observe the age-old rituals and festivities, held thousands of years ago, thereby keeping the ancient heritage and culture of the Tamilians alive. Hence, it is called the ‘Great Living Chola Temples‘.

Khajuraho Group of Monuments were built by Chandela rulers between 950 CE and 1050 CE. While there were around 85 temples in Khajuraho in the 12th century which were spread across an area of 20 square kilometres, only 22 have survived the test of time to constitute one of the greatest artistic wonders of the world.

If you’re taking a vacation to India, be sure to add these incredible UNESCO World Heritage gems to your travel list.

Plan for your 2023 holidays in India and communicate your doubts and choices with Indian Panorama.