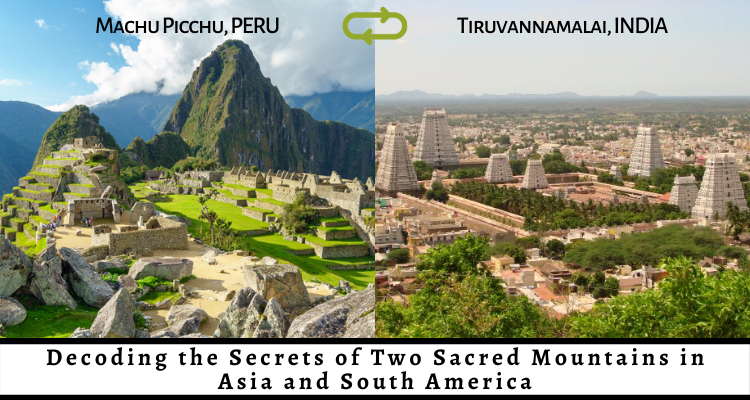 The town of Tiruvannamalai is a holy or mysterious place on earth, as the vibrations of its mountains are considered super sacred. The reason why Girivalam (circumambulation) at Tiruvannamalai is famous all over the world. To imbibe the holy vibrations, millions throng in for making the celebrations even more divine.

But this blog is not about temples, legends about fictional gods, and a bundle of myths without evidence. That is why Tiruvannamalai was mentioned as holy or mysterious. More significant numbers of the atheist population might agree with the mysterious factor more than the holy one. Not all who roamed this planet had lived an ordinary life without purpose. A few mortal men and women had transcended their earthly limits to stay immortal in the minds of people. In all religious and non-religious beliefs, some great humans had lived their life to the fullest for the benefit of humankind. Such people are given the status of gods and goddesses or leaders and icons.

The Mystery of the Mountains Unfolds

When Kanchi Periyavar (a renowned sage) was living in Tiruvannamalai, one of his ardent devotees have come to get blessings from him before his long journey to Mexico. Kanchi Periyavar mentioned the word – UNDERWORLD when his staunch believer spoke about his trip to Mexico. As the devotee didn’t saw this coming, he sat there patiently listening to the Sage of Kanchi. He began explaining the geographical connection between the two mountains. One is where both the sage and his devotee were present while the other one being Mexico, underneath, or in the most loved language – Underworld. He further explained about the in-depth knowledge of the ‘other end’ neighbors on astronomy and metallurgy. A civilization well-advanced as the Keeladi Valley and Indus Valley Civilization. From praying gods in a certain way to celebrating festivals, those on the other end of the planet had pretty much followed a similar lifestyle as the pre-historic people of present-day India.

Many of you foodies would have heard about Onam Sandhya. A surplus meal full of nutrients and delicious food items served in a banana leaf. It is believed that Mahabali, their adorable king would come to Kerala during Onam Sandhya as he wished. The legend of the Onam Festival will seem more real after you finish reading this blog.

The problem is people put a lot of efforts to either conduct blasphemy or develop insane extreme ideologies over belief. Take this example, Mahabali Asura who was the grandson of Prahalatha was spared life by Maha Vishnu (Vamana! In this case). Since Prahalatha was immensely drawn to the noble deeds of Lord Vishnu or a noble and people loving king. Even though Prahalatha had seen his own father getting tears into pieces by Narasimha, (take him as a fierce king or a badass ruler who’d do anything for the wellbeing of his people) he still remained loyal to Maha Vishnu. In this story, there is an act where Maha Vishnu measures all the lands of the earth and heaven with his feet and so Mahabali has to offer himself for the third step according to their ancient treaty.

As Maha Vishnu changed his heart and promised to spare Prahalada’s future generations, Mahabali is not killed but sent to a distant land. It is Panama in Central America. In an ancient Vimana, (flight) Mahabali had landed on the seashore of Panama. He gave rise to a similar civilization as in Southern India, in a foreign country.

Two questions will arise – how can a human measure the size of the earth with two steps? A poet would write like that but a historian understands the power of a great empire like Cholas, Genghis Khan, Alexander, and Ashoka who had ruled more places on earth with great power and temperament.

“Did you Miss Me?” – Mayan Calendar and Civilization

Leaders had thrown away great empires just like that since they had a majestic army, insane strategies, marvelous characteristics, and a sheer will to rule anything and everything. More such people with more kindness and humanity would have definitely walked this blue planet before and never in the world they would have thought, they would be the reason for much unreasonable hatred amongst the same species that dwell this planet.

Back to the core topic, Mahabali was accompanied by Mayan who belonged to the Asura clan. It is because of Mayan, the ultimate architect, many historical sights have started to pile up one after the other. Archaeologists like Dr.S.Padmanabhan have unearthed the hidden treasures of the Mayan civilization. (Yes! The reason for the panic back in 2012 where it just ended as panic and not a pandemic) ‘Incas’ clan people of the Mayan Civilization had worshipped the sun and a similar name is seen in the texts of Ramayana. Lord Rama or Noble King Rama had been given the title – Inan Kula Thilagan (Leader of the Sun Clan). Likewise, Cholas had also associated their empire with Surya Kulam (The Sun Clan).

Pyramids built for the purpose of worshipping in Mexico have similar counterparts in Kerala’s Kannur and Kozhikode as well as in Kanyakumari and Thoothukudi in Tamil Nadu. They are called as Aarattuthara in Kerala and Kaala Swamy (God of Time) in Tamil Nadu. Adding on, the word calendar is from the Tamil word “Calendarium” or “Kaalam” (Time). Mayans have worshipped Gods such as Em Simil and Ek Chuah who have 100 percent similarities with Yama (God of Death) and Lord Shiva (God of Everything and Nothing). The idol they had prayed has a spear and rope while Lord Shiva holds a trident draped by a snake along his neck.

Their Rain God holding the weapon of thunder looks similar to the Indira, the rain god of the prehistoric-India. The perfect replica of Thor in the Marvel Universe. The mountains near Mexico is full of Shiva Lingas, Hanuman Statues, and Garuda Statues yet to be unearthed fully. We’ll see more about how Mayans imbibed the most complex Yogasanas in their culture and to your surprise, King Ravana’s Father’s name is Mayan who was an excellent architect.

Can you recall the image of the Pushpak Vimanam carving in the 16th Cave of Ellora Caves – Kailasa Temple? Way too strong the interconnected cobwebs of history of two distinct civilizations in Asia and South America.

Learn about Machu Picchu on Part 2! Keep knocking the doors of Indian Panorama for information and explanation.

4 responses to “What’s the Ancient Connection between Thiruvannamalai in India and Machu Picchu Mountains in Peru? – Part 1”