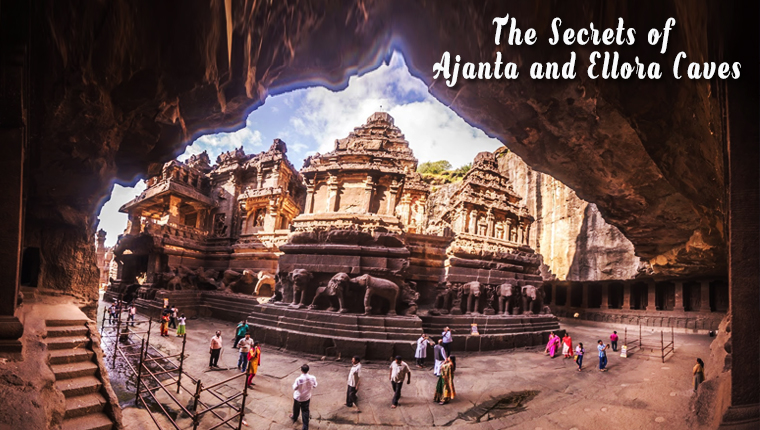 “The Cave You Fear to Enter Holds the Treasure You Seek” – Joseph Campbell.

History is often Half Mystery!

From the Edakal Caves in Kerala with neolithic petroglyphs to the holy Badami Cave Temple in Karnataka, every cave in India has its own surreptitious tale to enthral the historians, painters, sculptors, and architects of the world. But no cave in the world came close to the legacy of the Ajantha and Ellora sisters resting for thousands of years near the once Mughal territory, Aurangabad (The city was named after the infamous Aurangzeb) Many catastrophic injustices had occurred to the 29 caves in Ajanta and 34 caves in Ellora (The Divine-sculpted Kailasa is one among them) but none could completely destroy the murals, art, and soul of the caves.

Close to the trekkable Daulatabad Fort near Aurangabad in Maharashtra, the horse-shoe shaped Ajanta Caves built and updated constantly from the 2nd century BC to 6th century AD is just at a distance of 100 km from Ellora. While the oldest is Ajanta, “Verul-Leni” or Ellora is near to Aurangzeb’s wife’s mausoleum, “Bibi Ka Maqbara” (Dakkhani Taj) and Grishneshwar Temple built out of the red rock for the powerful Lord Shiva is an inevitable Shaivite pilgrimage site. Islam and Hinduism encircle the cave making it a true Unity in Diversity destination, both inside and outside the human-made marvel. It is clearly a UNESCO World Heritage Site and also requires the maximum attention from tourists, architects, restorers, photographers, Indians, and foreigners to approach this heritage in a responsible manner.

Michelangelo once commented, “Work of Angels” looking at the Parthenon in Athens, Greece. The artist would have stayed forever in India to find how the Rock-cut Kailasa Temple had happened which is sure “Work of the Creator of Angels”. Double the size of Parthenon, the Caves in Ajantha are completely draped in Buddhism while Ellora is a blend of Hinduism (17 caves), Buddhism (12 caves), and Jainism (5 caves). We’ ll see the must-visit caves lists with exact cave numbers, later.

This quote is essentially the heart of this write-up. To preserve and give the right amount of respect for a noteworthy place that takes in more than 4,000 visitors per day. The number must be cut into half since human breathing near the paintings are lethal as carbonization tampers the original inscriptions, storylines, and carved pillars. All the Earth colours, vegetable colours, Banyon bark, sawdust, hibiscus cannabis, horse manure, cow dung, and minerals used in an intelligent way to convey anecdotes, everyday scenes, and historically unforgettable happenings should not be erased just for the sake of puny bribes given at the entrance of these precious caves. Like mentioned before, people surrounding this area, employed or unemployed, Indian or foreigner must take care of the cave’s creative carvings.

Restoration Mistakes – The Dawn is Not So Far

The Architectural Survey of India (ASI) is really doing their best to restore the lost glory of the deteriorating paintings. Still, some zealous restorers combined with their poor varnish removal techniques have made notable damages to the paintings. Not only now, during the reign of the Nizams, the use of a distinct varnish, “shellac” by a renowned Italian expert L. Cecconi had also invited misery to the ineffable illustrations. The eroded surfaces of the deforested hills have contributed to the unwanted dust accumulation and ultra-violet rays have ruined some portions too. Soon, the Archaeological Survey of India will interfere and enhance the look and feel.

Why you should visit the 1000 year old Big Temple in Tamilnadu?

“Ruins for me are the beginning. With the debris, you can construct new ideas. They are symbols of a beginning.” – Anselm Kiefer

The Planet Focuses on Responsible Tourism

Paintings like the Black Princess and Apsaras are under a constant threat as more hours of spent by tourists standing close to it. Responsible tourism can only solve this issue along with intuitive and logical actions of the ASI. Luckily, the cave’s location saves it from constant nudging but from November to March, dance and music festivals stuff the premises. To save a monument, rules aren’t enough, responsibility is important to increase the life of a heritage site thereby conducting it to the future generations.

The gradual decay of the bonding element used in murals have come off as chunks and some paintings have even become chalky. SilverFish, a tiny insect is suspected to have eaten portions of the paintings. Biodegradation and Bat Excreta have played their role in destroying the monument’s signature works. Mass fumigation is a must to preserve the work of the alien-alike genius humans of the past.

Note: Flash photography is forbidden inside the caves. (As you know some places are beyond beautiful to be just photographed.)

Prasad Powar and his Contribution to the Ajanta Caves

“It is good people who make good places.” – Anna Sewell

Captain John Smith in 1819 had been into vandalism inside the caves knowingly or unknowingly. After incidents like these, the amount of restoration couldn’t save the amount of vandalism that had happened. Would you believe if a photographer had dedicated 27 years to digitally restore the paintings of the Ajanta Caves?

Meet Mr Prasad Powar (50) who has travelled to China and Sri Lanka to study the elements used in the painting and works with the sun. What? Yes, under the poor light conditions where highly emitting artificial lights are not allowed, Prasad Powar is making use of the sun’s natural beam falling inside the caves to digitally restore the lost statuesque of paintings like the famous Padmapani.

He has studied Pali, Marathi, Sinhalese, and Tamil literature just to understand the characters, their depths, and positioning significance to fix the missing parts of the storylines present inside the caves. He has been once honoured by the Buddhist sage, Dalai Lama and his IGNCA exhibitions about Ajanta caves is a dream come true mission. The intricate artworks cannot be refurbished as it is done for a dilapidated bungalow, the must-read storyline and intense emotions of the characters have a lot to share with the world and people like Prasad Powar are keeping its hopes alive.

His photographic documentation has covered 14,400 sq.m of the Ajanta Caves. He often wonders how our ancestors painted such a marvel in low light conditions whereas our technological world is no match for their hammers and chisels. The artist turned photographer isn’t looking for monetary aid from the government sooner or later. More people like him interested in saving the deteriorating monuments of India should come forward. While constant monetary help should be rendered by the Indian government for taking cultural tourism to the next level.

Catch the terraced pathway and enter the caves. Don’t miss the panoramic view from the “viewing platform”. You are inside a gifted monument that had been dedicated to Theravada and Mahayana Buddhism. Here are the must-visit caves with their numbers.

The sanctum here is full of Jataka Tales and outside the caves, a sick man, an old man, and a corpse are in the form of friezes to depict the life-changing moment of Buddha.

Dating from the 600-1000 CE, staying close to the Jalgaon Station, Ellora is a blend of Buddhism, Hinduism, and Jainism developed in the respective order. So, what are the must-visit caves?

By removing a whopping 200,000 tonnes (400,000 according to many) of rock, ancient sculptors of modern India had written their supremacy all over the Kailash Temple which is much more complicated and challenging than the Stonehenge and Pyramids of Egypt. While there is countless fiction related to this temple that it has been built in a single week which is humanly impossible, there are alien and humanoid theories too. To our greater surprise, there is the sculpture of Ravana and his “Pushpak Vimana” (modern-day Jet Pack). Its design is close to today’s technological flying machines. How would have they managed to think of sculpting such a structure when the world was still proud of its wheels? Millions of ciphered Sanskrit texts, everyday scenes, scenes from Mahabaratha and Ramayana, and tiny but detailed carvings, lifesize elephants, a Nandi facing Lord Shiva are all made from constant mindful chiselling that had happened over a period of 20 years according to historians and expert architects of the world.

The dedicated workmanship in the western Indian provinces of Maharashtra hundreds of decades before was believed to be backed up and constructed by Krishna I of the Rashtrakuta Empire. The Chandranandri hills carved from the top to bottom with the basic set of tools is impossible to build even in today’s world. Have you heard of the 10 Avatars of Lord Vishnu? Witness their prowess in the South-eastern gallery of this temple.

What should humans learn from Covid-19 to avoid bigger problems in the future?

Aurangzeb managed to destroy countless temples during the Mughal Era failed when his 1000 plus workers couldn’t deconstruct the Kailasa Temple. They could only disfigure some figures and statues. After years of trying, Aurangzeb gave up. Like he has surrendered to the mighty Lord Shiva.

Is Lord Shiva an alien? Is Ravana a humanoid? Were “Outsiders” helping human beings during the construction? We really don’t know. We’ll leave those things for you, travellers to study and analyze in-depth. Many have experienced mental clarity and improved physical health after visiting this temple and some other chaityas, stupas, and monasteries of these caves.

Inhale the positive vibrations in Ajanta and Ellora and shop handicrafts, ornaments, sculptures, and paintings before you fly or ride back home.

Get ready to experience ethereal happenings!

“The job of the artist is to deepen the mystery.” – Francis Bacon

Explore the surreptious cavernous corridors of Ajanta and Ellora Caves with Indian Panorama.