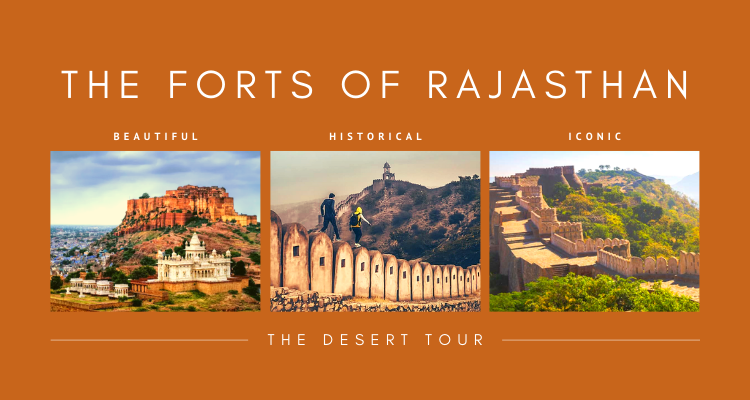 The craftmanship emblazoned in the chivalrous and exquisite forts of Rajasthan reverberates the royal past of western India. For those who love history and the concept of vintage architecture, forts of Rajasthan in India have deliberate answers. Every sturdy bastion, proud pillar, intricate carving in the ceiling, endless narrow passage, and the beastly battle fought still heralds the glory of one of the greatest royal desert kingdoms in the world – Rajasthan. The land of mighty mustaches, colorful cities, and fairytale-alike forts.

If you wish to travel Rajasthan, check out this updated itinerary before you consult with us for information and tour the Desert Kingdom.

Overlooking the Maota Lake, set on the Cheel ka Teela (Hillside of Eagles), Amber or Amer Fort is more than a fort. It is a school of art and architecture from the Rajputs, for the world. As early as 967 CE, Meena rulers began the inception of Amer Fort while Raja Man Singh I built the present-day fort in the 16th century. Sawai Jai Singh of the same Kachwaha clan made beautiful additions. Shila Devi Temple for prayers before the war, naturally cooling chambers in Shuk Niwas, the Hall of Pleasure to puzzled complexes leading to the kingdom of private life, from glittering public meeting halls Amer Fort is a timeless frame of Jaipur, the pink city. Know in detail about every exquisite corner of Amer Fort from the link below.

Mehrangarh Fort – The Fort of the Sun

Mehrangarh means the fort of the Sun while Rudyard Kipling famous for “The Jungle Book” novel rightly described Mehrangarh fort, writing – “A palace that might have been built by Titans and colored by the morning sun”. That is how elegant and elaborate this fort is on the blue city of Rajasthan, Jodhpur. As worshippers of the sun, the Rathore dynasty named this fort Mihir Garh, which slowly became Mehrangarh with the vocal touch of the local accent. Some believe this fort has a water scarcity curse. At the same time, geologists understand they are looking after a fort that stands on the formations of the last igneous activity belonging to the Precambrian Era. Cannonball reminders are etched all over the Mehrangarh’s walls, and the one pink remnant at Dedh Kamagra Gate from the Jaipur Army is the most famous. The Dark Knight Rises movie was shot in front of Mehrangarh Fort. The most beautiful fort in Rajasthan for its unique stature and history.

Jaisalmer Fort – The Crown of the Golden City

Named after the king of Jaisalmer Maharaj Rawal Jaisal (he built the Jaisalmer Fort in 1156 CE), the golden city of Rajasthan is famous for the authentic desert vibes of Rajasthan. A favorable entry point for the medieval Persian countries is still spreading the nomadic scent for camel safari and luxury tents tours. Jaisalmer Fort is also known as Sonar Quila or the Golden Fort because of yellow sandstone architecture. It is a living fort with many residents making a living within its fortified walls—a glorious blend of Mughal and Rajput architecture with a three-layered tricky wall structure. It had been used in the past to baffle intruders while attacking with boulders at the same time. The infamous yet powerful king Alluadin Khilji had captured this fort during his reign. But the most iconic destruction of Allaudin Khilji’s dream happened against the true warriors of the Chittor fort.

Chittorgarh Fort – The Icon of Beauty and Bravery

Built by Chittrangad Mori of the Maurya dynasty in the 7th century, Chittorgarh Fort is a symbol of sacrifice, bravery, pride, and beauty. In 1303, Allaudin Khilji seized this fort, but the events before the seizure are what the recent flick Padmavat is all about. A tale of desire, domination, retaliation, bravery, and sacrifice. When Khilji wooed Padmavat, the queen of King Ratansimha of the Mewar kingdom, it became a massive conflict between the small empire and one of the mighty dynasties of history. Rani Padmavat, along with the women of Mewar in Chittorgarh Fort, committed mass self-immolation (Jauhar) and has been one of the bravest sacrifices of humankind. In 1535, Chittorgarh Fort was captured by Bahadur Shah, and after Akbar‘s invasion, Chittorgarh Fort was ignored while a capital far in Udaipur was established. Rani Padmavati’s palace, seven gateways of entry, Vijay Stambh Tower, Suraj Pol, elaborate carvings of Varaha, Kumbha’s Palace legends of Bhima of Mahabharata, and Meera Bai, the ardent devotee of Lord Krishna are noteworthy attractions of Chittor Fort.

Useful Links: Places to see in India before you die | Five Traditional Markets of India

Maharana Kumbha’s Kumbhalgarh is an architectural marvel and one amongst the majestic UNESCO World Heritage Sites of Rajasthan. Eleven peaks of Aravalli Hill ranges support this elysian piece on Earth. The possessor of the second-longest fort walls in the world next only to the Great Wall of China. The architect of Kumbhalgarh Fort, Mandan, had built this majestic fort to register the prowess of Maharana Kumbha. The giant bastions, tapered thick walls for attacking without getting attacked, massive entryways that have the space for the galloping of 8 horses, super-sharp turns that had confused enemies for centuries, and the 36 km fort walls if covered fully will turn a fit traveler into a sturdy historian. Intricate temple carvings, the birthplace of Kumbha, Kumbha Palace, Neelkanth Mahadev Temple, which Maharana Kumbha had worshipped every day without fail, and Jain Temples are some of the places to see inside Kumbhalgarh Fort. A maid named Panna Dhai had sacrificed her son to save the young prince Maharaja Udai Singh.

Useful Links: Learn about the importance of Maha Shivarathri | Highlights of Rajasthan – The 3 Week Tour

In the part 2 blog, We’ll see Nahargarh, Ranthambore, and a few others less explored forts in Rajasthan in the coming weeks. Keep reading Indian Panorama blogs and follow us on Instagram and Facebook for regular updates and beautiful pictures of India with connecting captions.