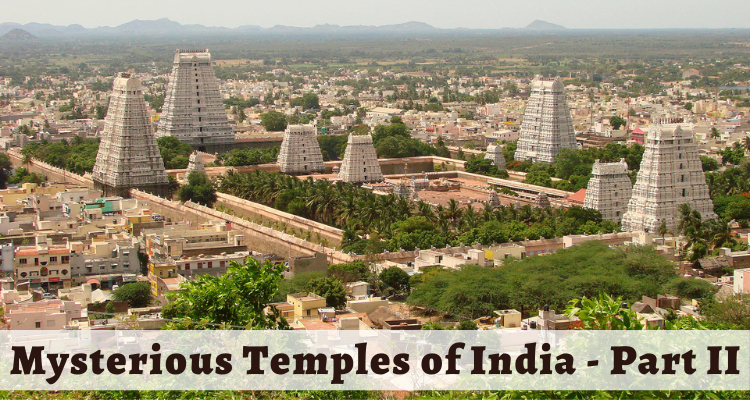 India not only has beautiful and interesting temples well-known all over the world for its architectural beauty but also a destination for frightening traditions and mysterious temples. There are temples even for Sachin Tendulkar, Sonia Gandhi, Amitabh Bacchan, and Ravana. A culture that celebrates and prays everything from non-living things to ineffable human beings. Here is a list of fearful, lovely, incredible, laughter-arousing temples in India. Which is your favourite one?

Is it possible for a mega pillar to hang defying gravity?

People tell two folklores for this unique temple in Deshnoke. One yarn depicts the rats as 20,000 children while the other describes the rats as 20,000 soldiers. Karni Mata is one form of the fierce goddess Durga. The rats in this temple are fed and maintained by the family of Deepavats. Some work in rotational shifts based on the lunar cycle while a few members stay permanently in the temple complex. The leftover milk of ‘Kabbas’ (little children), as they say, is seen as prasad to cure ailments and imbibe goodness to one’s family. If you have fear of rats, visit this temple of rats and emerge out fearless like the Batman conquered his fear of bats.

The temple disappears submerges in the sea twice a day

The Arabian Sea performs Jal Abhishegam on Shivlinga of Stambheshwar Mahadev Temple in Gujarat. Skanda Purana, one of the 18 Puranas of Hinduism speaks about this spectacular temple. It is believed Lord Karthikeya had performed pujas to the Shivalinga here to console Lord Shiva for killing the demon “Tarakasura”. Only on low tides, this temple can be visited for Aarti and Pooja since the temple’s shiv linga is submerged inside water two times in a single. It reappears again for further pacification from Abishegam. The temple is less than 80 km from Vadodara in Gujarat.

Channapatna Temple – Where God is Dog

The dog temple in Channapatna celebrates the human’s best friend, a unique temple just 60 km away from Bangalore. There are statues for the two dogs in the temple which were lost in a nearby village. Those two dog statues are said to drive away negative energy from the Agrahara Valagerehalli village. Every year, a unique festival is celebrated in honour of the two lost dogs. An opulent businessman has built this temple in the year 2010. If you are a dog lover, pray in this temple for a long life filled with happiness for your dog.

Devotees coming to this temple offer clocks to the deity. Brahma Baba of Jaunpur near Varanasi is an unconventional temple where a devotee would clock to get his wish fulfilled. A story goes by about a driver who prayed the Lord to give him good driving skills. As he was satisfied with the ease of driving vehicles, he had started the tradition of offering clocks. There are no priests in this temple and no one has ever tried to steal from this temple. Catch the sight of 100 plus clocks hanging in the temple tree and gift one too if you wish gets fulfilled. Jaunpur being an ancient settlement is famous for mosques and historical monuments too.

I don’t live in darkness. Darkness lives in me.

In the Dausa district of Rajasthan, Mehandipur Balaji Temple is a temple where exorcism is a habitual scene. Dedicated to the lord of strength, Hanuman, this temple is the abode of black magic and mysteries. A counter-curse destination where possessed people are treated. A spine-chilling treat for horror movie fans who’d love to see real exorcism. The shrieking voices of fear coming out of the temple the moment you step in will haunt you for ages. Definitely, not for the light-hearted souls. The redeeming god Hanuman is said to ward off evil spirits in humans. There are no prasad offering in this temple and those who visit this scary place are advised not to look back or carry anything back home. Will you visit this place? What’s your view on demons and evil spirits?

Fly away after you pray

Just 30 km away from the erstwhile Nizam’s territory Hyderabad, Chilkur Balaji temple is also known as VISA Temple. Sri Devi and Boodevi accompany Lord Venkateshwara in this temple. Devotees who cannot go to Tirupathi Temple visit Chilkur Balaji Temple as an equivalent alternative. Those who are trying to clear the VISA interview for flying abroad, visit VISA Balaji Temple to get their overseas dream fulfilled. There is no donation box to try shortcuts to reach the Lord too (pun intended). Devotees perform “11 Pradakshina” first and once their wish is fulfilled 108 Pradakshina is performed. Parikrama or Pradakshina means nothing but circumambulation of holy shrine to absorb good vibrations to the body.

The Timeless Throttle of Om Banna

Jodhpur, the blue city of Rajasthan famous for blue-themed houses and Mehrangarh fort (The iconic jump in Batman Begins was shot here by Christopher Nolan) has another unbelievable deity “Made Like a Gun”. A 350 CC Royal Enfield Bullet is the main deity that accepts liquor as an offering. The story of Om Banna who crashed into a tree and died riding this bullet is the starting point of this mysterious bullet deity. When the vehicle was confiscated and brought to the police station, it is said to have disappeared even after several tries. The bullet was found exactly at the spot where Om Banna had died. Since then this bullet god has become a regular praying spot of motorcyclists from all over the country. At night, people have reported hearing the sound of the engine starting.

If you feel terrified, amused, and felt goosebumps down the stomach and spine, you can tell us about it in the comments. We can go with another list of mysterious temples in India if you can help us create a unique list. Thank you in advance!

Temples of India to explore with your family and beloved ones.