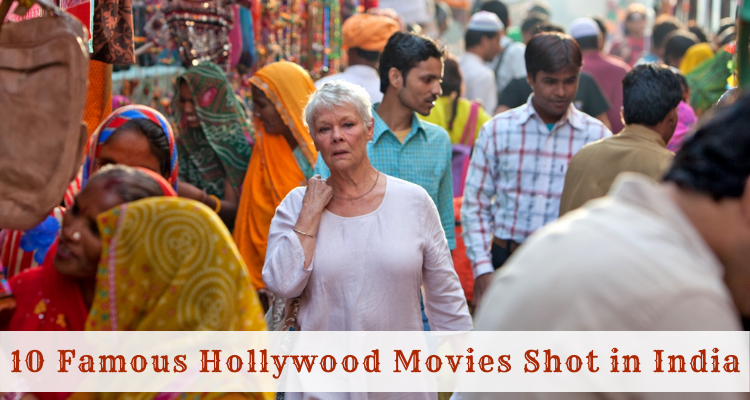 This blog will be an experiential or educational or emotional one solely based on the age of the readers. As the world is still under the locks of Corona, people are into binge-watching and movie marathons. To entertain you all with an interesting post, these 10 Hollywood movies shot in beautiful, unusual, and iconic locations of India are included in this special blog. How many locations have you been into? which film are you going to catch up from this list after you finish reading this blog? Write to Indian Panorama or comment below.

Let your visualization flow throughout the beautiful panorama of India.

Movie 10: Indiana Jones and The Temple of Doom – India is way better, Indy!

The world wouldn’t have forgotten the famous monkey soup scene (it was fake) and the bugs used (it was real) in “Indiana Jones and The Temple of Doom”. Although most of the movie scenes were shot in Sri Lanka and London, it is still a huge hit in India. This movie gets the 10th spot since it portrayed India as a land of snake charmers and black magicians. The fiery face of Amrish Puri who is after the human sacrifice is the ultimate misinterpretation and prejudice on Indian culture. The movie was based on India but only a few Indian locations were used in the movie. You will know more about the colorful and kind shades of India if you keep reading this entertaining piece.

Most parts of the movie were decided to be shot on Jaipur, the capital of Rajasthan.

From the Indian version of Bond Music orchestrated with a flute to action scenes in the streets of the white city, Udaipur, James Bond roamed the royal corridor of Rajasthan. Along with Vijay Amirtaraj, the Tennis Legend of India (he played the role of a trusty ally), Roger Moore would explore Udaipur in a typical Indian autorickshaw. The Monsoon Palace served as the exterior of the antagonist Kamal Khan’s Palace while Octopussy’s palace scenes were shot in Jag Mandir and Lake Palace of Udaipur. Lake Pichola reflects the image of Lake Palace and is one of the romantic sunsets in India to watch with your loved one.

An emotional movie of a 5-year-old child who gets adopted by an Australian Couple living in Tasmania and his desperate attempts after 20 years to get back to his family in India. The City of Joy – Kolkata is the main location of the movie along with Khandwa, a semi-urbanized area in Pune of Maharashtra and Australia. The typical Indian train journey of the young boy to Kolkata, the famous tourist landmark Howrah Bridge, teahouse Flurys on park street, the vintage vibes of North Kolkata, Bengali’s 130-year-old heritage site Basu Bati, and colonial charm is rightly captured in this movie. Howrah Station and Shamila Station are captured with utmost reality in this movie.

The iconic Railway Network of Kolkata is beautifully showcased through the arduous journey of Saroo.

The story based on “Toomai of the Elephants” by Rudyard Kipling from his 1893 novel Jungle Book was shot in Mysore and at London Films Studios in Denham. Robert Flaherty, the Irish-American director accepted Rudyard Kipling India was vast, varied, exotic, and mysterious. The animals of the Royal Zoo under Mirza Ismail and Chitranjan Mahal as living quarters were utilized in this movie. The most memorable thing that happened during the Elephant Boy (1937) movie is that Mrs. Flaherty astonished by the hospitality of India wrote to her daughter that India was far different from what they have imagined and also that the character of India was remarkable. Maharaja of Mysore‘s elephant stable boy went on to become an international star in London after The Elephant Boy.

As Abu and Mowgli in “The Thief of Bagdad” and “The Jungle Book” respectively, Sabu starred as the leading character.

The second-most visited state in India after Tamil Nadu, Rajasthan is the prime shooting location of “The Best Exotic Marigold Hotel” movie. Ravla Khempur is the hotel shown in the movie where the courtyard scenes were shot. The movie was filmed in Jaipur, Udaipur, and Khempur, which has the functioning Ravla Khempur Hotel. The hotel hosts winning Marwari Horses, and so horse riding is available too. A few scenes were shot in Kishangarh, which is outside of Amer Fort in Jaipur. Jampacked buses, Marigold Market area Panna, Jagat Niwas Palace, Lal Ghat of Udaipur, and Meena Ka Kund Step Well in Amer.

The group enjoying drinks in a hotel terrace overlooks Lake Pichola of Udaipur and their stay location is Taj Lake Palace Hotel.

Dany Boyle’s movie, which made AR Rahman an international sensation with the help of two Oscars, is also a below-average portrayal of India. Dharavi, the biggest slum of Asia, was taken as the central plot to add justice to the most hackneyed rags to the riches yarn. Although an incomplete and partially prejudicial depiction of India, Slumdog Millionaire increased tourists’ arrival to Dharavi. Taj Mahal in Agra is also a vital part of the movie, where the protagonist is shown as a fake guide. The climax portion of the film, along with the hit Jai Ho song, was shot in Chhatrapati Shivaji Terminus, aka Victoria Terminus in Mumbai.

Jamal’s life and unusual travel experiences help him answer all the questions in the quiz game show and later meet his love in the end.

Movie 04: A Passage to India – The Ideal Frames of India

Director David Lean, famous for his epic “Lawrence of Arabia” film, directed his last film “A Passage to India” in 1984. The fictional Marabar Caves shown in the movie are Barabar Caves in the Jehanabad district of Bihar. The story moves from London to Mumbai, and what’s unbelievable is statues similar to the ones in Khajuraho Temple in Madhya Pradesh that were carved in almost identical shapes for the film. Chandrapore Railway Station, shown in the movie, is Dodballapur Railway Station, 23 miles North of Bangaluru. The Bangalore Club, one of the oldest clubs in the city close to Richmond Circle, was used to shoot a tea-time of two British female characters. The Military Contonement area, Bungalows of Bangalore, and St. Thomas Church (shown as Chandrapore Church in the movie) of Ooty The film gets a dramatic ending set in the Jhelum River of Srinagar in Kashmir. As a beautiful Indian location finder, David Lean has tried to show the fascinating mystical aspects, natural religious harmony, and how India, as a nation is connected, with all living creatures.

A locomotive running in Nilgris Mountain Railway was repainted to bring in the aesthetics for the film. Such beautiful picturesque portrayal.

“Every little place in the country is so fascinating that you feel like making one film after another.” This is what Wes Anderson, the director of “The Darjeeling Limited” said about India. A spiritual journey of India uniting three brothers on a train through the state of Rajasthan. A similar experience of this part of vast India can be enjoyed in a luxurious train like The Maharaja Express. The moving train is itself a brilliant character in the movie. Wes Anderson’s love for the colorful character of India was felt in the aftermath of the movie. In fact, Anderson would have fallen for the blue city of Rajasthan, Jodhpur during the shoot. Originally, this movie was decided to be shot in Darjeeling.

As Anderson and his unit couldn’t find enough light in the surroundings of Darjeeling, the movie was shot in the vastness of Rajasthan.

After an outrageous divorce, Elizabeth Gilbert is on a quest to conquer the best for her life. Three Countries – Italy, Indonesia (Bali), and India. In India, she lives for three months in an Ashram and learns meditation and practices Yoga every day. Richard, who is from Texas, helps Elizabeth to get rid of depression and pointless encounters with her past. On her attempt to find the spiritual side of life, she visits the Hari Mandir Ashram in Pataudi of India. The power of prayers in a country like India is a beautiful depiction in this Romantic Comedy flick. Mirzapur, where Richard and Liz have tea, is on the banks of the River Ganges. An archaeological and historically rich spot that has paintings on rocks similar to those in Spain. If you wish to learn Yoga in the best way possible, Rishikesh is the best place (A Bungee Jumper Destination too).

There is also a rumor that the writer of the movie had spent four months in Gurudeva Sidha Peetha in Maharashtra.

Movie 01: The Dark Knight Rises – A Heroic Sunrise in Mehrangarh

Rudyard Kipling, the famous Jungle Book (Another movie with an Indian Plot and Characters) novel writer, wrote: “A Palace that might have been built by Titans and colored by the morning sun.“ Surely, Christopher Nolan would have felt the vibrations of this quote, and that’s why the iconic film director had traveled all the way to Jodhpur. The fascination to shoot the colorful cities of Rajasthan shows the love for India’s vast and varied landscapes in Hollywood. When Batman (Christian Bale as the protagonist) is struck inside the Chand Baori stepwell just like Bane (Antagonist of the movie), he does an impossible climb. He jumps without a rope to rise in front of the already lit Sun’s Den Mehrangarh Fort. Mehrangarh means – The Fort of the Sun. Look at that incredible shot!

Just like the Dark Knight rising out of the impossible, humanity will conquer the Coronavirus soon to make way for restarting exploration throughout the world. Travelers need to visit themselves at this time and find harmony in their homes to grow more than life. As we all know, touring India will only get better after COVID-19 rests in hell. To all the human lives lost in the battle against Corona, we are still going strong to restore humanity wherever whenever possible.

Keep yourselves safe and ready. When the time for traveling comes, our pounce should send happiness as tremors throughout the planet. As it is understood, The blood of travelers is a little thicker than other creatures. Showtime soon!