Into the Records! Welcome the 38th UNESCO World Heritage Site of India – Jaipur 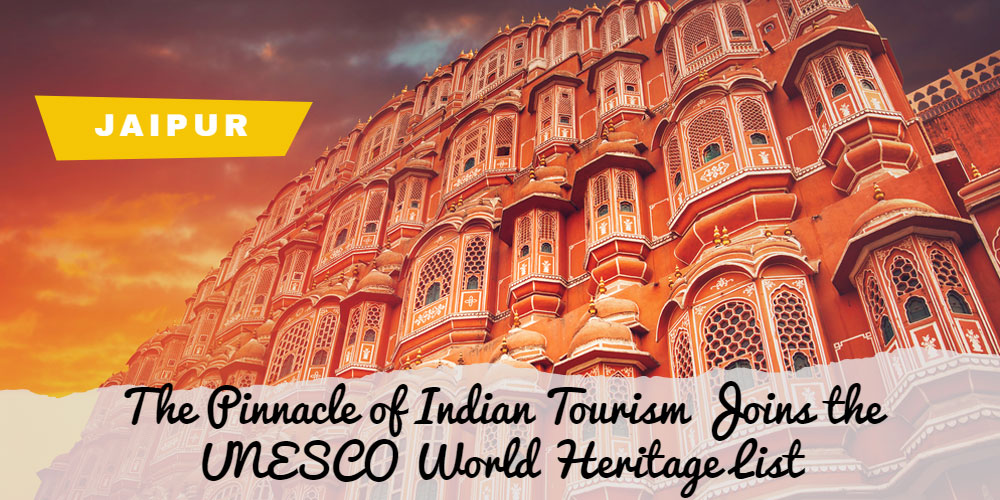 A proud moment for all Indians as Jaipur, the Pink City becomes the 38th World Heritage Site in India. The 43rd session of the World Heritage Committee held at Baku, Azerbaijan heralded the world a new UNESCO World Heritage Site – JAIPUR. The fort corridor of India earned this prestigious achievement with the help of its legendary monuments such as Hawa Mahal – Palace of Winds, Govind Dev Temple, City Palace, and Jantar Mantar.

The result of a foresighted city planning of an 18th-century city is filled with extensive craftsmanship, ubiquitous artistic and architectural qualities. We should extend our thanks to countries such as Bahrain, Brazil, Cuba, Kyrgyzstan, Zimbabwe, Burkina Faso, Indonesia, Kuwait, Azerbaijan, Guatemala, China, Tunisia, Bosnia and Herzegovina, St.Kitts and Nevis, and Angola. Norway and Australia first proposed referral but after a healthy discussion, Jaipur City was unanimously selected.

Info: The ancient fortified and planned city, Jaipur in Rajasthan was founded in 1727 AD under the backing of Sawai Jai Singh II.

Out of 38 UNESCO sites, 30 belong to the Cultural Heritage list, 7 belong to the Natural Heritage list, and there is 1 mixed site. Prahlad Singh Patel (IC), the Union Minister for Culture mentioned his joy about the inclusion of Pink City Jaipur to one of the esteemed list. He had congratulated the people of Jaipur on behalf of the prestigious tag. He had extended his eulogy to the Global Community for honoring the cultural and historic importance of Jaipur.

The mini excerpt of the proposed statement of the Outstanding Universal Value (OUV) in front of the World Heritage List Committee – Jaipur city is an epitome of urban city planning which is far different from other medieval places of the same region. The result of deliberate planning of a new city on the plain landscapes unlike hilly terrains and military cities. Uninterrupted and undulant terrains south of the Amber Hills are not only the product of futuristic planning but also an ingot of indigenous monuments.

Jaipur in Rajasthan is a wonderful destination that everyone must visit to witness the grandeur of its brilliant lanes that can turn back time.

The daring Prime Minister of India, Narendra Modi expressed his happiness in his official twitter handle. He had replied to UNESCO’s official Twitter handle.

Jaipur is one among the few cities that stands as an example of the concept of unity in diversity. ‘The Hindu population along with Mughals and Westerners have worked out a concrete plan to develop one of the unique cities of all time’.’ This is what UNESCO said about Jaipur in the prestigious meet. The idea to honor the marvels of the 292-year-old-Jaipur designed by Vidyadhar Bhattacharya, the Bengali Architect was initially started in 2015 during its nomination.

The ancient city of forts, valor, and orange hues is a place to experience the rich cultural heritage of India.

Join the celebration along with the people of Jaipur and India during the eccentric Pushkar Camel Fair. Jaipur isn’t just a UNESCO World Heritage Site but a combination of colors, forts, and authentic people. “The Golden Triangle” is one gorgeous travel pack that covers Rajasthan along with Agra and Delhi.

Golden Triangle Tour is the classic short tour of the North of India with the best photo opportunities in the land! Delhi, Agra and Jaipur together make up India’s Golden Triangle. This short tour will show you India’s capital, the Taj Mahal and the fantastic colorful cities of Rajasthan like Jaipur, Jodhpur, Jaisalmer, and Udaipur.

If you are looking for a memorable trip to India, Indian Panorama will be the right choice for you to experience the finesse of the royal past of India.

Rajasthan and Golden Triangle Tour are a favorite among global travellers who are wishing to visit India, to experience the majestic bygone era of the beautiful country.

Our connection with five-star hotel groups and authentic guides have made Indian Panorama immensely proud in the yesteryears. The gesture is continuing even today with more bookings of the world-famous travel pack – “The Golden Triangle” and other customized tour packages.

6 responses to “Into the Records! Welcome the 38th UNESCO World Heritage Site of India – Jaipur”