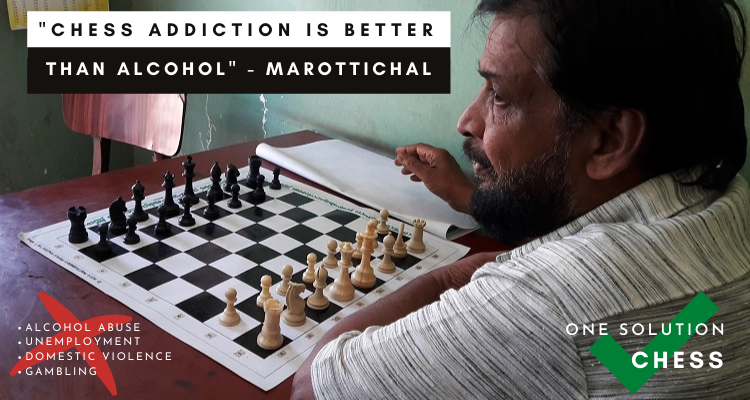 If there is one place on earth that survives although suffering from addiction, then Marottichal in Kerala is probably the only place. They have managed to recover beautifully from their alcohol addiction with the help of 64 squares and 32 coins. The ancient game of India which was born in India, Chess, is saving a complete village from going broke. Iconic figures, Bobby Fischer, Paul Morphy, Steinitz, Mikhail Tal, Vishwanand Anand, Kasparov, and many other sensations have created a strong impact in the world through their timeless moves.

One such equal wave was created by a Tea Master named C. Unnikrishnan in Kerala. His desperate attempts to recover his people from the demons of alcoholism have been a grand success to date. What was before a hood of hedonists and gamblers, is now a brood of out of the box thinkers; professional chess players. One man changed their lives forever. He plucked alcohol out and moved their soul with his interesting moves on the chessboard. The inspired 6000+ villagers are the living epitome of how healthy addiction can bring peace to the world.

“On a chessboard, you are fighting, as we are also fighting the hardships in our daily life.” – C. Unnikrishnan, Marottichal.

The useful pastime of Marottichal has saved families from going bankrupt and reduced domestic violence due to excess alcohol consumption. Now, every family has at least one person who will be a pro at chess. They have slowly inculcated the habit of chess, making it a healthy alternative for alcohol and other illegal substance abuse. Like many other tiny hamlets of Northern Kerala, Marottichal was also suffering from illegal activities, unemployment, and substance abuse. Unnikrishnan changed the fate of his hometown using the ancient game of India. Chess was originated in India in the 6th century, since then it has been one of the favorite pastimes of the world.

Unni Krishnan aka Unnimaamens’s tea shop became the place for chess battles between the villagers. There was a movie even taken in Mollywood – August Club inspired by the village of Marottichal. Baby John, the President of the Chess Association of Marottichal is super confident about his village becoming an example for the world. From five-year-olds to eighty-year-olds, everyone is flocked in this chess destination of Thrissur, the cultural capital of Kerala.

The Image of Marottichal had changed for the better, after the game of Chess and Saji, the secretary of CAM is ready to accomplish the “Mission Chess Sampoorna” where young students are taught Chess and classes are taken for all those who are unaware about the beautiful game.

The Ancient Connection Between Machu Picchu and Tiruvannamalai

According to Anatoly Karpov, another chess legend, Chess is sport, art, and science. In this case, Chess is the savior and immortal help guide to the village of Marottichal. This chess village is an inspiring example for villages and people covered in gloominess and melancholy. Just a change or addition of a new routine can bring immense health benefits and positive impacts on our environment.