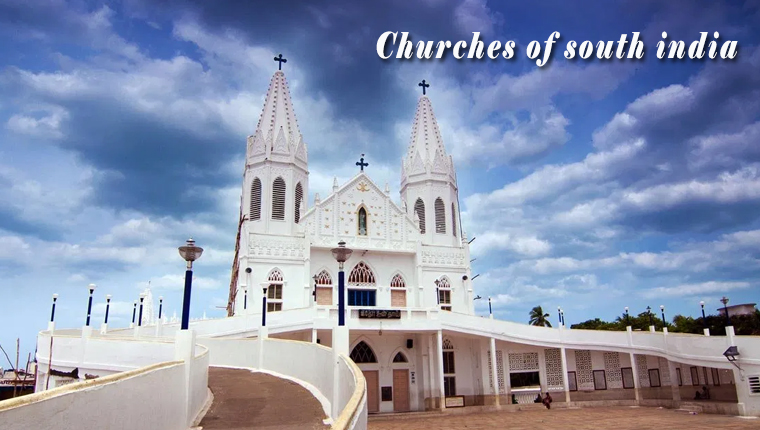 The arrival of Apostle Thomas in Kerala, India around 52 AD introduced the concepts and rituals of Christianity to Kerala and India. The gorgeous churches of South India still carry the erstwhile aura of the Dutch, Portuguese, French, and British settlements. Kerala is attributed to more number of beautiful churches (in fact, Syro–Malabar Catholic Church of Thrissur is the oldest in India) in India. Yet there are breathtaking cathedrals and churches in South India which comes under the less explored tag. The coastal corridors of Tamil Nadu, the busy IT zones and heritage hotspots of Karnataka have the renowned style of Baroque and Gothic architecture.

What is Gothic Architecture?

The “Rib Vaults” full of intricate geometrical patterns in highly arched ceilings and “Flying Buttress” extending from the wall’s upper portion to a segmental arch and quadrant arch that acts as lateral support. Gothic followed the Romanesque Architecture and then Renaissance Buildings came in evolving into Baroque in the 16th and 17th centuries. The circular Rose Windows, Stained Glasses, and illustration of biblical stories in the realistic exterior statuaries are prominent characteristics of the Gothic Architecture.

What is Baroque Architecture?

Roman Catholic Churches and palaces of Spain, Italy, Portugal, France, and Austria came up with the idea of decorating their churches combining the basic elements of the Renaissance Era. The inclusion of colonnades, domes outside the church with dramatic elements while involving “Quadratura” (illusionistic paintings on ceilings) and “Trompe l’oeil” which gives a three-dimensional feel on the inside. The eyes are drawn to the highest point in the church, the ceilings bestow the heavenly atmosphere to seekers of the Almighty.

After architectural differences, there is always a question lingering around the minds of non-Christians and even some Christians. Let us split those questions into three and answer as precisely and clearly as possible.

THE DIFFERENCE BETWEEN A CATHEDRAL AND CHURCH

The ‘Cathedra‘ in which the Bishop sits and diocese under his jurisdiction is what maketh a Church, a Cathedral. It is all about the Bishop and it has nothing to do with the grandeur architecture or fancy interiors.

A church is run by a priest or pastor and it undergoes a permanent congregation. It refers to both the physical space and religious assemblage of folks for worship too. A church can be as decorative as Sagrada Familia in Barcelona and can operate without physical space too.

A chapel is simply smaller than a church and has physical space for worship and wedding ceremonies. More often, a chapel can resemble a room and will have no priest or pastor or permanent congregation.

While Minor Basilicas are found all around the world. They get recognition and approval from the Pope on the basis of history, spirituality, and architectural importance. Any Church can get the highly celebrated Basilica status, provided the expected parameters and Pope’s acknowledgment is present.

Here is the informative list of 10 beautiful churches of South India that find a definite place in the stunning church tour itinerary. These imposing figures carry the mood of pride showcasing India’s Unity in Diversity. This quick read is a gentle reminder of the oozing secularism and neutral mindset of India.

The second tallest church in Asia came into existence due to the generosity of Maharaja Krishnaraja Wodeyar III. Initially, a small church was built for a congregation of the small amount of Christian population. While Maharaja Krishnaraja Wodeyar IV backed up the construction of a larger church which was built in 1933. The story of Saint Philomena is full of sanctity and devotion to Almighty. Her brave refusal to marry the Roman king ended her life since then the 13-year-old Philomena’s tale spread all over the world. Daly, a French architect designed this church. Explore this church which speaks about the secular nature of the rulers of Mysore in the past.

The expansion of North and North-East areas in Coimbatore during the 20th century saw many Catholics settling down on the south side of Sanganallur Palam (now called Gandhipuram). This church was made of well-shaped blocks of stone and this parish (a tiny district under the administration of the church) came to Ganghipuram in 1955. This is a huge landmark in the middle of the Manchester of South India, Coimbatore. Visit this holy Church which was blessed on December 23, 1962.

Visit the Kappal Matha Church in Uvari in the Thirunelveli district was built in 1974 after the destruction of the original St. Mary Church due to Sea Erosion. Young maidens had gone to the nunnery on one occasion while some of the residents have seen a bright light glowing though there was no candle surrounding the statue of St. Mary. The day September 18 is celebrated as a festival here since then. Selvamatha (St. Mary) is taken in a chariot around the town. The Church is in the shape of a ship carrying an airplane. A unique construction that deceives people to think it is floating in the water when viewed from a distance.

1895 built Gallo-Catholic architecture of Trichy’s Our Lady of Lourdes Church speaks secularism standing close to another colossal monument, Rock Fort Temple, surrounded by 3.8 billion years old rocks (older than the Himalayas). This is a replica of the church by the same name in France. Master Dhanam Savarimuthu’s immense contribution to this Church had reserved him a holy place under the altar of the church. The 200 ft tall spire of the church is visible when seen or clicked from anywhere around an 8 km radius. The church is close or once should say adjacent to the famous St. Joseph College where the late President of India A.P.J. Abdul Kalam had studied.

Explore this church of miracles is full of beautiful backstories that involve the Madurai Nayaks, St. Francis Xavier, and many selfless saviors. The mass holy conversion of the “Paravars” (Pearl Fishery Coast’s indigenous people) gave them a livelihood. “Yelu Kadalthurai, Yega Adaikala” was the name given to Our Lady of Snows (The Mother of the Refuge from the Seven Coastal Hamlets). Thiruchendur, Vaippar, Thoothukudi, Vembar, Virapandianpattinam, Punnaikayal, and Manapad. The statue of Our Lady of Snows carved out of wood is not only famous for its elegance but also for the talisman properties it beholds. This church attained the status of a Basilica on 30th July 1982 after the apostolic letter from Pope John Paul II arrived.

The Pastoral province of the Poondi Village in Thiruvayar Thaluk of Thiruvallur district near Thanjavur has the Poondi Matha Church (Our Lady of Lourdes Basilica, Poondi). The church became the fourth Basilica in Tamil Nadu on August 3, 1999. During 1714-1718, Veeramamunivar (Rev. Fr. Constantine Joseph Beschi S.J.) built the “Mary Queen of Immaculate Conception”. The Miraculous Lady of Poondi statue sits on the dome of the church. This holy church is famous for having the statues of 12 Apostles of Jesus, a relic of the original cross, the blend of Gothic and French architecture, and the miraculous lady of Lourdes statue made in France.

The artistic walls of Kochi adorned with revolutionists like Che Guevera in Doti, sprawling cafe houses and delectable fish curry just entered Lonely Planet’s list of top 10 places to visit in 2020 around the world. Santa Cruz Basilica had gone through many remodeling and reconstruction since it came under the Diocese of Kochi. The second oldest Diocese (District under the Bishop’s Jurisdiction) in India. On May 3, 1505, the well known Portuguese Viceroy, Francisco De Almedia sought permission from then Cochin Raja to erect the Santa Cruz Cathedral. However, the present church was built on 19 November 1905. During 1984, Pope John Paul II gave this Cathedral the Basilica statuesque for its brilliant carved out Gothic-styled ceilings, sensational history, antiquity, and pastel-colored bright interiors. Famous Italian Painter – Fr Antonio Moscheni and his ardent follower from Mangalore De Gama made the timeless altars in this Basilica. While the recreation of the scene from “Last Supper” is the linchpin art of this scenic cathedral.

The Apparition of the Virgin Mary in the sacred town of Velankanni is believed to have earned the name Our Lady of Good Health. The Holy Mother of Good Health and Our Lady of Vailankanni are the other names for this church. Three significant miraculous events had happened near this church, the first near the pond involving a Hindu Young Boy and his ever filling pot of milk near the Matha Pond, the second involving a crippled young boy of a widow and a catholic gentleman (Builder of the initial shrine) while the former got cured of his illness praying Virgin Mary, the third one involves a Portuguese Merchant Vessel which conquered the storm due to Portuguese sailors praying Virgin Mary. After reaching the shores on September 8th on the birthday of the Virgin Mary they transformed the shrine constructed by the last Catholic Gentleman into a Chapel. This earned the Basilica statues on 3 November 1962 after Pope John XXIII acknowledged its spiritual importance and spectacular history, merging it with the Major Basilica of Mary in Rome.

The prayers of Palliveetil Meenakshiamma to save her child when they were struck in a monstrous flood got answers from Vallarpadama or Our Lady of Ransom. From then Vallarpadama (The Mother who resides in Vallarpadam) became the savior god who was sincerely worshipped by the fisherman before going to the sea and travelers before heading to a different destination. During 1524, world-famous Portuguese explorer Vasco Da Gama dedicated a chapel to the Holy Spirit. It was washed away along with the picture of Our Lady of Ransom during a flood in 1676. Cochin Maharaja’s Divan (Paliyath Raman Valiyachan) recovered the picture and gave his land and donated a “Kedavilakku” (sanctuary lamp) to the church, The descendants of Paliyath are keeping the lamp eternally glowing even today. Revered Pope John Paul II gave the Basilica status in 2004 owing to the happening of incredible tales in the National Shrine Basilica of Our Lady of Ransom. The same year the church was declared as a National Shrine.

The highly respected Apostle St. Thomas had built the original church during his entry to Kerala in the 6th century to preach Gospel. The initial construction was completed in 594 AD in the land of the Edappally Raja. This spiritual structure faces the Arabian Sea and the ancient church remains there close to the St. George’s Forane church built in 1080 AD. Mother Teresa had visited this church in 1994 for the 14th centenary celebration. The well water here is said to remain the same and people believe it can cure ailments. While a few people believe the soil of the Church Compound has the power to restrict the entry of serpents. This church is locally called Edappally Church and contains the largest shrine of Saint George in Asia. This church looks like it is from some sort of imaginary world, the ethereal mythological statue of Saint George slashing a serpent under the horse’ hooves is the proof. History, art, folklore, architecture, magic, religion, and curative powers are equally balanced in this palpable place of worship.

There are many shades of cultural practices in India. Whatever happened or happening cannot shatter the unbreakable bond between the people of India. While turmoils are natural around the world, India is a living example with countless states, cities, traditions, and religions all stuffed together to form one unique nation. Christianity’s expansion in a country like India makes it vivid, this sacred land celebrates the whole world of good thoughts and respects every other individual. Amidst calamities, spiritual tranquility prevails in the row of churches, mosques, and temples hugging each other in the streets of India.

Travel to the churches of South India with Indian Panorama for a fortnight and tell us about the experience and emotions felt during your amicable journey and stay in India.