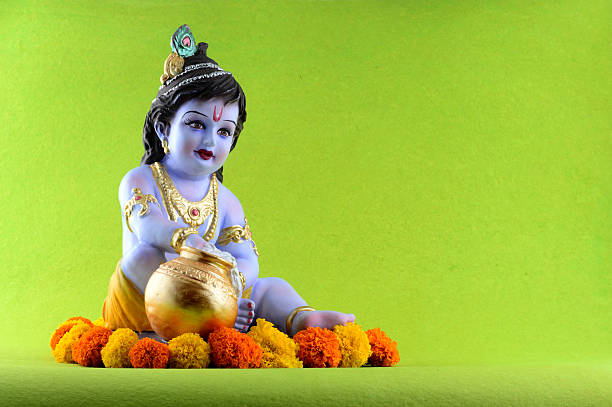 Gokulashtami is celebrated to denote the birth of Lord Krishna, who is the eighth incarnation of Lord Vishnu. The Hindu Mythology has got the most significant place for Lord Krishna. Krishna was born to Devaki and Vasudev where Devaki was the sister of the demon King Kamsa. As per the boon he got from the Almighty, all his mistakes will be tolerated until Devaki, the sister of Kamsa gives birth to her eighth child. So, when Vasudev married Devaki, Kamsa was so vigilant that he grabbed the child whenever she gives birth to one and killed it right away. When Devaki gave birth to her eighth child, she was in the prison. Vasudev, quickly shifted the child to another place and thus saved its life. The child is none other than our Lord Krishna, who reincarnated himself on the eighth day of the dark fortnight in the Tamil Month Avani with the star Rohini.
Yashodha and Nandhagobar were the new parents for Lord Krishna, where he grew up graciously. Krishna was a very naughty child, doing all sorts of mischiefs and getting punishments from the elders without disclosing that he is the ultimate God ! He enjoyed being with the children and women, and grew up making everybody around Him happy. All the mischiefs done by Krishna are elaborately discussed in the Hindu epics, Carnatic songs and it is quite common that every mother in India looks at her son as a form of Lord Krishna. In most of the Indian families following the Hindu traditions, the bed time stories will have Lord Krishna and his deeds as the epicenter. 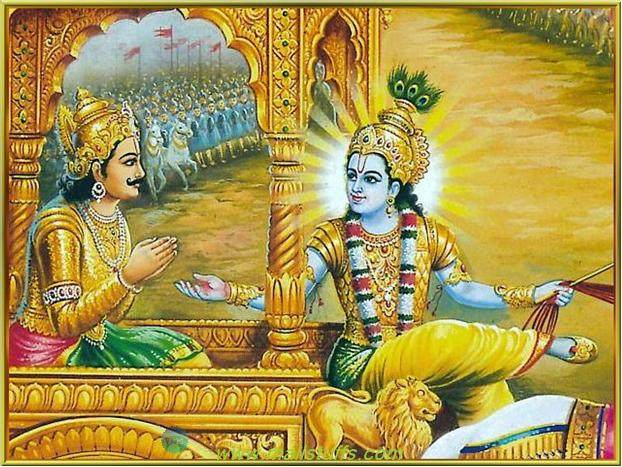 Years went by, When Krishna became a close associate of the Pandavas, He tried to avoid the war between them and Gauravas, explained in detail in the Hindu epic Mahabaratha. As Gauravas were very stubborn, Krishna took the side of the Pandavas and guided them to progress in the Kurukshetra war, which lasted for eighteen days.

Let it be a myth or reality, the lessons we learn from the Kurukshetra war is that “Only the Righteous will win”. Krishna appointed himself as the driver of the chariot for Arjuna, who was third among the Pandavas. While Arjuna was engaged in the war, Krishna preached him about the ethical and moral values a human being has to follow in this materialistic world to become immortal. The entire preachings took the form of a Holy book called Baghavad Geetha, which is considered to be a very sacred one by every person following Hinduism. Baghavad Geetha has eighteen chapter with thousands of verses and in each verse, Lord Krishna explains the duties and responsibilities of a human being and the do’s and don’ts of life, facts about birth and rebirth. Baghavad Geetha is revered as a treasure by the people following the principles of Hinduism.
Gokulashtami

It is no wonder that Gokulashtami is celebrated in a grand manner in everyone’s house as He is the ultimate one having taken the form of Child. It is especially a very important festival in Sri Vaishnavism as their presiding deity is always Lord Vishnu.. 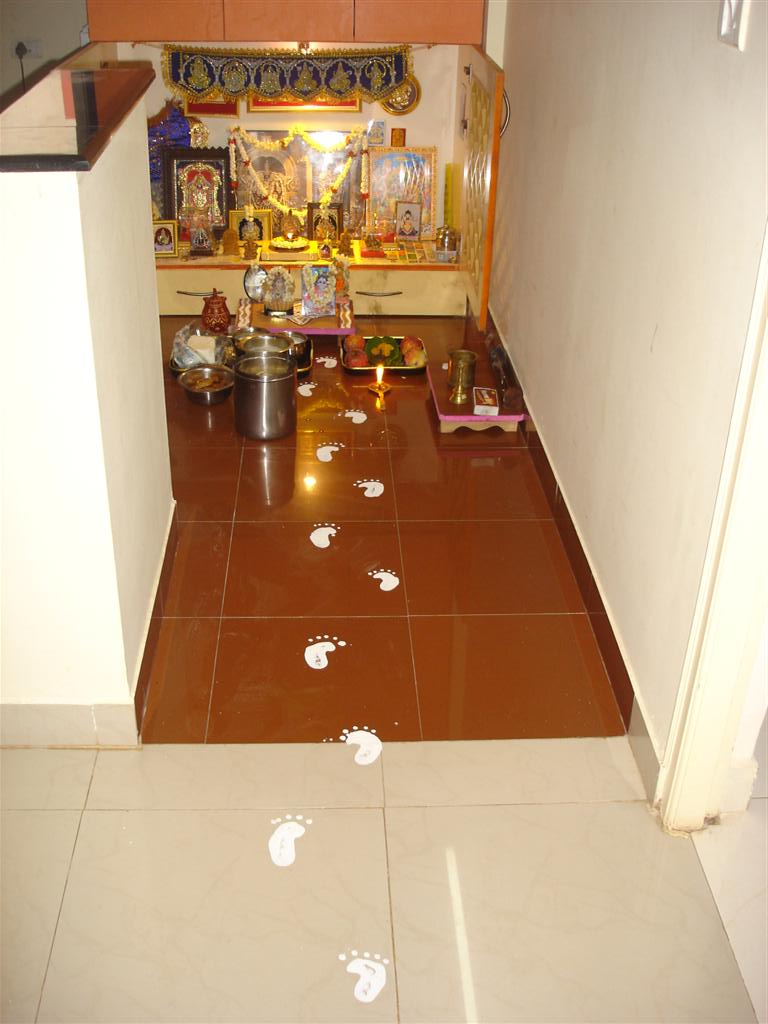 Days before the festival, moms become busy in preparing the delicacies loved by Krishna. They are Sweet Seedai, Kaara Seedai (both of them are small balls made of rice flour), Thattai (a flat circular shaped dish made of rice flour and Gram flour), Appam (a lemon sized sweet ball), butter, ghee and fruits. It is known to everyone from the epics that Lord Krishna is an addict for butter. The philosophy of Hinduism is so beautiful that, people need not fear for God, they need not praise Him, they can simply get his grace by giving Him what He likes the most. That is, every family treats Lord Krishna as a member in their house.

On the day of the festival, houses are decorated with mango leaves, beautifully drawn Kolams (drawings made of rice flour). One highlight of Krishna Jayanthi is that, Lord Krishna is invited to every house, take the offerings from them and bless them, this is the bottom line of the festival. So, in every house, you can see the foot prints of Lord Krishna drawn to approach from the door step till the Pooja Room. Sometimes, the cute tiny foot of the newborn babies in the houses will be soaked in the rice flour to make the foot prints look realistic ! How nice it will be to see the foot steps all through the way and when you reach the Pooja room, people may even feel the presence of God there !! Even in today’s nuclear family lifestyle living in Apartments, we can witness Lord Krishna’s foot steps traveling through the lift to enter His devotees houses !!

Children will enjoy the festival with these kind of celebrations and delicacies. In most of the houses, the youngest child will be dressed up as Lord Krishna, and will be given special attention. Ladies sing the songs in praise of Lord Krishna, distribute the snacks to the neighbours. Temples wear a festive look, special poojas and rituals are conducted to celebrate the birth of Lord Krishna.

Unlike in South India, Janmashtami is so colorful that plenty of dishes are offered to God, cultural programmes are conducted at common places with friends and families joining together. There is one more highlighted event of this festival called “Uriyadi”. It is a traditional and incredibly fun fare game originated from Tamil Nadu. It is usually conducted in front of the Vishnu temples. There will be a pot filled with money or gold, hanging in the air and people have to smash it with a pole keeping their eyes closed. Those who hit the pot and breaks it, is the winner of the contents in the pot. This is the last item in the agenda for the Gokulashtami, with which the festival comes to an end. 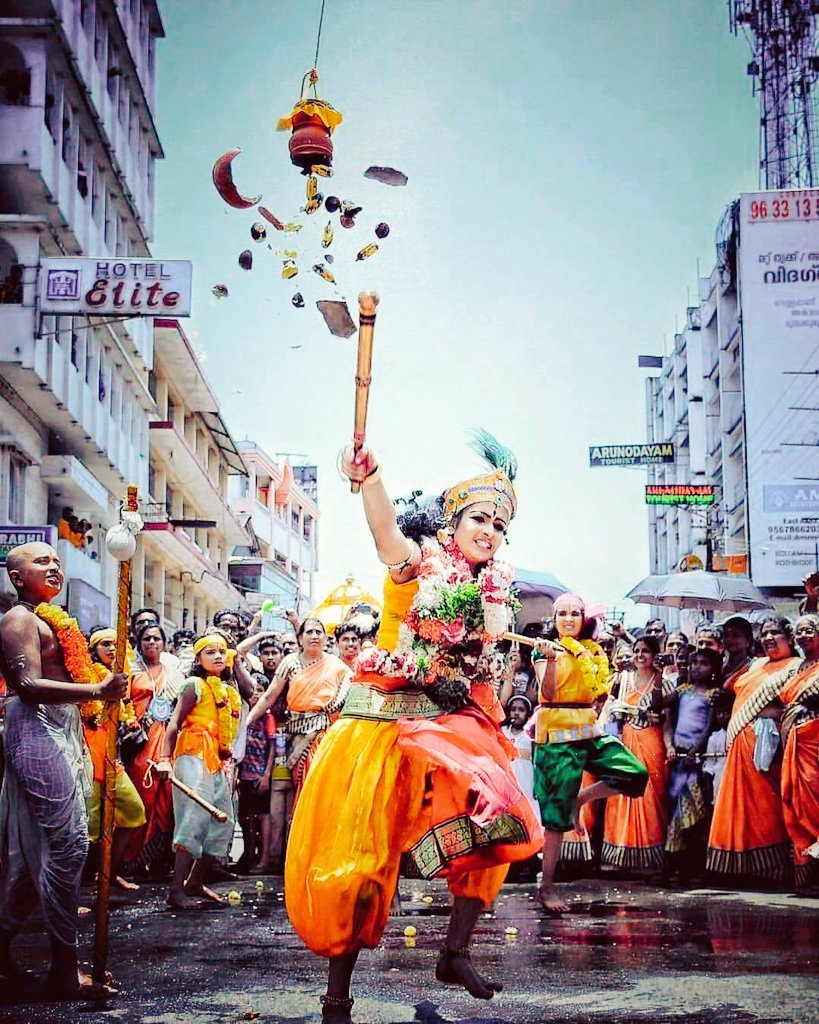 Thus, as all other festivals, Janmashtami is also observed to ensure the harmony among the friends and families and lead towards a peaceful life, which will take the humane near to God, the supreme power.
Be a part of Gokulashtami or Janmashtami, wherever you are in India, it is synonymous to celebrating the arrival of a newborn to our houses !