TAMIL, the oldest Language and Lap of the world | The Masters of the Oceans – Part 1 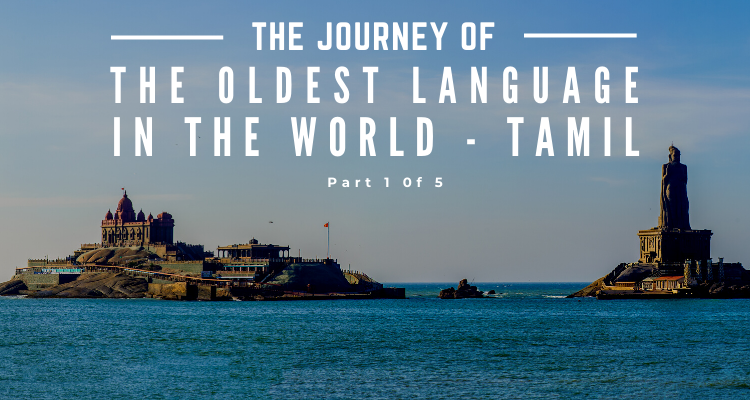 Before you begin this blog, skim this blog about Madurai, the oldest living city in India and read this one with yet another strong cup of coffee. This blog series is a mix of facts and records of noblemen and noblewomen. The views and ideas might contradict with another set of people and so a healthy debate is always welcome! Get in.

The Ineffable Legacy of Tamil Language

Why is the world after Tamil? Not only the language and its customs but everything about Tamil is a learning for the world. From using palm leaves to predict the future of creating a beautiful statue of idols using nine types of poison, this land is something ineffably inexplicable. The number of unexplainable carvings and pillars in temples, paintings in caves, magic in hill stations, and scientific discoveries using essential elements of Nature prove one land and language came before other human brains became complete with their cognitive development. TAMIL.

Would you believe if we tell you a place known as Madurai in Tamil Nadu has its brothers all around the world? The same name in different countries and continents.

This blog series is an attempt to unearth the lost statuesque of a language the whole world spoke 18,000 years ago or from the last ice age. Many scholars and archaeologists have found useful research materials and proofs to take this strong language closer to finding actual written records. One can say, Tamils united the seas using trade and the first trading language of the world was Tamil. But a truth goes unnoticed when there are no substantial proofs, i.e. physical proofs. In this journey of digging the secrets of the world’s oldest language, we shall identify truth from landscapes, mountains, colours, letters, temples, and from everything excavated above the earth that connects Tamil. For example, in the capital of the land of the rising sun, Japan, Shinobazu Temple at Tokyo has a secret in the form of a bronze emblem speaking about a lost civilization. Take a look at the picture below.

More than 24 places in the world have been named Madurai, the oldest living city in India. Why would England call one of its towns as Salem which is a prominent city in Tamil Nadu? How Tamil became a salient connector of the rest of the world?

A Pioneer in Life Science and Literature – Tamil

The whole world of scholars and intellectuals would accept reading Thirukkural and understanding its concepts will ensure harmony in the world. Thiruvalluvar, a Tamil poet, wrote it in the Tamil Language. Tholkappiyar wrote Tholkappiyam, the first book of grammar and regarded as the eldest of all language grammar books of the Second Tamil Sangam. Recent findings show the Tamil language had shown no signs of discrimination in religion and caste. Everyone prayed the sun, the moon, water, their soil, fire, sky, trees, and snakes.

Tamils saw divinity in Nature first and human beings who lived a life of selflessness, humility, and the kings and queens who had the characteristics of gods and goddesses. Later, statues, idols, and carvings gave shape to their masters and beautiful souls. But in what ways these are relevant to Tamil being the oldest in the world? There was Sumerian that dates back to 3500 BC and Egyptian Hieroglyphics dating back to 3300 BC, but the radius those languages covered were no match to that of Tamil, the masters of the seas.

From Africa to Australia – The Magic of Tamil

Tamil united this world through trade and other maritime activities. This vast land, sometimes called Lemuria or Mu of the eastern side of the world, had influenced the continent of Oceania containing New Zealand and Australia, and Africa comprising many countries with Tamil Names. Ancient Tamil texts emblazoned bell found in New Zealand belongs to the last Pandyan era who were well adept in trading with different parts of the world, even Rome and Greece. Likewise, the aborigines or original people of Australia called their mom as “Aayi”, “Angya”, and “Aatha” which are still popularly used Tamil dialects in the rural parts of Tamil Nadu. While New Zealand has the Mauri people of Tamil origin, Australia has many Tamil names which include “Madurai”.

Similarly, there are many places in China called China Pandian, which refers to the Pandyan Kingdom of Madurai. Most of the Koreans call their mother as “Amma” and Father as “Appa” even today, which is how Dravidians mostly call their parents. “Dravidam” is “Thiravu” (Seashore) + “Idam” (Land) which means land covered by the seashore. The peninsular landscape of India is due to the geographical arrangement of the Southern states or Dravidian states.

The Distorted Dialects of Tamil in Africa

Still many might be sceptical in accepting Tamil as the oldest language even in practice. These Tamil names in different parts of the world will lead them one step closer to the truth. African countries have the answer for it all. Mainly, Cameroonians are helpful in telling the world the widespread reach of the world’s first trading language, Tamil. Cameroon is the blend of “Kaaman” (Love) + “Oor” (Country or City) – The City of Love. Later, the prefixing letters got altered after the Portuguese traders came and named the country after the aphrodisiac shrimp they consumed.

The people of Cameroon speak Tamil, and there is much concrete proof circulating on YouTube as documentaries. Starting from calling ants as Mallu (Black) Kotte (Sting), their mountain as Mandura – Man (Sand) + Thoor (Deposits), dry land as Thara (Land) bara bara (the distorted form of “vara vara” – A category called Irattai Kilavi in Tamil), and called Maize as ‘Solam’ (an exact Tamil word for Maize or corn), to using Tamil dialects such as Angirku (There), Ingirku (here), Athu (that) and Ithu (this), Cameroonians are a living evidence of the World’s First Trading Language, Tamil.

According to Yuva Noah Harari, the author of Sapiens, it is from Africa the world has begun its race and moved further to Australia after honing several hunting skills. The whole world should have spoken one language at that time and Tamil being the global trading language connected the lands, seas and beyond. Another example from a list of African countries that were named after the fundamental Tamil meaning, “heat” – Eritrea (“Eri” means to burn), Congo (“Kangu” means fire), Sudan (“Soodu” means hot), Ethiopia (“Thi” or “Thee” is fire).

The Traces of Tamil in Balochistan, Pakistan

UNESCO has listed the Brahui language as endangered, and those 2.2 million who speak this language are found primarily in Balochistan and some other parts of Iran and Afghanistan. They are the descendants of an ancient Tamil speaking community. Their radius covers the civilization near the Indus River, and the colour of red found in pots, copper vessels, soil, and bricks of Indus Valley Civilization matches with those found in Keeladi Excavation. Saving Brahui language is equal to preserving an essential part of the Tamil language and its distributed population. According to IAS turned researcher Balakrishnan, the use of red colour signifies strength, revolution, courage, kindness, and many open and positive characteristics which is common to both Keeladi Civilization and Indus Valley Civilization.

Part 1 is a prologue to the journey of proving Tamil as the Oldest Language in the World. Before you go, two questions for you –

Have you ever read about the lifestyle of Sea Tortoises?

How is it connected to the women of Tamil Nadu and why it is definite proof of Tamil’s dominance in the trading world?

More about Tamil names in different parts of the world and Tortoises!

If you wish to explore this salubrious and sacred land, check out this interesting cultural itinerary.

6 responses to “TAMIL, the oldest Language and Lap of the world | The Masters of the Oceans – Part 1”