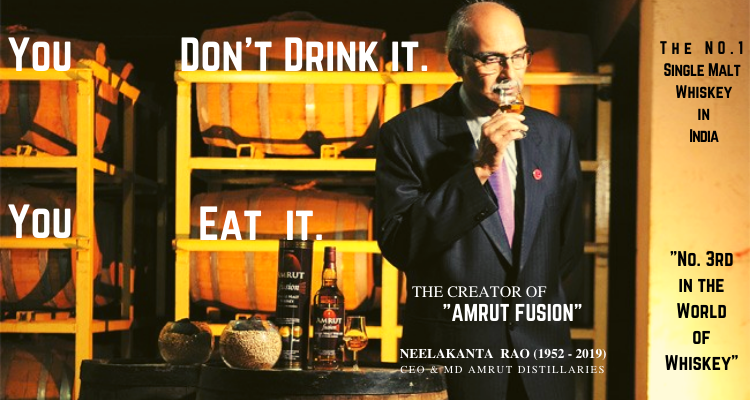 “The Drink of Gods”, Amrut Fusion was given the 3rd place in Jim Murray’s Whiskey Bible in the year 2010. He is one of the legendary Whiskey Critics the world has ever seen and to be credited by the World’s first full-time Whiskey Writer is an incredible feat! Amrut Fusion is one “Elixir of Life.”

Jim Murray rightly gave the spotlight to Amrut Fusion in 2010 before it illuminated the racks of Harrods Whiskey in October 2011. The blind whiskey tasting process of Jim Murray is the epitome of Whiskey tasting. There is no pre-conceived opinion of the public that will affect his assessment. He goes all blind and finds the best kind. He clearly states that Jim Murray’s Whisky Bible intends to stop people from buying bad ones. While talking about Amrut Fusion, Jim says this whisky of India produced can only be a dream of many Scottish Distilleries.

What is Single Malt Whiskey?

A blend of malt whiskies prepared in a single distillery using multiple grains. Blended whisky is made from malt whiskies of different distilleries. The amount of precision and time involved in making a single malt whisky directly impacts the quality of the whisky. So, it is the distillery that decides the fate of a whisky more than the malt itself. And so, single malt whisky is not made of a single grain or single barrel but at a single distillery. Amrut Fusion is one such Indian drink that competes with Scottish, Irish, and Japanese whiskies.

The Success Story of Amrut Fusion

Released in 2009, Amrut Fusion gave a shocking surprise in the global whisky arena by grabbing the 3rd spot in 2010 by Jim Murray. After tasting more than 4000 whiskies, Jim Murray had arrived at this result. This is not an easy thing to accomplish for an eastern country. Whiskey belongs to the West, however, a strong dream and remarkable strategy made the whisky wind to shift direction for a bit. Made from the barleys of the Himalayas and distillery work carried out in Karnataka, Amrut Fusion is the first single malt whiskey in India.

The visionary, Neelkanta Rao Jagdale is the prime person behind this youngest single malt whisky. Whisky connoisseurs would have been amused with the honey-dripping, thick oaked single malt whisky by the dad-son (Neelkata-Rakshit) combo. India was only producing molasses-based whisky before 2004 and it was not even considered as a whisky in the European countries. As the MD and chairman of Amrut Distilleries Limited in Bangalore, the determined son and dad as partners made fortune sing a lullaby to their Amrut baby.

As their Glasgow office rentals and expenses were skyrocketing, Neelkanta Rao Jadgale gave it another shot in Britain. He had learnt the ecstatic art of liquor blending from his father JNR Jagdale, a passionate chemist who found the Amrut Distilleries in 1948. The road to success was not paved easily, it began with sample-tasting in Britain when his son Rakshit was studying MBA in Britain.

A ‘Blind’ Victory for One Incredible Blend

Raskhit had once convinced a pub in Glasgow, Pot Still to allow for blind tasting. Customers who sipped the drink told the whiskey should be more than 15 years old. They couldn’t believe the single malt whisky was from India. Meanwhile, Rakshit’s MBA classmate Chockalingam helped him in conducting blind tasting across Scotland and England, he later became the head of international sales and brand ambassador of Amrut Fusion.

After importing packaging materials and meeting the EU’s Packaging Standard, the dream product was launched in Glasgow, the home of malt whisky and slowly made its staunch mark in the biggies, Spain, Italy, France, and Germany. The laurels of Amrut Fusion started with the Best Natural Cask whiskey in Daily Drams in 2009 by Malt Maniacs.

The original aroma is preserved in oak barrels at a height of 3,000 feet above sea level in Bangalore. There are five variants in Amrut:

There are special editions available too, specific for the European market who are ready to taste something different mentions Rakshit. As the demand for drinking this seductive nectar is increasing, Amrut distilleries have planned to increase the production from 3,60,000 litres to 8,00,000 litres. More than 25 countries import 30,000 cases of Amrut Distilleries which speak volume of this deity’s drink.

It is not easy to hold the aura of Scotland in the outskirts of Bangalore with a single malt whisky. While whiskies of America and Scotland occupy the 1st and 2nd place, it is a sheer shock for the westerns to see a whisky brand from India making it to Jim Murray’s top 3. The authentic treatment toward preserving whisky is what makes Amrut Fusion a sensational hit.

The way Neelkanta Rao Jagdale explains about how to have this divine drink shows his passion and commitment. He closes the snifter as soon as the whisky is poured and asks us to chew the drink. That’s what he recommends – “You don’t Drink it. You Eat this.” Neelkanta passed away on May 19, 2019, to join Dionysius in heaven, leaving his legacy on Earth to remain strong and brisk like his creation, Amrut Fusion.

3 responses to “The First and Best Single Malt Whiskey in India – Amrut Fusion | “Don’t Drink it, Eat it””