TAMIL, the oldest Language and Lap of the world | The Masters of the Oceans – Part 2 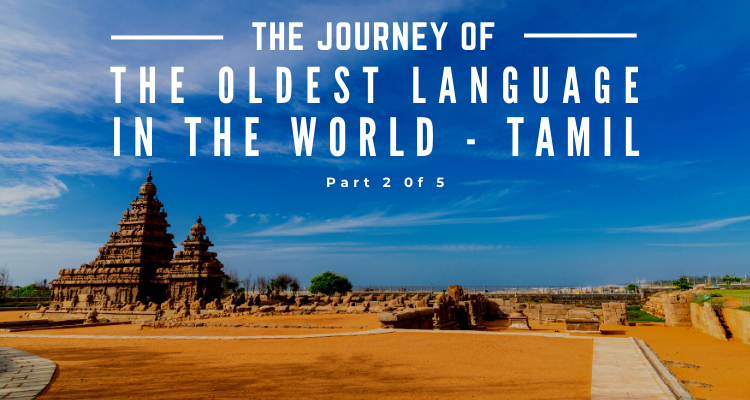 The Dominance of One Land and Language

The omnipresence of Tamil and its cultural traits around the continents of the world were covered in part 1 blog. The credibility level of Tamil being the masters of the oceans in the past should have planted an idea to approach the upcoming piece. From finding Tamil inscriptions inside jars of Egypt, Tamil bells in New Zealand, and traces of Lemuria in a Japanese temple in Tokyo to the movement of homo sapiens toward Oceania, the dominance of Tamil language reverberates in all corners of this planet. This is more than a language and was built on the grounds of humanity participating to the fullest with Nature.

They hunted, they were fierce but also shared a beautiful bond with the world of animals and plants. Tamils observed the wild sea and laid a foundation based on trust and knowledge. So, what are we talking about? What’s so special about watching the sea and getting lost like a hipster in Goa?

The Civilization of Tamil according to the deep-sea researcher, Orissa Balu should have immense gratitude for Sea Turtles. These prolific swimmers were the pioneers in moving the Tamil culture several nautical miles ahead of all those civilizations that existed. The way a sea turtle behaves in the sea laid the basic set up for establishing the trading routes of the yester world. When the world was going around the shores, one set of skilled traders dived, swam, and ruled the sea. Tamils were also called “Thirai Meelargal” (The one who returns from the sea). It takes decades and decades of research and keen observational skills along with elegant teamwork to achieve this feat. It is simple, the land and language of Tamil had more experience than any other land and language in the world.

Scholars and Researchers about the Presence of Tamil

Before swimming with the turtles and analyzing their characteristics, let us discuss the from scholars like Thomas Burrow and M.B. Emeneau who confirms Tamil was spoken in Brahui of Pakistan. In their work, “A Dravidian Etymology” they have shown concrete widespread reach of Tamil in different parts of Iran, Pakistan, and Afghanistan. Mikhail Sergeevich Andronov, a Russian finds out the several links between Tamil and Brahui. He studied in Madras and had a degree in Dravidian languages study. Likewise, Annemarie Verkerk, a linguist expert’s detailed work of Bayesian Phylogenetic Study of the Dravidian Language Family proves the Dravidian Language Family is 4500 years old while Tamil being the oldest of them all.

“Yaadhum Oorae Yaavarum Kelir” – Kaniyan Poongunranar, a Tamil philosopher and visionary of the Sangam Age (He was born in Mahibalanpatti which is close to Keeladi of Sivaganga district). The world is one place and everybody is our family. Although this quote is a beautiful ideology of portraying humanity in the world, there are proofs that Tamils existed everywhere on this planet through their trading capabilities.

The History and Heritage of Tamil Letters and Literature

Remember, Korean kids call their father and mother as “Amma” and “Appa”, Na Kannan, a renowned Tamil researcher explains about this in detail in “The World Tamil Meet” held at Cambodia. During his speech, he mentions the year 48 AD how an Indian girl called Suriratna came to Korea married Kim Suro, a South Korean king and formed the Karak Dynasty. Before her death, she requests her people to call their mother and father as “Amma” and “Appa”. Similarly, the language Hangul of Korea was built keeping the framework of Tamil letters.

Meanwhile, the princess of Korea belonged to Aayi, close to the civilization hotbed of Tamil Nadu, Keeladi. The Five Great Epics of the World were written in Tamil and all five spoke about the importance of trade and communities involved in it. He further extends that “Pallava Grantham” was the first attempt to unify the trading world with one language. While his visit to a library in Berlin, Germany gave him goosebumps as what he saw in the deep basements were Tamil Palm leaf scripts, Thirukural, and Thiruvaai Mozhi, a well-structured hymn that is similar to Samaveda.

More than 60% of the Palm Leaf Scripts speaks about Medicine proving the expertise of Tamils in the field of Medicine. He further recalls about his meeting with India’s former President late Mr APJ Abdul Kalam about Vanasaasthiram (Rocket Technology) in Palm Leaf Scripts written by Bogar, a mysterious and important Siddhar (one amongst the 18 prophets, poets, and philosophers of Tamil). Likewise, the communities of Ya, Yo, and Ye who went to Japan belonged to the Aayi Kudi, one of the villages of Tamil Nadu.

The Connection of Sea Turtles and Tamil

Finding the depths of boundaries of an ocean is as difficult as finding the wholesome legacy of the world’s first trading language. Can you believe the animation film “Finding Nemo” was inspired by the sculptures of Borobudur in Central Java where Tortoise shows the route a lost fish? The routes of tortoises were so significant, it became the sea trading route of Tamil merchants. Not only traders and businessmen but women of Tamil Nadu and some parts of Southern India still follow the golden rule of Sea Turtles. A pregnant woman returns to her mother’s home to give birth to her child which is the replica of Turtles hatching eggs in seashores of Tamil Nadu beaches. They return in millions to their home; motherland for hatching eggs swimming miles away from their inhabited spaces.

Still, women of Ramanadu district in Tamil Nadu wear mangal sutra (the holy wedding rope tied around a woman’s neck by the bridegroom during the wedding ceremony) with tortoise designs, registering the importance of longevity in their husband’s health. As turtles live longer than most of the animals in the world. The erstwhile South Indian corridors of Madagascar are inhabited by tortoises during their mating season. The suffixes of shore names are mostly “Pattinam” where Sea Turtles continuously come back and forth during mating and egg hatching seasons. All these findings get us to one simple equation, Those who understand the Oceans can Understand Tamil and its history. Ancient seaports like Wadge Bank hidden inside should be researched. A mega excavation starting from Vishakapattinam’s Rishikulaya Beach to Lakshwadeep Islands will unearth the world through Tamil.

Despite all these facts, there will be still doubts and confusions about believing all this turtle and Tamil link. The eastern side of this blue planet is clearly the first highly evolved Homo Sapiens on this planet more than the Neanderthals and Homo Erectus. This cognitively evolved human species although lived less than Neanderthals, developed the ability to observe nature, the celestial patterns on the sky, animals moving around, ocean currents, and possessed a greater sense of direction (The Inscriptions at Sumatra are Proofs). During that period, one language, one land, one humungous pack of people drove the world forward through trade and connected everyone. The Journey of TAMIL will continue to amaze in the next part.

As tortoises and evidence dominated this cop, Part 3 will be about country names that have the influence of Tamil in it. Digging continues…

You have any other shreds of evidence with you to share with us? We’ll be glad to use that in the upcoming blog. Keep reading and show us your support. Thank you, avid readers.

If you wish to explore this salubrious and sacred land, check out this interesting cultural itinerary.

5 responses to “TAMIL, the oldest Language and Lap of the world | The Masters of the Oceans – Part 2”