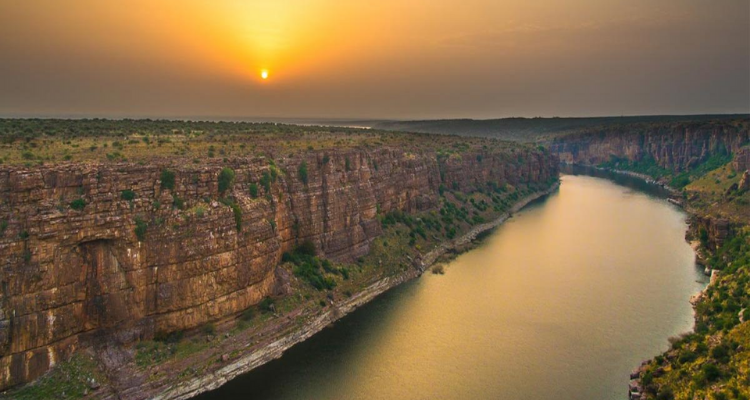 Being on the least visited states in South India when compared to Tamil Nadu, Kerala, and Karnataka, Andhra Pradesh is one of the underrated travel destinations in India. As early as 300 BC, the people of this region were referred to as Andhras. The Satavahana Dynasty ruled the region from 2nd century BC to 2nd century AD. They were ardent followers of Buddhism. Afterwards, the reign of Pallavas, Chalukyas, and Cholas began. Kakatiya Rulers of Warangal faced constant threats from Islamic rulers. After the great fall of Hampi, Vijayanagara Empires shifted the capital to Chandragiri near Tirupati. After all the Islamic and British turmoils, Andhra Pradesh was created in 1956. From vast stretch of rugged lands, spicy-hot cuisines, coruscating caves, and countless places of worship, here are your 10 reasons to visit Andhra Pradesh.

#1 Vishakhapatnam – The Perfect Blend of Heritage and Culture

From ancients and pilgrimage sites, shopping destinations, and unpolluted beaches, the east coast of Andhra Pradesh, Vizag is one of the must visit cities in India. Arakku Valley, an offbeat and less explored hill station is one of the major attractions in Vishakhapatnam. Likewise, INS Kurusura Submarine Museum is the only museum in India to function inside a real submarine. En route Borra Caves, dissolve your worries in the mystical Katki Waterfalls, visit Simhachalam Temple to garner the powerful vibes of Lord Narasimha, the rarest incarnation of Lord Vishnu. Get to Kambalakonda Wildlife Sanctuary to see endangered species in close proximity. For refreshment and relaxation, visit Rishikonda Beach and for prayers, climb up Ross Hill Church to witness the vistas of Vizag.

10 Reasons Why Kochi Should be your Next Travel Destination

#2 Gandikota – The Grand Canyon of India

Dissected by the silently ravaging rivers, Gandikota in Kadapa is a less explored destination to travel with your family and friends. As the home of powerful dynasties, Gandikota gorge was found by Kakatiya Raja in the year 1123 AD who was working for the erstwhile Chalukya ruler. The meaning of Gandikota is Canyon Fort. Jammalamadugu is the nearest railway station to Gandikota. Raghunatha Swamy Temples, Madhavaraya Swamy and Jamia Masjid although in ruins will ensure your sojourn at Gandikota is worth the visit.

#3 Tirupati Temple – The 2nd Richest Temple in the World

Frequented by celebrities and known for its Laddoos, Tirupati Temple is where most of the South Indians Vaishnava families would want to go after the great survival of 2020. Being the linchpin of the Hindu mythologies, Shree Venkateshwara Swami or Tirupati Balaji Temple is the most famous and ample donations receiving temple in India. Known as Bhuloka Vaikuntam or the abode of Vishnu on Earth, Tirumala Temple is not just a spiritual paradise but also a feast for nature lovers. The many mythologies connecting Tirumala elevate this temple’s mythological importance too. The temple’s construction had started as early as 300 AD with notable contributions from affluent rulers and kingdoms.

#4 Lepakshi Temple – The Temple of Giants

Belum Caves snuggled in the Kurnool district of Andhra Pradesh is the second-longest caves in India after the Krem Liat Prah in Meghalaya. The visually appealing stalactite and stalagmite formations here attract thousands of tourists. Over a time of millions of years, the fervent formation of limestone has earned the quality to become one of the protected monuments of India. Vessels of Jain and Buddhist monks belonging to the 4500 BC confirms the site as an important meditation spot for the Buddhist Monks. Although the place was well known to the local population, the place got international recognition only after the exploration of the caves by the German Herbert Daniel Gabauer in 1982.

#6 Kalahasti Temple – Divinity is in the Air

It is one amongst the Pancha Bhoota Temples in India. Pancha Bhootas refer to the five basic elements of life namely Air, Water, Fire, Earth and Sky. The Kalahasti temple in Andhra Pradesh represents the Air element. It is also famous for the Rahu Ketu Pooja which is believed to remove any kind of Sarpa Dosha or obstacles one faces in a person’s life. As you walk past inhaling the spiritual fragrance of camphor and sounds of divine bells, notice the Dravidian architecture of this 1500 years old temple. Kalahasti Temple remains open during Solar and Lunar eclipse which is a rare scenario considering the spiritual rules of the Indian Temples.

Nearby Vishakapatnam, Borra Caves is yet another natural splendour to explore in Andhra Pradesh. Located at 92 km from Vizag, Borra caves are a prominent attraction in Andhra Pradesh. This cave is 100 meters wide and 75 meters high. Sprawling across an area of one square km, these caves serve as the best spot for a weekend getaway. These caves are the origin of River Gosthani. This enchanting cave is discovered by a British geologist William King in the year 1807. It is nearby Araku valley and so easily accessible from Vizag.

#8 Vijayawada – The Cultural Capital of Andhra

The second-largest city in Andhra Pradesh is a place of plenty of layers. If history hangs in one corner, modernity unfurls from another in the culture-rich town of Vijayawada. Explore the Gupta architecture in the Undavalli Caves, become a short-term researcher in the 1500 years old Mogalarajapuram Caves, see for yourself the splendour of Prakasam Barrage that connects Krishna and Guntur, and take your kids to Bhavai Islands – a beautiful picnic spot destination in Andhra. Experience the aura of Medieval Vijayawada in Kondapalli Fort, and pray in Kanaka Durga Temple of Goddess Durga famous for Dussehra festival celebrations. Apart from Hindu Temples, Vijayawada is famous Hazratbal Mosque and Hinkar Thirtha Jain Temple.

There isn’t a kitchen that is spicier than Andhra – The abode of the spiciest foods in the world. A definite connection with the hot kitchens of Mexico. The spiciest cuisine in India is heavy on red chillies and chilli powders as it has been a treasure of Indian trades since the 16th century. Try Kandhi Podi made of split Bengal gram, red gram, and roasted gram and taste it with a dollop of ghee and piping hot rice. Likewise, Gongura Pachadi, Ulava Charu, the remarkable dosa-variant Pesarattu, spinach and protein-rich Akura Pappu, and the most popular dish of Andhra Gongura Mamsam are some of the must-try foods in Andhra Pradesh.

Mantralayam hosts the Moola Brindavanam of Sri Guru Raghavendra Swamy, one of the highly revered and influential saints in Hinduism. Believed to be the reincarnation of Prahalad, Guru Raghavendra is found on Mantralayam hamle on the southern banks of Tungabhadra River. Just 250 km away from Hyderabad, Mantralayam is a must-visit destination for Vaishnava followers.

Srisailam is famous for Mallikarjuna Swamy Temple located on Nallamala Hills. Dedicated to Lord Shiva, it is one of the 12 Jyotirlinga Temples in India. The lingam here is safeguarded by three large cobras. It is visited by a large number of devotees during Maha Shivaratri. Likewise, Patala Ganga in Srisailam is famous for its healing properties, as people with skin disorders bathe in this backwaters of Krishna River. There is also Ropeway Car Ride available in this destination.