The art of Kolam making: Feast your eyes on the vibrant colors of South India 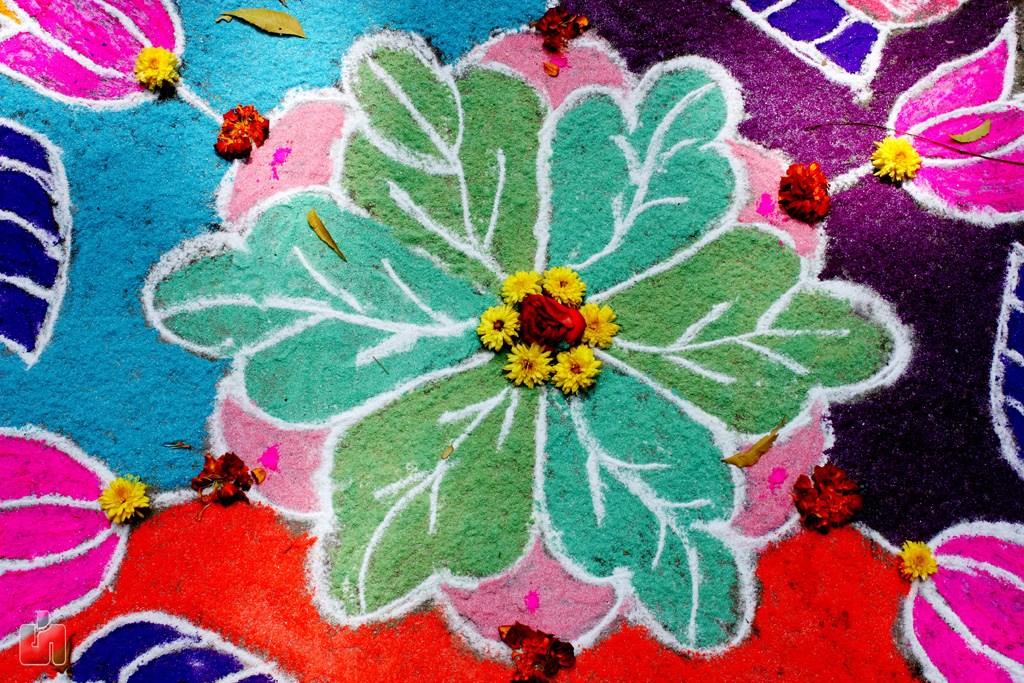 An early morning walk through the ever blissful city of Madurai, I stumbled upon a group of women painting or perhaps it seemed like they were sprinkling white powder onto the floor. They all looked so enthusiastic and energetic so early in the morning, neatly dressed up with “jasmine” flowers tied to their hair. As I got near them to have a better look at what they were up to, I found beautiful patterns drawn on the floor. The first thing that signalled my brain by a mere look at those designs were the Mandalas, the ancient Hindu symbol which represents the whole universe.

If you have ever been to India, chances are high that you might have come across these colourful patterns at some point, drawn outside the households. Ever wondered why these women do this very act every day so early in the morning? Well! I did wonder. That is how I decided to do some local research on it as well. I came to know it is an age old customary practice of the Indians.

The history of Kolams or the Rangolis dates back to the Pre-Aryan period, around 5000 years ago, when it was a requisite practice in the daily lives of the Vedic people. With time, this morning ritual became rare and at present, it is found only in certain parts of North India and pre dominantly in South India. This art form is known by various names in various parts of the country, Kolams in Tamil Nadu, Muggu in Andhra Pradesh, Rangoli in the Northern states of India to name a few. Tamil Nadu is where people still follow this colourful tradition without flaws and with much love.

An interesting fact I found about the Kolams is, during the Vedic period, people started this practice in order to serve as food for the insects, ants and birds. Vedic people believed in universal harmony and these Kolams symbolise the Vedic thought of we humans living along in peace with all the other creatures on the planet. This is a fascinating aspect that excites me about these art works.

Kolams are typically drawn out by Indian women every day. Every morning before sunrise, women wake up, bath, dress up and start their day with a well-drawn Kolam in front of the house. This is how women here showcase their artistic skills, by working out various intricate designs on the floor. Some people even compete with each other on who does the better designs. The art of Kolam making is considered holy as per the Hindu tradition. These patterns are drawn in front of the households, using rice powder or rice paste mixed with water. These days, people mix up artificial colours as well. Women with children are only allowed to draw Kolams. Widows are not allowed whereas kids may help their mums.

People consider the art of Kolam making as a good luck charm, a symbol of prosperity, wealth and peace within the family. Kolam is believed to be an invitation to Goddess Lakshmi to visit their houses, bless them and keep away all the negative vibrations. In other ways, it seems a good morning exercise as well, for the ladies, to energise themselves ready for the whole day.

Do try an early morning stroll through the streets of South India and feast your eyes on some of these vibrant art works of Indian women. It is no less than delightful to watch.

4 responses to “The art of Kolam making: Feast your eyes on the vibrant colors of South India”