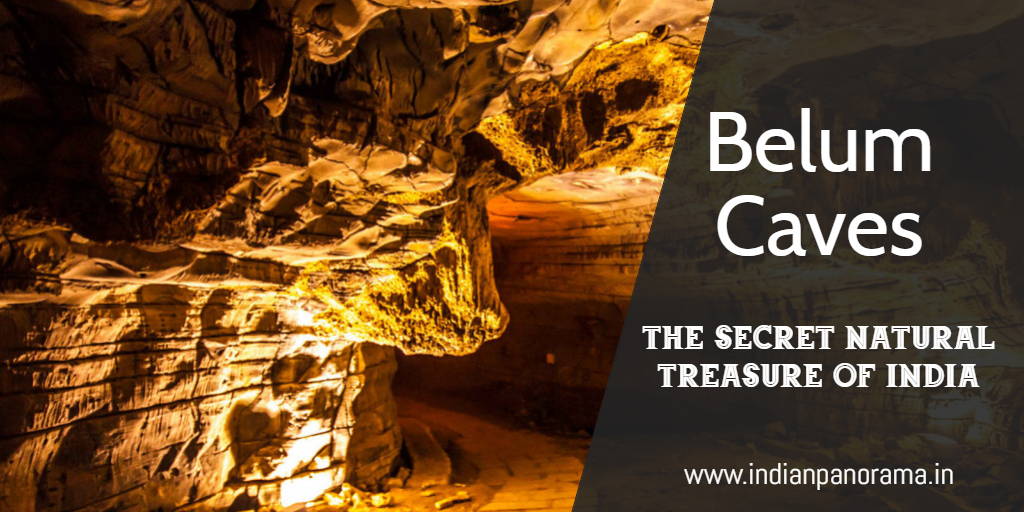 Belum Caves snuggled in the Kurnool district of Andhra Pradesh is the second-longest caves in India after the Krem Liat Prah in Meghalaya. The visually appealing stalactite and stalagmite formations here attract thousands of tourists. Over a time of millions of years, the fervent formation of limestone has earned the quality to become one of the protected monuments of India.

A gorgeous treasure amongst the hot and humid nature of Andhra Pradesh. The three and a half kilometer cave is accessible only up to one and a half kilometer for tourists. Sinkholes, vast passageways, colonnades, enormous fissures with freshwater and water tunnels naturally decorate these caves. The forty feet tall Buddha statue is the proof of the existence of monks inside the caves long back.

The history of this cave is fascinating with delectable folklores and facts. It was believed to be the residence of a caveman or troglodyte in the ancient period. But vessels of Jain and Buddhist monks belonging to the 4500 BC confirms the site as an important meditation spot for the Buddhist Monks. Although the place was well known to the local population, the place got international recognition only after the exploration of the caves by the German Herbert Daniel Gabauer in 1982.

In the year 1988, the state government heralded the place as a protected monument. Around 2002, this became a potent location for the travelers and geologists. The initial discovery happened due to the efforts of the British Archaeologist and Geologist, Robert Bruce Foote in 1884.

This unusually structured labyrinth cave is made up of black limestones with numerous mazes and a valorous entrance chamber. Unscathed by human presence, the abnormal surfaces inside the rocks make it difficult for photographers to capture the raw beauty. The water from the Chithravati River had consistently eroded the limestone rocks forming a voluminous cave. Andhra Pradesh Tourism Development Corporation (APTDC) is responsible for promoting tourism here. The word “Bilum” in Sanskrit means Hole in English. Here are eight beautiful things to witness in Belum Caves for a perfect experiential trip.

The 40-feet Buddha Statue built by the APTDC in front of the caves marking the past of the highly revered monks involved in meditation before. There are some sacred Jain relics too inside the caves.

Gebauer Hall, a part of the entrance here with limited air supply is named after the famous explorer of this cave – Daniel Gebauer, a German Speleologist. A place to visit for the adventure seekers and geology lovers.

Natural Art resembling the hoods of thousands of Cobras, a lion head-shaped entrance called “Simhadwaram”, the “Kotilingalu” Chamber, which is another stalactite formation, and “Voodalamaari” (shaped like a banyan tree) structures are notable attractions.

Another natural geological phenomenon due to the movement of Subterranean water has created three amazing Sink Holes. A feast for the Geologists and Geography loving kids.

Those who want to train their knuckles hitting hard surfaces are welcome to “The Chamber of Seven Notes” (Saptasvarala Guha). Hit these magical rocks and hear musical notes popping out just like Darasuram’s Airavateshwara Temple’s Musical Steps. One can use bamboo sticks too for a quick orchestral performance.

Get to the lowest point in the caves which is 150 feet below sea level. The place has a perennial underground stream with a natural waterfall called “Patalganga” which starts at one point and ends mysteriously on another point deep inside of Earth. One can call it a dark and mysterious swimming pool.

As an erstwhile Meditation Abode, Belum Caves contains many Buddhist and Jain religious relics. They have meditated in the zig-zag paths of the caves and as a form of tribute, less than 90 km away in Anantapur there is a museum displaying the remnants excavated from here.

The naturally formed Graystone Recliner in the Dhyana Mandir (Meditation Hall) was once used by the monks to rest after their ancient practices. A stone bed for the Yogic population who can rest anywhere.

Apart from these wonders inside, visit the Yaganti Cave Temple, which is 44 km away, the wide-angle lens friendly spot – Gnadikota Canyons which is 60 km away, and the sacred Mantralayam which is 186 km away on the banks of the Tungabhadra River, outside of the caves.

December to February is the best time to visit Kurnool district. Since exploring the caves in hot and humid conditions is not a comfortable option. During the monsoon season, heavy showers are expected and so it is suited for the adventure-loving population. Although in Andhra, Kurnool is blessed with rain more than any other state. The temperature ranges from 20 to 28 degrees Celsius during winter (October-February). The place looks utterly different during the rainy (June-September) season. Summer (March-May) temperature ranges from 30 to 40 degrees Celsius.

Air: The nearest airport to Kurnool is in Hyderabad. Rajiv Gandhi International Airport is less than 200 km away from Kurnool. From there, Belum Caves is just under 115 km.

Bus: The Kurnool bus stand is 111 km away from Belum Caves. Buses and local transport options are available from nearby cities to major cities too.

Rail: The Kurnool Railway Station is less than 110 km from Caves. Hire a Taxi or travel by bus to reach this protected monument site.

A paradise for the explorers of “dark secrets”, young kids fascinated about the mysteries of the world and geographical wonders, and expert geologists marking their way into the field. A spot to unearth remarkable ideas and a must-visit place during any monsoon or winter weekend.

2 responses to “Belum Caves – The Secret Natural Treasure of India”