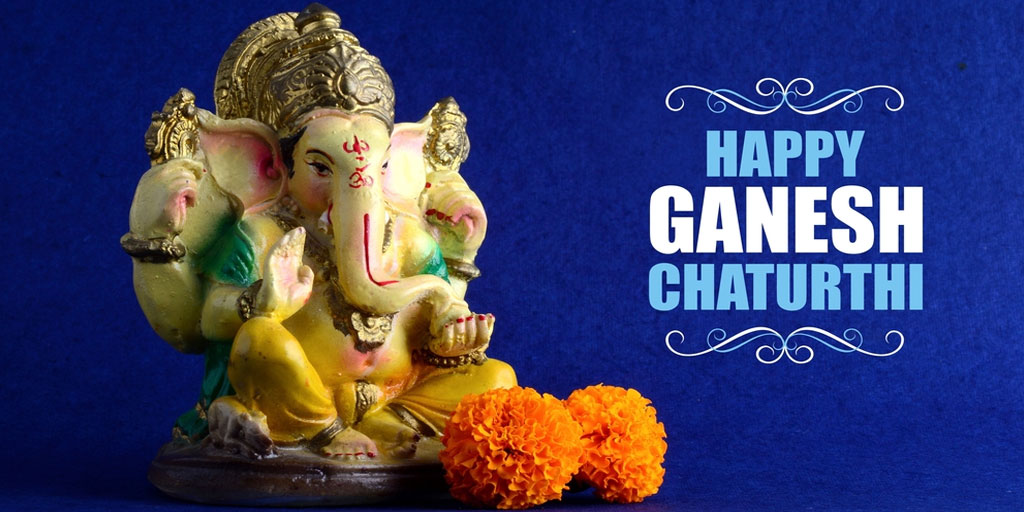 Ganesh Chaturthi is celebrated with great devotion throughout India to honour the birth of Lord Ganesha, the god of wisdom, prosperity and good fortune. It is also popular as Ganesh Utasav. This 10 days long vibrant festival is celebrated on Shukla Chaturthi of the Hindu month of Bhadra that generally falls between the months of August and September. And the celebrations continue till Anant Chaturdashi day. This year the Ganesh Chaturthi begins on September 2, 2019 and ends on September 12, 2019.

Lord Ganesha, the beloved elephant-headed god of Hindus, is the son of Lord Shiva and Goddess Parvathi and is worshipped as the God of new beginnings and remover of hurdles.

It is believed that Ganesha was created by Lord Shiva and Parvathi on the request of the Devas, to be a Vighnaharta (obstacle-remover) to help the Devas and a vighnakartaa (obstacle-creator) in the path of rakshasas (demons).

Lord Ganesha is known by 108 names like Bal Ganesh, Lalbaugchya Raja, Siddhivinayak Maharaj, Dhagru Sheth etc. Lord Ganesha is easily recognized among the millions of Hindu Gods and Goddess because of his elephant-head, huge ears, characteristic pot belly, one broken tusk, and four hands holding a pasam, goad, laddus and a pot of rice.

How is Ganesh Chaturthi Celebrated?

On this auspicious occasion of Ganesh Chaturthi, huge elaborately decorated idols of Lord Ganesha is installed on a pedestal that symbolizes a throne, either at home or in a public place and people worships the idol with a Pranapratishhtha puja which is followed by (Sanskrit: shhodashopachara) pooja, the 16 ways of worshipping the Lord. There will be chanting of Vedic hymns from religious texts like Ganesh Upanishads. Meanwhile, the idols are anointed with red sandalwood paste.

Lord Ganesha is then offered flowers, coconut, jaggery and his favourite modaks (sweet dumplings). The modaks are then distributed as prasad during the festival. Other sweet dishes like Laddu, barfi, pedha, and Sundal are also distributed during this time. Also, people avoid looking at the moon on the first night of the festival because it is considered a bad omen as it creates Mithya Dosham or false accusation of stealing something.

On the final day, that is on Ananta Chaturdashi, the idols are taken out in procession through the streets, accompanied by people chanting bhajans, shlokas, drumbeats, dancing and distributing flowers and prasad. And then the idol is immersed in the ocean or other water bodies and this ritual is known as ‘Ganesh Visarjan‘. People perform this ritual and thank Lord Ganesha for visiting their home and blessing them as well as removing obstacles from their path.

When Ganesh Chaturthi Festival is Celebrate?

Ganesh Chaturthi is usually observed on the 4th day after the new moon in August or September. It is celebrated for a period of 11 days. The celebration ends on 12th day which is called as Ananta Chaturdasi.

This year Ganesh Chaturthi will begin on 2 September, Monday and end on 12 September, Thursday.

Ganesh Chaturthi, the spectacular festival which commemorates the birth of Lord Ganesh, is one of the most popular festivals in India. Lord Ganesha is known to be ‘Vighnaharta’, the lord who takes all your pains away. He is worshipped for his ability to remove obstacles and bring good fortune in life.

The main attraction of Ganesh Chaturthi is the richly and beautifully decorated Ganesha idols. Every street and home will be adorned with Ganesha idols during this festival. You could see smaller sized idols of Ganesha to very large and gigantic ones.

Traditionally, these Ganesha idols were made of clay. Later, people began making them with thermocol(Polystyrene), plastic decorations and even Plaster of Paris, as well as toxic and non-biodegradable chemical colours were used and the immersion of these idols in water bodies results in enormous harm to the environment and also destroys the flora and fauna of the water bodies.

As an initiative to protect the environment and to avoid pollution,  people started using idols made of clay as well as that are both innovative and eco-friendly. Now there is a huge demand for these eco-friendly Ganesha idols.

Check out some of the innovative and recyclable Ganesha idols that are eco-friendly too:

As of September approaches, bringing with it Ganesh Chaturthi, one of Maharashtra’s biggest festivals, 85-year-old artist Pandurang Hazare and three successive generations of his family have been busy making the all-clay idols they’ve come to be known for at their workshop in Pen, Raigad district, Maharashtra. Unlike many pieces available in the market, the Hazare workshop has proudly maintained a tradition of not using any Plaster of Paris or toxic colors in its product ever since the business began with Hazare’s father over 70 years ago.

Eighty-five-year-old sculptor Panurang Hazare has been making clay idols at this family workshop in the town of Pen, Raigad district, Maharashtra for the last 70 years. With less than a month to go for Ganesh Chaturthi, civic authorities are focusing on implementing a ban on the plaster of Paris(PoP) idols. But for Hazare, idols that don’t pollute have been a priority from the get-go.

Why Ganesha Idols Are Immersed In Water On The Final Day?

The ritual ‘Ganesh Visarjan’ or the immersion of Ganesha idol in water symbolizes Lord Ganesha’s journey back to Mount Kailas—the heavenly abode of his parents, Lord Shiva and Parvati, after staying with his devotees for 10 days. It also indicates the fact that everything formed on Earth finally joins with one or more of the elements of nature.

Ganesh Chaturthi is celebrated all across India with great zeal and enthusiasm. But the grandeur of this festival can be witnessed in the state of Maharashtra where Lord Ganesh is regarded as their patron saint.

One of the best places to witness Ganesh Chaturthi with all its splendour is Mumbai, the capital city of Maharashtra. Over 6000 idols are commissioned every year in Mumbai to celebrate this festival. You can see around 10,000 statues of Lord Ganesh displayed at various parts of the city during the festival.

The place is famous for its massive procession on the final day of Ganesh Chaturthi which involves the participation of millions of people accompanying the idol along with music, dance, and chanting ‘Ganapati Bappa Morya’ (slogan praising Lord Ganesha) to immerse the idols in water. And it is a wonderful spectacle to watch. Visit Siddhivinayak temple in Mumbai, dedicated to Lord Ganesha during Ganesh Chaturthi for a unique experience of this festival.

The celebrations of Ganesh Chaturthi are at its peak in Ganpatipule, situated in Ratnagiri district on the Konkan coast of Maharashtra. The Swayambhu Ganapathi Temple of Ganpatipule is famous for its unique idol of Lord Ganapati. There will be vibrant celebrations, prayers and feasting during Ganesh Chaturthi which include the participation of a large number of villagers and pilgrims.

You can also be a part of the magnificent celebrations of Ganesh Chaturthi at Hyderabad, the capital city of Andhra Pradesh. Khairtabad hosts one of the biggest Ganesh idols in the country which is 60 feet high. Another fascinating thing is the laddu that weighs 5600 Kg, placed on the left hand of the deity during the festivity. Balapur, Kamalanagar Chaitanyapuri, Durgam Cheruvu, Old City (Gowlipura) and New Nagole are some of the best places in Hyderabad where you can enjoy a memorable Ganesh Chathurthi.

People of Goa also celebrate Ganesh Chathurthi with great fervor. It is a wonderful time of reunification of families and friends. During the festival time, beautifully decorated idols of Lord Ganesha in different shapes and sizes are installed in different parts of Goa by various merchant associations which is an amazing sight to behold. Temples at Ganeshpuri and Khandola and villages like Marcela celebrate this festival grandly. A lot of tourists flocks to Goa to witness this spectacular festival.

Kanipakam is located in Chittoor district of Andhra Pradesh which is famous for the Varasiddhi Vinayaka Temple (Kanipakam Temple) that houses a beautiful self-manifestation idol of Lord Ganesha that grows in size. The Kanipakam Temple hosts a 21 days long annual Brahmotsavam Festival that starts from Ganesh Chathurthi day. On these days, the processional deity of Lord Ganesha will be taken in a procession on different Vahanas across the surrounding villages. It also offers a memorable experience of Ganesh Chathurthi festival.

Are you interested in scaling temples of India? Choose the pilgrimage tour packages of Indian Panorama.

Things To Do During Ganesh Chaturthi Festival:

On this Ganesh Chathurthi, may Lord Ganesha showers his blessings upon you with success, good health, good fortune, wealth and prosperity.

On this special occasion, we offer customized festival tour packages for you to experience the spectacular and vibrant Ganesh Chathurthi in various parts of the country. Other states like Madhya Pradesh, Gujarat, Karnataka, Kerala, Tamil Nadu, Telangana, West Bengal and eastern states of Odisha also celebrate Ganesh Chathurthi. Lord Ganesha is also worshipped in other countries like Indonesia, Thailand, Afghanistan, Cambodia, Nepal and China.

For more religious activities, take our exclusive customized festival tour packages with Indian Panorama covering Delhi, Jaipur, Agra, Mathura, Kosi, Haridwar and Rishikesh, Kerala, Karnataka and Tamilnadu. Are you visiting India for Ganesh Chaturthi? You are in for a treat. India is at its prime beauty during the month of September.

One response to “Ganesh Chaturthi Festival 2019”