Here are the best places to Visit in Calcutta 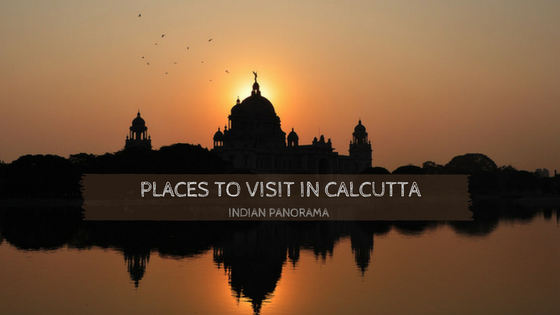 Calcutta or Kolkata as we know it is the city known for keeping its historical significance intact. Right from the old transportation modes to the Colonial Buildings that serve as houses or offices till date, we can find Calcutta in its real charm. The city, often called “the city of joy” is well known to its people and visitors as “the city with the soul”. It not only attracts people with its history, rather holds up different qualities for people with different likings. Hence, while jotting down the places to visit in Calcutta, we could categorize it according to the varied interests.

Despite the modernization in some of the areas, Kolkata continues to remain Calcutta, with its monuments and buildings as the treasure of history. Some of the places that one should not miss are: 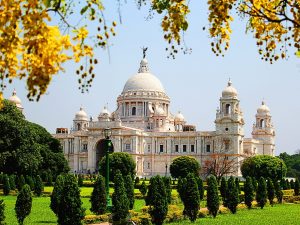 The landmark of Calcutta and one of the must- visits of the city is Victoria Memorial, a large marble palace built as a memorial for Queen Victoria, who held crown when the monument was built. The irony remains that the palace which is visited by everyone was never visited by the Queen for whom it’s dedicated. Yet, the ambience of the gigantic palace showcases the Royal aura through its architecture and gardens.

Get a visual experience of the colonial era through the light and sound show called Son-et-Lumiere. The show remains closed from July to September. 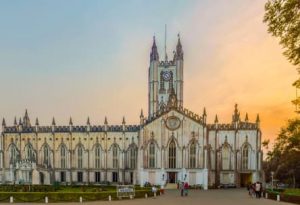 Built in 1847 and noted for its Gothic Architecture is another landmark of Central Calcutta – The St. Paul’s Cathedral. It is the seat of the Diocese of Calcutta and is also the largest cathedral of the city. Though a CNI cathedral, it is visited by Christians from all segments as well as by people of various faiths.

The Gothic architecture has now got an Indo touch to it with the renovation that took place after the 1934 earthquakes. 247 feet in length and 81 feet in width, it stands a marvel of the colonial era and Gothic architecture. Its tower is modeled after “Bell Harry” tower of the Canterbury Cathedral, hence leaving a reminiscence of the rich cultural history from the English. The interiors with several glass paintings, sculptures and memorials are its highlights apart from the grand building itself. It also an ornamental wall with incidents from St. Paul’s life. 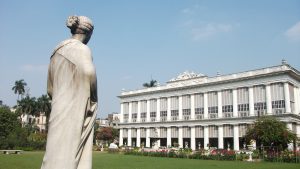 The 1835 mansion built by Raja Rajendra Mullick upholds the rich colonial aura around it. The entrance itself can leave in awe with the grand portico and six huge Tuscan columns that speak of the architecture.  The beautiful garden with elaborate fountains could take us to the world of Zamindars and Maharajas. To add to its aristocracy is the personal zoo within the premises. A part of the house still remains inaccessible as it is still inhabited by the heirs.

The eccentric Palace looks richer inside with several sculptures that remind us of the British Raj. Right from a larger than life statue of Queen Victoria, carved out of a single tree to the huge Belgium Glass mirrors in “Jalsha Ghar” or the music room, and the first piano imported to India are all a part of its rich historical significance. The palace also boasts of its rare collection of 82 clocks.

While its architecture resembles a blend of Bengali and British styles, the paintings show the vast and vivid friendships Raja Rajendra Mullick had, which brought most of these as gifts. Among several works of Western painters like Ruben and Murillo, it also upholds works by the great Indian painter Raja Ravi Varma.

This Marble wonder is accessible only with a special permission from the Tourism Department. It is open to visitors between 10:00 AM to 4:00 PM. Please note  Mondays and Thursdays are closed. 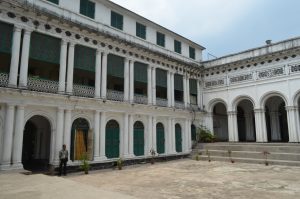 Once the abode of the great Indian Poet Laureate and Noble Prize Winner Shri Rabindra Nath Tagore, the Jorashonkha Thakur Bari or the Tagore’s House is a must visit for students of Literature. Built in 1785, it also remains as an example of an ancestral Bengali house of the higher class in the olden days.

Today it has been converted into a Museum that has several buildings with rooms that have all the antiques preserved. Right from the place where the Great Bard was born to where he breathed his last is found in this house which makes it special. It also has around forty of his paintings that have been preserved. His reading room which has his chair, pens and books with his hand- writings gives goose bumps to literature lovers.

The Museum also serves as the right place to learn more about the popular Bengal Renaissance in which the Tagore family played a crucial role. It is visited by students and researchers who get to learn history in the exact location.

Places of science and Arts 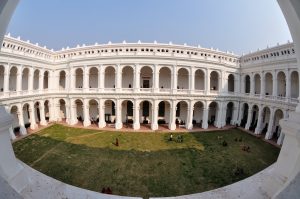 The ninth oldest museum of the world and known for its varied collection is the “Indian Museum” of Calcutta. It is locally called the “Jadughar” or the magic house. The gigantic white mansion has several sections and floors dedicated to displays of Anthropology, Art, Geology, Archeology, Zoology and Industry. It stands as one of the best places to visit in Calcutta and hence, pulls local as well as tourist crowd round the year.

The Art Sections is a great learning experience on India, as it displays textiles, lifestyle, and traditions of different states of the country. The Archeological section on the other hand displays objects and paintings from the Stone Age to the Colonial Period. However, the major highlight is the Egyptian Mummy that has been kept in a separate room. 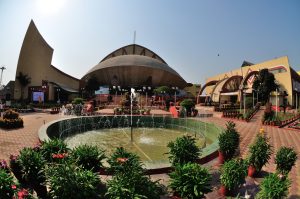 Started in 1997 and developed by the National Council of Science Museum, Science City is one of its kinds in the whole country. The Park is divided into various sections like ‘Dynamotion’, ‘Maritime Centre’, ‘Space Centre’, ‘Evolution Theme Park’ and ‘Science Park’ which becomes a good learning experience for children. Some of the unique attractions here are the ‘Butterfly Enclave’ where you get to see varieties of live butterflies moving around the plants.

Also try some fun and science experiments like walking on a floor piano to create your own music, floating soap bubble in air, peeping into an infinite well and more.

Hence, it is both enjoyable and educational and serves for people of all ages. Also the gardens and small cafes within the premises make it a good way to take breaks from the different sections of the park. The Park also offers a ropeway service connecting the two ends of it. 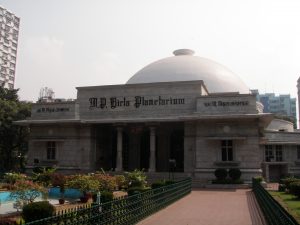 Birla Planetarium is another interesting place which is also easily accessible as it’s in the centre of town. Constructed in 1962, it is an audio visual display of the Universe and its intricate designing of the Solar System, Galaxies and the life cycles of stars. It is the first Planetarium to be set in the country. It also has a gallery consisting of portraits of famous astronauts and celestial bodies. The architecture of the Planetarium is modeled after the famous Sanchi Stupa in its dome shaped building which looks good as well.

With all the sightseeing places on one hand, the city itself becomes a major attraction with all the life in it. The markets, street food stalls, localities and the colonial era transportation modes combine together to give you a real city tour in Calcutta.

Calcutta boasts of the only tram network in India which is also the oldest electric system of Asia. Started with horse- driven trams in 1873, today it is among the major transportation systems of the city. It is ideal for its historical value as well as a cheap and easy transport for locals. Despite several plans of getting away with the trams, Calcutta could never give up on its mobile heritage and pride that has been functional since 1902.

One of Calcutta’s British heritage and identity is the hand – pulled wooden carts or rickshaws which are very common in different parts of the city. Despite the cycle- rickshaws and auto rickshaws, these have continued to be a mode of transport and also a tradition among many. It is also a means of livelihood for the men who do the tedious task of transporting people and their belongings to places. To them that’s their source of income and to a Calcuttan it’s one of the transportations.

Calcutta is often tagged as the “City with the Soul”. People believe that it has a unique ambience which touches individuals despite the slow paced lifestyle and crowd. To experience the city, the best place to visit is its markets and eateries.

The main hub called the “New Market” is where people from all over the city flocks to for street shopping. Whether its clothes, branded items, accessories or the best local food, you will find it all here.  It changes its color with the season. If during Eid it turns into a display of Mughal cuisines and street food, during Christmas is adorned with Santa masks and Christmas trees, plum cakes and more. The maximum number of footfall is marked during the main festival of Bengal, “Durga Puja”.

Calcutta also boasts of the largest second hand book market of the World, namely College Street. It’s called so because of the several Universities and Colleges that is located there, turning it into an intellectual hotspot. Adding to its ambience is the old “Indian Coffee House” that takes pride in remaining same over the years. Whether it’s the menu, seating arrangement, interiors or the uniform of the waiters, in all ways its remains old school which becomes its USP.

The city also has a different face to show its visitors with “Park Street”, where the night- life of Calcuttans comes alive. Few to name among the night clubs are Roxy and Tantra that stand out as best. The Street is also famous during Christmas Season, when it comes alive with food stalls, light displays all over and dance and music show for around two weeks.

When we talk about the places to visit in Calcutta, a special mention goes for the Festival of Durga Puja mentioned earlier. It’s not just a festival but the event that turns the whole city into a must visit destination. This is the time when we cannot specify a place in Calcutta as every corner of the city displays color, music, tradition, culture and life of its own. The nine days long festival is celebrated around October. Despite being a Hindu Festival, it showcases the secularism of the city when Hindus, Muslims, Christians, Sikhs and people of all other faiths come together to celebrate the festival.

That’s how the City of Joy has unique things to offer the people who come to it. It displays its rich heritage with pride through its people, monuments, museums and the air around the city. Hence, Calcutta remains a unique city among the others in India.