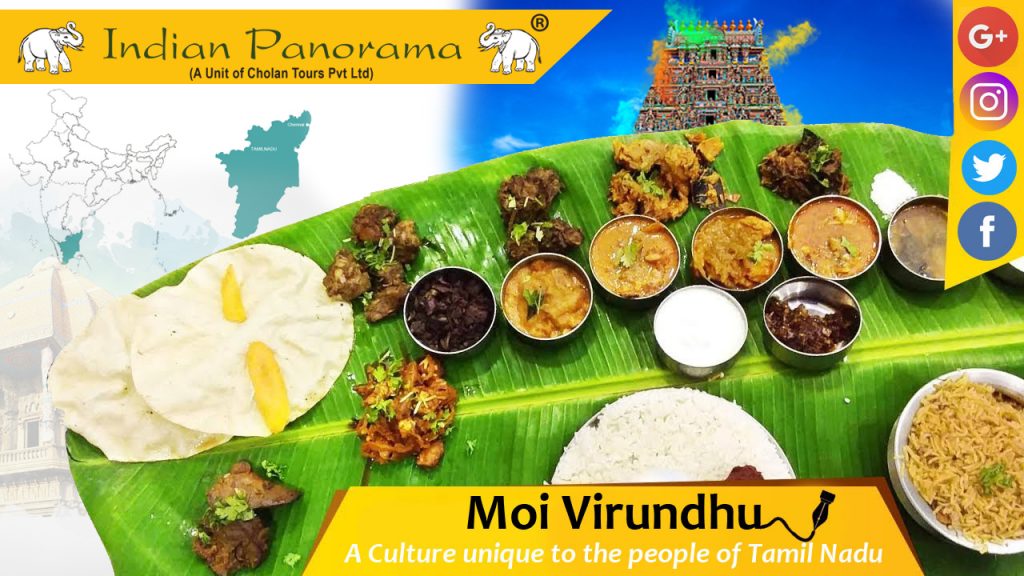 Have you ever heard a term called Moi Virundhu in any part of the country or globe? This is a unique event conducted in the southern districts of Tamil Nadu especially in the villages in and around Tanjore and Pudukottai districts. The culture of offering a feast at a grand scale and raising a huge amount of funds will impress anyone interested in communal harmony and social unity.

Serene Ambiance, sublime beauty, palmyra bordered narrow roads, mud houses, dotted with green pastures, cattle herd, bullock cart and what not. Words are scarce to describe the beauty of Tamilnadu rural areas. Inside of the touch of modernism, still, some rural parts of Tamilnadu cling on to their rich heritage and culture. Make a trip to the amazing rural parts of Tamilnadu and get indulged in their special feast and unique customs.

Incredible Traditions of Tamil people are bonded with meanings and social cause. One such custom is Moi Virunthu, where the needy meets his financial needs without shedding his pride or respect.

In general, during the months of June to August, the fairs and festivals in Tamil culture revolve around the temples and spirituality. Fasting, processions of chariots around the temples, offerings are given to God as a thanksgiving measure to the prayers answered by Him are the regular agenda during these months and no function like marriage or house warming ceremonies or any other family-oriented rituals will take place as these months are considered to be auspicious only for spiritual activities and not for any other functions. And, because of these limitations, the small vendors who used to get benefitted during the other months will not have much inflow of cash during this period. Keeping this and several other factors in mind, the culture of conducting Moi Virundhu came into the picture to help those deserving for timely support.

When was the first Moi Virundhu?

Let us look at the origin of this event or a festival or a feast. During the earlier decades, for any functions like marriages or for any unforeseen events like death or hospitalization occurring in anybody’s house, the neighbors will help those individuals by way of collecting the money among themselves instead of letting them seek help from some unknown third parties. This just helped at the time of dire need and it will be repaid by the borrower without any additional interest. This way, people used to strengthen their bonding among themselves helping each other leading to a prosperous society.

Moi Virundhu has evolved through several transformations over the period, but the bottom line for conducting such a grand feast remains the same, “lending hands to each other to get uplifted” Due to the diversified categories of people living in a region, the reason for conducting the feast has also seen several changes during the years. Still, Moi Virundhu is the single thread connecting everyone breaking the economic, social and communal barriers.

Any procedures for Moi Virundhu?

It will be surprising to know that there are predefined protocols and procedures to conduct this feast and the older codifications are being followed still today without any deviations. Out of all, the first step will be to decide who are all going to be the members offering the feast. During those days, one or two people used to host the feast. But today, due to the exhaustive increase in price and other operating costs, the expenses for the feast is shared by a minimum of 8 to a maximum of 32 people joining together. The feast will be hosted by those who are in crucial need of money to uplift their lifestyles or to get their daughter/son married or to start up some business at a small scale. This unique culture as “We shall eat together, invest together and grow together”, cannot be seen anywhere in this world.

The hosts will arrange to print invitations, rent a marriage hall or land covered with roof thatch to conduct the feast. In everyone’s house in a particular village, there will be a separate notebook called “Moi Note” which contains all the details about the money received and lent. Once the invitation is received, the “Moi Note” will be cross-checked to know about the amount to be repaid. Flex banners will be placed at strategic locations of the village and everyone will get to know about the event.

On the day of the feast, the hosts will be welcoming everyone at the entrance and lead them inside. There will be separate payment counters in the name of every host and people will be sitting there ready to collect the money. Normally, they will be the close relative of the hosts. The attendees of the event will offer the money with the concerned individuals and proceed to the huge dining hall where a delicious non-vegetarian feast awaits them.

Those who already got benefitted by this feast earlier, have to repay it after five years and in addition, they have to pay something extra to create a new line of account and is called as “Pudhu Nadai”. Thus, everyone attending the event will pay something to most or all of the hosts, reassuring their bonding with them with the economic and social liabilities. There is an unwritten rule that the money has to be paid before 12 Noon on the day of Moi Virundhu. Money paid after the deadline is noted under the title “Pin Varavu”, and it is in fact considered as an insult and in most of the cases, people will be keen on paying beforehand.

Will you not be surprised to know that the recent Moi Virundhu feast in the Pudukottai region has mobilized money around 100 crores? Nobody can think of such things to be achieved on a single day and that is the specialty of this feast.

Besides these procedures and protocols, the “Moi Virundhu” culture is giving immense benefits to all. As this “Moi Virundhu” is scheduled almost on every day throughout the regions of Tanjore and Pudukottai lasting for nearly two months, people involved in cooking, flex and invitation printing, decorations, plantain leaves procurement and other logistics are engaged for the entire period, earning well without compromising on their living standards.

Due to the technological enhancements, in recent years, Moi Virundhu is conducted in a high tech fashion. A separate app called “Moi –Tech” is available and people can keep track of their financial transactions and names of beneficiaries using this app. You can even find the ATM machines, currency counting machines deployed with the bank employees engaged for documenting the transactions and giving printed receipts to the donors on the day of Moi Virundhu.

Moi Virundhu, a unique culture of TamilNadu, uniting the people with a common thread and a common cause, Be United, Grow United!

Tamil Nadu is a treasure trove with much more hidden jewels like this, Keep exploring!

Come and explore the rural areas of Tamil Nadu which is rich in tradition, impeccable culture and the way they revere their relations and family. It will surely be a tour of unforgettable memories.

Get ready to relish the rural spirit of Tamilnadu and enjoy your best tour experience in Tamilnadu with Indian Panorama.