Maha Shivaratri 2021 | Why you must Skip Sleep and Sit Straight on this powerful day? 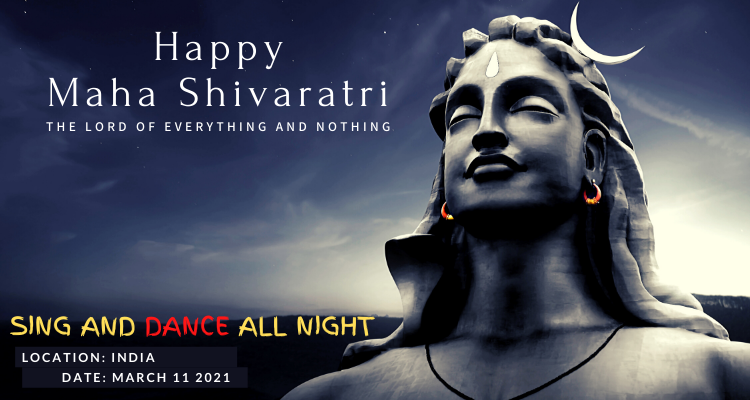 Sleep is vital for good health and is the most essential routine of human existence. However, in India a special day during February and March is spent singing and listening to devotional songs, mythological tales, dancing in total exuberance, or sitting cross-legged in complete tranquillity. People don’t sleep the whole night while they meditate and pray to Lord Shiva, the ruler of Cosmos and beyond to imbibe powerful waves from the Universe. The day is Maha Shivaratri. It is observed in countries like India and Nepal on March 11 2021.

What is the Significance of Maha Shivaratri?

Regarded as the darkest night of the year, Maha Shivaratri is one of the sacred celebration nights of India. Lord Shiva, the lord of everything and nothingness is celebrated throughout the night with folklore, ecstatic dance, and joyful music. Owing to a peculiar planetary arrangement during this time, the Universe emits a form of energy that brings goodness to the human system when the spine is kept erect. The upward surge of energy will help a human being connect in aesthetic and beautiful ways with the cosmos. People can improve their physical and spiritual awakening on the day of Maha Shivaratri.

Out of the 12 Shivaratri that occur on 14th of every Hindu month, the Shivaratri of Magha or Maasi Month (February and March) is the Maha Shivaratri, the most powerful one. A way to open up immense spiritual possibilities and expand human potential.

What do people do during Maha Shivaratri?

Deemed as one of the biggest festivals of Hindu culture, Maha Shivaratri is an auspicious day to celebrate the divine by fasting, offering prasad, performing yoga, doing meditation, and empowering each other through various acts of kindness and love. Unmarried Hindu girls pray Lord Shiva to get a good husband like him as he is considered as an ideal life partner. Ardent devotees offer milk, water, akwan flowers, bhaang, and dhatura to Lord Shiva’s idol and worship the Hindu God of Destruction as mentioned in most of the Hindu texts.

There is a legend stating that Lord Shiva had pacified the fight between Lord Brahma and Lord Vishnu during this day. As Lord Brahma flew to the top of the sky in search of the end, he had come across a Ketaki flower and decided to cheat Lord Shiva. After knowing the intentions of Lord Brahma, angered Lord Shiva ended the dispute between Lord Vishnu and Lord Brahma. That is why Brahma temples are not seen in any part of India other than Pushkar. While some people believe, to celebrate Lord Shiva’s pacifying act, Maha Shivaratri is celebrated.

This day is considered as the wedding day between Goddess Parvathi and Lord Shiva. Together, they are known as Arthanatheeswarar.

Another mythological anecdote is that Lord Shiva saved the world from annihilation. He devoured the poison of milky ocean and it made him turn blue, earning him the name “Neelakandan”.

How to Celebrate Maha Shivaratri?

You can fast the whole day and start listening to devotional numbers from evening till the next day morning. You can join celebrations in temples nearby or go to places like Isha Yoga and spend the whole night in total joy. Take a dip in the water body nearby and adorn yourself with clean attires and visit temples to do Shivalinga Puja.

Maha Shivaratri is a night of stillness to remember the sacrifices of our loved ones and pray for their good health with absolute consciousness. A day to lose our identity and connect with the Universe as Lord Shiva became still and became Mount Kailash himself. Since modern science has come to a point that explains everything, the cosmos, galaxies, matter, and existence are all manifestations of one energy in a zillion ways. As Lord Shiva is regarded as the first Yogi in the Universe, a festival like Maha Shivaratri answers everything a human desires to find in his life. Maha Shivaratri is a night to experience the oneness of life and open the constrained doors of ignorance.

Celebrating the Vastness of the Cosmos

Not more than 5% of the Universe has Astral bodies, the remaining is nothingness and that is what Lord Shiva is all about. He is a living death and the lord of nothingness that constitute 95% of the cosmos. That is the biggest picture and emptiness is where possibility resides in its most pristine form.

Not only this is about Mahadeva or Lord Shiva but also the world is after the omnipresent and dark. Since today’s world is made of memories and data only while modern science is occupied with doubts and search. To experience the darkness of the universe is to expand the possibilities of human reality. We pray the darkness eventually that sparks our life through various means and technologies inscribed in the universe, aligning with the aesthetics of life. That is why festivals like Maha Shivaratri are important.

As the divine permeates and remains everywhere, the divine must be dark too. Since the sun is the ultimate light in the world, the amount of space the suns of the galaxies occupies in the world is negligible when compared with emptiness or nothingness or darkness. And so, Maha Shivaratri is an astounding way to end ignorance and negativity in search of the unexplored reality protected in total tranquillity. As a night of awakening, stay awake and let your inner do all the talking with the Universe.

7 responses to “Maha Shivaratri 2021 | Why you must Skip Sleep and Sit Straight on this powerful day?”