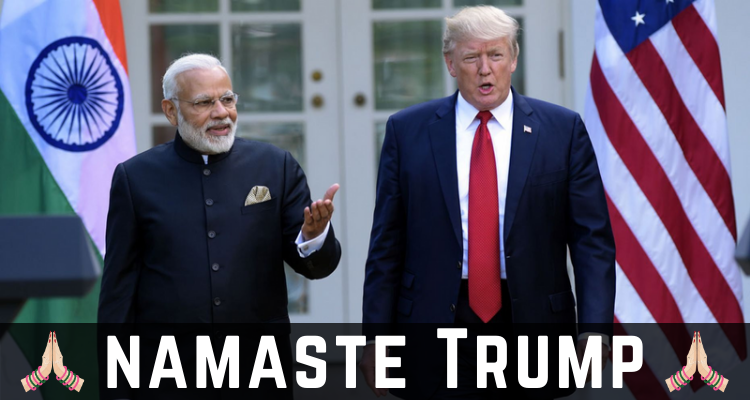 The 45th American President Donald Trump visits India with his wife Melania Trump referred to as “The First Lady”, daughter Ivanka Trump, and son-in-law Jared Kushner from Feb 24 to Feb 25.

The Trump’s India itinerary include the inauguration of the world’s largest cricket stadium, Motera Stadium in Ahmedabad along with PM Narendra Modi where Donald Trump will address at least half-a-dozen million Indian people. One of the most influential leaders in today’s world, Donald Trump will visit Sabarmati Ashram, the residence of one of the most peaceful people in human history; the father of non-violence and India, Mahatma Gandhi Ji. The global symbol of love, the iconic Mughal Monument, Taj Mahal in Agra of Uttar Pradesh is also on the list of places Donald Trump and his family will visit in India.

Why is Trump’s Trip Crucial for US-India Relationship?

Two national leaders to make their country powerful will discuss defense deals, security issues, trade, counter-terrorism, energy usage, and several bilateral matters. It will further strengthen the friendly ties between the two powerhouses of the world. As Whitehouse mentioned, Donald Trump will pay homage to one of the revered figures to have ever walked on this planet, Mahatma Gandhi. The statement said, “It played an important role in Mahatma Gandhi’s life and leadership of the Indian independence movement.”

President Trump’s maiden visit to India will heavily stabilize the strategic partnership between the two countries. The last three presidents of America have visited India, and this explains India’s dominant role in maintaining the global order not only with its neighboring countries but also with South China Sea region and Indo Pacific region. Meanwhile, Hollywood’s business in India nears half of Bollywood, which is a healthy sign too.

Equality of Optics and Substance in Modi-Trump Meet

Gearing up to receive the incredible hospitality from Ahmedabad Airport to Motera Stadium, President Trump is confident about his entry to one of the largest democracies in the world. The Trump administration has been more pivotal in structuring the trade of sensitive technology than the Barrack Obama Government. Back in 2018, Strategic Trade Authorization-1 Status was given to India to sell sensitive technology. A big reason to celebrate for the whopping security in India when the two biggies catch up before a massive crowd.

These two influential figures have been playful while addressing the crowd too. During the G7 meet in France, Narendra Modi was explaining an issue in Hindi while Trump interrupted and commented, “Actually, he speaks very good English, but he doesn’t want to.” PM Modi patted his hand, laughing in the middle of the conversation. Donald Trump considers PM Modi as his friend; the reason why Melania, Ivanka, and his son-in-law are coming to India as a family.

The Viral “Bahubali Trump” Video and Donald Trump’s ReTweet has set the friendly stage for US President Donald Trump’s visit to India. The multi-lingual Indian Blockbuster movie Bahubali 2 – The Conclusion’s intro song was morphed with faces of Donald Trump, Melani Trump, Ivanka, and Jared Kushner with Trump playing Bahubali. The hilarious tweet got the attention of Trump, where he retweeted about his excitement in coming to India.

The viral video tweet ended with a message – the USA and India united! The last year “Howdy Modi” campaign in Houston gathered Indian Americans while a boy was able to click a selfie with both the presidents. The most powerful selfie in the world, indeed. Let us hope this 36-hour schedule of Donald Trump produces one too!

Shringla, the foreign secretary says that the Indian Prime Minister will host lunch while Ramnath Govind, the honorable president of India will host a banquet in the evening. Donald Trump will attend the private roundtable along with industry experts before he bids farewell to India. PM Modi and President Trump have met five times in the last eight months. PM Modi had made the request to Trump for this particular visit during their first meet at the Whitehouse in 2017.

US Presidents who have visited India so far

Barrack Obama, the former President of the USA is the only President to have visited India twice. In 2010, Obama and his wife had been accommodated at the Taj Mahal hotels while in 2015, he was invited for the Republic Day celebrations by PM Modi. It was when Modi and Obama signed an agreement making way for the strong ties now.

“Chalein Saath Saath” was the agreement signed which means

Hope! The parade and roadshows will impress the Trumps as they slowly learn the cultural diversity and world-known hospitality of India.

Are you ready to take up President Trump’s Itinerary?

In his 36-hour tight schedule, he manages to catch up with Sabarmati Ashram, Sardar Patel Stadium in Gujarat, Taj Mahal in Agra, and Raj Ghat in Delhi. Meanwhile, Melania Trump will do a day tour of going to Government schools in Delhi. The itinerary of Jared Kushner and Ivanka Trump is yet unknown, but the Taj Mahal visit will be an inevitable destination in the wishlist of the young couple.

Best Places to See in Gujarat: One of the 12 Jyotirlingas of Lord Shiva – Somnath Temple, Gir National Park for the Asiatic Lions, UNESCO World Heritage Site – Rani Ki Vav Patan, and the world’s tallest statue at 182 m – Statue of Unity which is twice the size of the Statue of Liberty in the USA.

Best Places to See in Delhi: Delhi’s most iconic monument Red Fort, one of the largest mosques in India – Jama Masjid, the serene Lodhi Gardens, the tallest brick minaret of the world – Qutub Minar, Gandhiji’s memorial at Raj Ghat, Bahai or Lotus Temple inviting people of all religion, and India Gate at the center of New Delhi paying homage to the Indian Soldiers who lost their lives in World War I.

Best Places to See in Agra: One of the treasured forts of the Mughals – Agra Fort, Baby Taj – Itimad-Ud-Daulah, and the Symbol of Love that connects everyone in the world with India – Taj Mahal.

Let Incredible India and Ineffable America settle on friendship grounds forever and bring up measures to run in the direction of peace and mutual respect. Summer has officially begun after Maha Shivaratri, and this intense meeting is rising the heat elsewhere on the planet.

Hope! This formidable 36-hours tour of the Trumps enhances the bonding between the two coruscating countries. It is like the US President Donald Trump beginning the summer season with the beautiful day tours in India to the world.