Vaigai Peru Vizha on the land of Bravery and Sanctity – Madurai 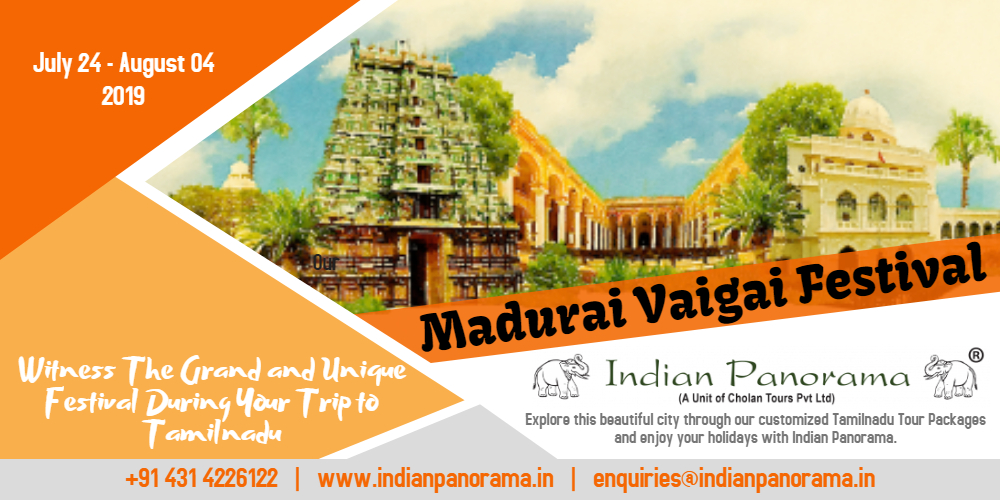 A 12 day-long festival in Madurai unites altruistic souls to make Vaigai River beautiful again! The historic land brims with this alluring event full of positive minds, which began with the worship of the Vedic mantras with pouring out the holy river waters.

A humble gathering of positivity in the terrain of the Pandyas. Madurai has a vast history and is often praised in the Sangam Literature, and other sacred writings. The land is often associated with bravery, loyalty, and rich culture. This city is dotted with temples stretching up to great heights and vibrantly colorful carvings on the gopuram. Its most famous Temple, Meenakshi Amman Temple is situated on the banks of Vaigai River. In a short distance is the resident of an erstwhile king, the Thirumalai Nayakkar Palace, another epitome of grandiose adorned with tall white pillars.

“Thoonga Nagaram” (The City that never sleeps) is the nickname of Madurai since the city is active even at the night with food all around the place. Temples of Madurai like Madurai Meenakshi Amman Temple, Tirpparankunram Murugan Temple, Azhagar Kovil Temple, Koodal Azhagar Temple, Vandiyur Mariamman Temple have earned Madurai the name – City of Temples. The Pancha Bootha Sthala is a place to learn art, architecture, history, painting, and culture of Tamil Nadu. Hope this mega event reveals a lot about Madurai to the rest of the world.

Festival Executives Swami Sivananda Sundarananda, Ramananda, Sivayogananda are organizing the Vaigai festival with the aim of preserving the sanctity of the Vaigai River and taking the people into consideration with regard to the development of the river and environmental awareness.  It is followed by monastic conferences.

Seven tanks have been set up under the names of River like Ganga, Yamuna, Saraswati, Godavari, Narmada, Sindhu and Kaveri to facilitate the landing of hundreds of people in the Vaigai River ahead of the 18th of August.

The positive minds of numerous masses under the organized efforts of “Akhila Bharatiya Thuraviyar Sangam” united with the idea of making the Vaigai River perennial. Water from sacred rivers of India was poured into the pits dug in the once salubrious terrain of the Vaigai River. There are plans to conduct meetings with the Vaishnavite, Sanyasis, Shaivites, youth, men, women, and farmers to come up with fruitful ideas for restoring the greatness of this holy River.

Shendalangara Sampathkumara Ramanuja Jeeyar of Mannargudi righty said, “It was not enough if discussions regarding rain were restricted to festivals.”

Of course, the current situation needs honesty and immediate work as the healing medicine to pacify and recover early from the severe damage done. To make this steady process as worthwhile as possible, a holy Maha Aarthi was performed on the very first day (July 24, 2019) with at least 50 Sanyasis present.

To counter the dry spell pertaining in Tamil Nadu, these poojas can be taken as an awareness notice for all those who are unaware of the current happening. The primary motive of this grandeur occasion is to safeguard and recover the greatness of the Vaigai River.

The Coordinator of this festival, Ramananda said,

“The safeguarding and preservation of the purity of the River is a sacred duty. And by doing so, it is equivalent to the preservation of culture and tradition. Rivers always help humanity in various ways.”

There is always a connection with civilizations and rivers. It is on the riverbeds, Indus Valley and Mesopotamian Civilizations have found strong footholds on this planet. Preserving a River is equal to serving millions of people for several years. As a moral duty and humanitarian work, people should gather for events like these to protect humanity and live by the rules of Earth.

During Lord Shiva and Goddess Meenakshi’s wedding ceremony, a grand feast was set up. Gundothran gobbled and devoured all the food and was still hungry. And so, Lord Shiva asked Goddess Annapoorani to provide him with more food. Gundotharan was so hungry that he ate up that too completely. Later, he became thirsty and so Lord Shiva, to quench his thirst made the Holy Ganges flow toward Madurai. Gundotharan after quenching his thirst asked the Lord for one wish that ‘If anyone steps on to this waterbody their sins get absolved.” And so, Vaigai became as holy as the Ganges River.

The Vaigai River in Tamil Nadu flows through Theni, Andipatti, and Madurai. The River originates in Varasunadu Hills of Periyar of the Sahyadri Mountain Range. It traverses northeast via the Kamban Valley. It lies between Palani Hills and Varasunad Hills.

The other names of Vaigai River:-

The rich history and heritage of Tamil culture in Keeladi, a small village town is an Archaeological Gold spot that if excavated completely would reveal the sensational secrets of Tamil Culture. The spot lies between Sivagangai and Madurai, a hotspot of the Oldest Civilization – Tamil. Earlier unearthings have shown the literary qualities of the women who have lived in this salubrious area thousands of years ago.

Let us hope this festival help with further advancements related to Tamil culture and history.

Plan your trip to Madurai and witness this grand and unique festival during your trip to Tamilnadu which is going to be celebrated on July 24 to August 04, 2019.

Explore this beautiful city through our customized Tamilnadu Tour Packages and enjoy your holidays with Indian Panorama.

A notable event not only for the theist population but for every one of us who forgot what this world is made of – Water. Join this special occasion to celebrate water and know the importance of one of the greatest rivers of all time – Vaigai River.

Save Water. Restore Vaigai. Save Humanity.

Why Coronavirus can’t Survive the Tropical Heat and Indian Summer?