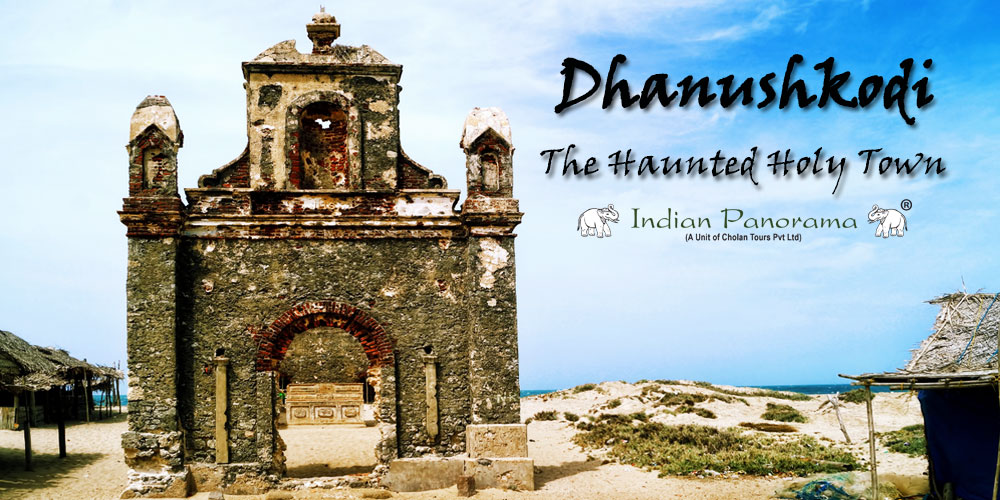 At the south-east tip of Pamban, there is an isolated land near Rameshwaram. Dhanushkodi (“End of the Bow”) is an abandoned town filled with memories of a melancholic past. A Natural calamity in 1964 turned the whole place into a silent uninhabitable zone. The ruined schools, post offices, hospitals, churches, and railway station buildings attract travelers. Also find a ruined police station, and an old coast guard tower welcoming you. Walk listening to the sound of waves in mud creating the experience of a memorable trip.

This town is living proof of uncertainty in life. One must come and stroll in the vast area to understand the other side of Nature. The leaned memorial kept for the 1800 lives is the evidence life was once flourishing. This promontory place is a thin strip of land mass surrounded by the sea. There are only 50 odd fishermen families residing in this deserted area. Once, Britishers had paved a rail line from Egmore to Colombo. They travel through this region for trade activities in Talaimannar, Sri Lanka.

One of the most important and scenic places to visit in Rameshwaram is Dhanushkodi beach. The striking and pleasing beauty of the beach attracts thousands of travelers from all parts of the globe. Dhanushkodi is a wonderful beach; soothing your mind and soul.

It is great to see travelers finding solace in the emptiness of a place. Unhindered by tall buildings, mild winds and gigantic storms rule the remnants here. Arichal Munai (“Erosion Point”) is the end of Dhanushkodi and from there Srilanka is only at a distance of 29 km. Rainy season makes it impossible for tourists to visit the land. There are frequent floods covering the narrow piece of land.  Summer is the best choice for pilgrimage seekers and backpackers. The Rameshwaram-Dhanushkodi NH-49 connects the prominent Kothandaramar Temple.

A famous fisherman, Neechal Kali had survived the catastrophe that struck in 1964. He had continued to spend entire his life on Dhanushkudi. His love for the home soil had kept him alive till 2010. Although it became an uninhabitable place, the land is a sacred tourist spot to date. Many pilgrims prefer doing divine poojas (prayers) here. Trains from Chennai, Trichy, Madurai, and Tanjore take you to Rameshwaram. Madurai International Airport is the nearest to Rameshwaram district.

There is a staunch belief the farthest corner has a bridge connecting Srilanka. A genuine anecdote according to the Indian Epic Ramayana. Hanuman, the faithful follower of Lord Rama had helped him reach the other side of the shore. Erstwhile Sri Lanka King, Ravana had kept Goddess Sita as a prisoner. Dhanushkodi being near the country was the easiest route for Rama for rescuing Sita. Many came to a conclusion it was a rumor, but NASA’s satellite images say otherwise. They show traces of a manmade layered bridge made of wooden blocks, big and small boulders. They called it Adam’s Bridge (Ramar’s Bridge). Many claims to have seen the surreal path during the Tsunami. A few had even discovered temples and other buildings on the sea surface. Unseen until the Harbour Waves struck in December 2004. It concludes that Dhanushkodi has shrunken in its size. The Indian Ocean has a larger part of the land covered inside it.

Collect cute trinkets from the small shopping stalls. They are available near the Dhanushkodi beach. Often referred to as the “Ghost Town”, Dhanuskodi has gained huge tourist attraction. Tourists can enjoy a proper two hours in this town.

Rameshwaram is well-connected to other cities on the mainland by bus and train. Crossing Pamban Bridge is a highlight. It’s recommended that you experience it by train, in at least one direction, as the railway line lies spectacularly close to the sea.

Depending on the time of year, you may also be able to see flocks of migratory flamingos standing together in the shallow sea water looking for food. It’s an amazing sight! The birds are usually there between January and March.

Visit dhanushkodi in Rameswaram and explore the scenic beauty of the beaches and other places that attracts tourists across the globe with Indian Panorama.