Top ‘8 Books to Read’ before planning your visit to India! 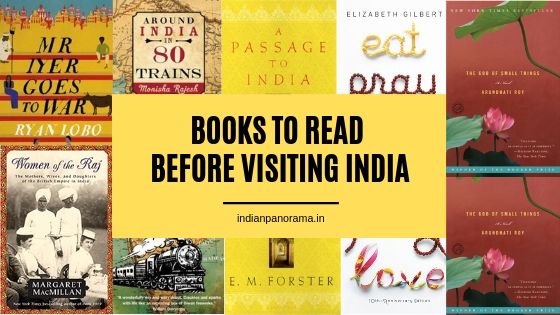 India has something to offer for every tourist visiting the country. The clad mountains, vast desserts, lush green meadows, dense woods attract the global travellers besides the magnificent temples, palaces and forts. Finding out a little about this huge country is found to be worthwhile by many travellers aspiring to visit India.

India, which has a rich tradition and heritage since the ancient ages have been a congregation many small individual kingdoms. The strong thread connecting all the diversities on different parts of the country is the culture rooted strongly in the people’s lives.

Several documentations and stories right from the historical to non-fictional and contemporary literatures are plenty, speaking about India from umpteen perspectives. Every traveller reading a bit from any of these genres will have an insight into India before leaving their native lands.

The epic list in this article aims at the spectrum of travellers desirous to explore India, the peninsular country. To help you figure out what to read ahead of your next trip to India, here is the list of best sellers kindling your interests to explore India in every possible perspective.

An awesome narration by the author about everything across Italy, Indonesia and India. The authors’ venturous excursion far and wide are elaborated in an interesting manner. To find her soul, she went on exploration of food, spirituality and affection. First to Pasta country, she got to know the art, Italian language and get fat by eating lots and lots of Cheese. Next to Land of Religion and mythology “India” where she got to know the art of spirituality. Next to, nature’s paradise Indonesian island ‘Bali’.  This book is certain to touch anyone who has ever woken up to the unrelenting need for change. An added credit is that the book stayed in the New York Best Sellers List close to 187 weeks.

Holy Cow is Macdonald’s often hilarious chronicle of her adventures in a land of chaos and contradiction, of encounters with Hinduism, Islam and Jainism, Sufis, Sikhs, Parsis and Christians and a kaleidoscope of yogis, swamis and Bollywood stars. From spiritual retreats and crumbling nirvanas to war zones and New Delhi nightclubs, it is a journey that only a woman on a mission to save her soul, her love life—and her sanity—can survive. The book on the whole is a lighter look at life in modern Indian times.

3.Around India In 80 Trains – Monisha Rajesh

Can you explore India far and wide in trains? Yes, Monisha, an English Writer has made this possible and she explains how mind full it was to explore India right from the rich to the suburbanite with her Indian legacy. The book explains the hardships and the beautiful moments she came across while traveling through the different regions of this country and it is a real insight into India.

Distance lends enchantment to the view. Yes! This book makes us surprised with the two extreme conditions prevailing across India and the Western World. Though with a rich heritage and culture dating back to several centuries and a pioneer in many of the scientific inventions, India is trying to adopt the new inventions and trending technologies popular in the western world. On the contrary, the Western world is trying to explore the ways and means of getting the salvation, sanctity, illumination and inner piece.

Ryan Lobo’s debut novel depicts hindu mythology, incarnation, economy, political and culture of Varanasi and Kumbh Mela in Uttar Pradesh. A 60-year old Mr. Lalgudi Iyer is the protagonist of this journey who suddenly gets an an epiphany about being an incarnation of a mythological hero, Bhima. Mr.Iyer and his Sancho Panza, an undertaker named Bencho, goes on a series of adventures

6.Women of the Raj

It was the period of colonialism, whole lot of British migrated to India to rule them under a government known as the Raj. This book shows the life of women in both Indian culture and women who turned into ‘Anglo Indian’. The author presents a vivid cultural and social history of women and India in its richness and vitality.

Set against the backdrop of the British Raj and the East India movement during the 1920s, the book describes the expedition by the author into India. It was his novel just after his first visit to India. The theme of the book revolves around friendship and the situations prevailing in a colonised country. The book involves three main Indian characters to give you better ideas about the scenarios in India during the pre-independent times.

Arundati Roy’s novel is powerpacked family story, forbidden love and political drama. It mainly talks about the fraternal twins and the ups and downs in their lives.This novel is a must read to know the culture and political state of India in 1969. God of Small Things has won a Booker Prize.

Read about India, Tour to India, take back bundles of memories to be cherished forever.