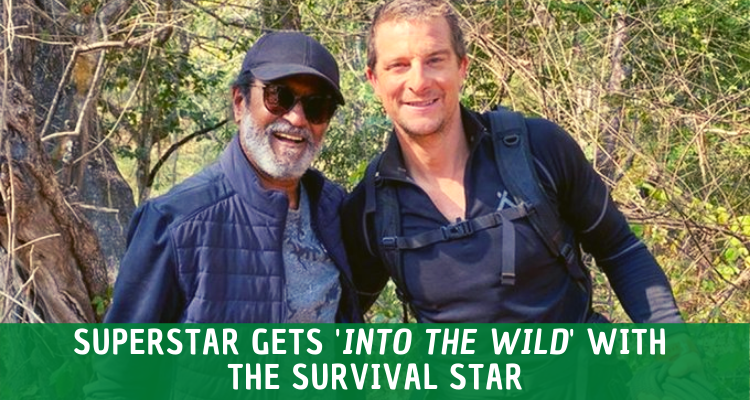 Superstar Rajnikanth is up for an intense TV show, “Into The Wild” along with the king of survivals Bear Grylls. He makes his television debut to bring Awareness about Water Conservation in India. The South Indian Sensation joined the Ex British Serviceman Bear Grylls in Bandipur National Park of Karnataka in his adrenaline pumped-up show – “Into the wild with Bear Grylls.” Bear Grylls is a world-known survival artist who’d come up with intense and raw videos showcasing his survival skills in the remotest of lands. Famous Personalities like Tennis Star Roger Federer and Ex American President Barrack Obama have been featured in the “Man vs Wild” series.

The upcoming series “Into the Wild” of Bear Grylls will feature Rajnikanth as the first celebrity. This time the importance of water conservation is the theme of the first episode. The program will be telecasted on Discovery India while Banijay Asia and Natural Studios produce the show. The former is a famous entertainment company on TV, films, and OTT (Over-the-top media services) platforms. The latter is Bear Gryll’s own firm partnered by Delbert Shoopman.

After David Attenborough-narrated documentary – Wild Karnataka, “Into The Wild” series is all set to feature Karnataka again globally. The wildlife of Karnataka is so diverse that from mammoth mammals to tiny reptiles contribute to the enhanced balance in the ecosystem of South India. The wildlife tours of Karnataka are the best in India, so go explore it in the raw wilderness of the largest state in South India.

What Superstar said about Into The Wild program?

He said Into the Wild is an authentic and unique show which will accomplish two things perfectly – keeping the audience pumped and at the same time, delivers a strong message for the wellness of the society. Rajnikanth mentions that he had approached by Discovery Channel for this beautiful episode which he readily agreed.

Though a super-colossal successful person in the cinema industry, his first appearance on Discovery Channel will be a treat to his global fans and good news for wildlife enthusiasts of Karnataka. As water conservation is the goals of this particular episode, even a half an hour of the telecast of the program will inspire millions of people in the world.

The Beauty of Bandipur Blooms Big!

The integration of the dense regions of Venugopala Wildlife Park which was established in 1941 gave way to the 874 sq.km of Bandipur National Park. IThe expansion further unified Chamarajendra district of Karnataka to create a beautiful biosphere belt.

As a survival test for internationally well-known celebrities, the appearance of Rajnikanth in the very first episode will ignite more personalities to hit the TV screens for the welfare of their state and country. The wild corridors of India and world should flourish like never before to conquer the destructive effects of climate change. These types of programs about water conservation, wildlife preservation, and climate change should frequent after the Rajnikanth Episode on Discovery Channel gets telecasted. This program on Bandipur Tiger Reserve kicks off big and beautiful.

What Bear Grylls said about the South Indian Sensation?

His hashtag #ThalaivaOnDiscovery is the highlight of this tweet. As “Thalaiva” means leader in Tamil, this is Rajnikanth’s favourite nickname in Kollywood and Tamil Nadu.

“Our team is all very excited to work closely with Thalaiva! Much more than a cine star, Rajinikanth is a phenomenon who has captivated audiences across the world with his on-screen and off-screen work. He has always shown such energy and flair in all he does and he will need that courage and determination again on our journey into the beautiful wilds of India”, said Bear Grylls.

Superstar Rajni replied on Twitter, “Thank you very much dear @BearGrylls for an unforgettable experience … love you.” @DiscoveryIN thank you #IntoTheWildWithBearGrylls

The Executive Producers of this show are Deepak Dhar, Bear Grylls, and Delbert Shoopman. As per T. Balachandra, the director of Bandipur Tiger Reserve, they have given 6-8 hours of permission to shoot for Discovery. But the crew packed up super quick within 5 hours. Mohan, the Chief Wildlife Warden requests people to suggest a good name for the tiger reserve and recognize the hard-working staffs of this entire program.

Hope! Into The Wild becomes a great hit and educates millions regarding wildlife and the Importance of Water Conservation in an inspiring way.