How did this Irish Actress become an Eternal Icon of a Small Himalayan Village? 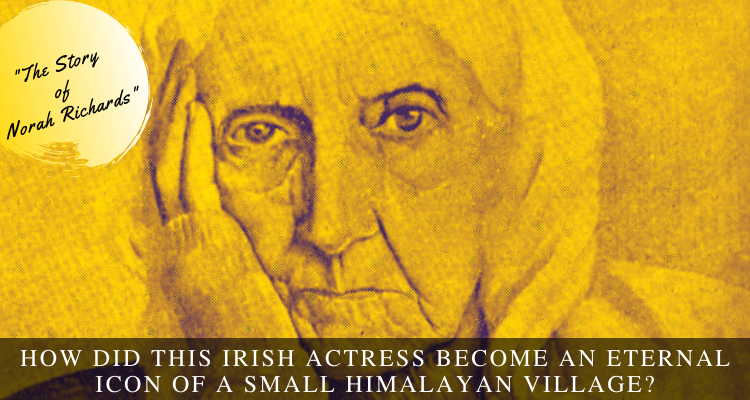 Norah Richards is a household name in Andretta, a small hamlet in the Himalayas. Born in 1876, Norah was a normal graduate of Oxford University. She had to move to London post-marriage and her promising acting skills in plays slowly made her a sensation in the West End. Her life was normal until she came to India with her husband. After her companion accepted a professorship in Dyal Singh College of Lahore (It was with India) for the post of Teacher of English, the life of this everyday girl took a majestic turn.

Though her home was miles away, she made a home out of humanity.

The Ironic Iron Lady of Ireland Who fought the British

Norah hadn’t gained much experience as an actress and her moderately successful career was to be ended soon. She travelled to India with her husband in 1911 and settled there. Yet her passion to let her soul out to imbibe beautiful things stayed. Punjabi Theatre came as a big sigh of relief!  She was a good writer by then more than an actress and so she taught various social workers, pupils, and greenhorns. She was an active performer in the cultural activities of that college.

She was an iconic supporter of the Indian Home Rule Movement against the British Raj. This was a popular movement in Ireland too. She expressed her concern against British Imperialism in her writings and plays. She connected with the Punjabi people like a local leader and had lately gained their respect.

Irish by birth, Indian by heart

Unfortunately, her soulmate passed away in 1924. She could have easily ended her story in India after her return to Ireland in the same year. But it never happened. Her Irish life and old routine couldn’t keep her caged in her country.

“Some birds are not meant to be caged. “

She was one beautiful migratory bird, indeed. All along she knew her home was India. The magic of the Himalayas had worked upon her as well!

Out of curiosity and wild intent, she had bought a tea plantation in Kangra Valley from an Englishman for just one rupee. You read it right! The flowing Beas River and the landscapes of the Western Himalayas should have kept her thoughts alive along with sparkling tea parties with her pupils. She took a flight first from Ireland, a train, a bus, and a horse to reach her new found wonder – A Silent Home.

A Tiny Hamlet into an Artist’s Paradise

Norah Richards became a permanent resident of Andretta Village, a small spilling of a land 1 hour south of Kangra Valley. She put a traditional home known as Jasmine Residence (“Chameli Niwas”) with the help of a local merchant. Using mud, bamboo, and slate, Norah built her humble home and a temporary amphitheatre. Her efforts to uplift the Adretta Village made her pen down impactful plays. Her loyal students from Dyal Singh College acted in those influential plays.

On his autobiography, Bhabesh Chandra Sanyal (1901-2003), a renowned Indian painter and sculptor mention about Norah Richards and a rhythmic relationship she carried with her people. As an epitome of Indian Modern Paintings, artists like him were highly inspired by the efforts of Norah Richards. He reminds, she was liberal and humble with her servants. That she would carry a whistle with her and give consistent break for her workers. They would have tea breaks, hukkah breaks, and meal breaks. Her ability to keep her schedule tight and busy with gardening, scavenging, and writing made her an inspirational figure.

She would burn the midnight oil every single day, in fact, her chimney still hangs there with noble qualities acquired.

A Village in India for the World of Artists

Shoba Singh, the renowned painter in Lahore after Independence came to Andretta and set up a permanent studio. Norah had to unite budding artists to create an artistic hamlet in the Himalayas. That’s when B.C. Sanyal and G.D. Sodhi, then manager of the Indian Olympic Team came to make Andretta the cultural hub for tourists, modern painters, and emerging artists.

The week-long festival conducted by Norah Richards during March month attracted many popular figures like Prithviraj Kapoor and that’s when the popular potter, Gurucharan Singh came to Andretta in Himachal Pradesh. Based on Norah’s advice to construct a workshop in Andretta, Gurucharan Singh came to this hamlet with his son Mansimran ‘Mini’ Singh and daughter-in-law Mary Singh. The couple standing above is one of the remarkable potters of India. They are taking care of India’s oldest studio pottery.

Thus, the efforts of this Irish Iron Lady had transformed an unnoticed hamlet into one of India’s soulful art studio. Punjabi University in Patiala had made a good move by bestowing her efforts with an honorary degree. While Shoba Singh’s Galley and Norah’s Chameli Niwas still stand as a living testimony to the curious and beautiful past of Norah Richards, the Irish Woman who became an eternal icon of a small Himalayan Village.

Best Day to Visit: October 29 (Norah Richard’s Birthday). A day celebrated with plays in Norah’s tiny theatre as she had etched a name in the heart of Punjabi University and Andretta forever. One silent yet salient saviour.

How to Reach Andretta?

By Air: This Himachal Village has its nearby Airport in Dharamsala from where one can reach Palampur in a bus or hire a cab to Andretta directly.

By Road: From Palampur, an offbeat hill station in Himachal Pradesh, Andretta is just 13 km away.

By Train: The nearest major railhead from Andretta is 90 km away in Pathankot while Panchrukhi Railway Station is just 2 km away.

You can explore the list of beautiful villages of Tamil Nadu too.

2 responses to “How did this Irish Actress become an Eternal Icon of a Small Himalayan Village?”