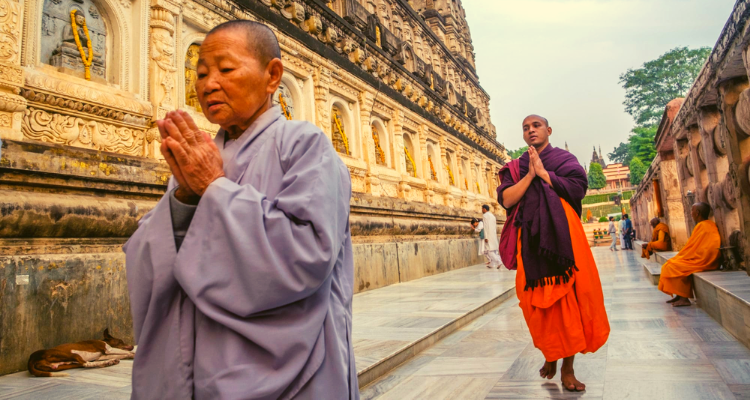 Two of the prominent and important religions in India, Jainism and Buddhism had mostly started their journey from Bihar. There are plenty of ancient monuments and pilgrimage sites to experience in Bihar. A place where some of India’s unread history exists along with the Buddhist monasteries. The best time to visit Bihar is during the winter season, super conducive for sightseeing. Try local delicacies, spend an evening witnessing the art and culture of Bihar, and allocate mornings for visiting Buddhist pilgrimage sites.

#1 Bodhi Tree: The Tree of Awakening

As a direct descendant of the Bodhi Tree Gautama Buddha sat during his enlightenment journey, this sacred destination in India is a must-see pilgrimage site for every person on the planet. Visit Chankramanar, the “Jewel Walk,” lined-up with 19 lotuses and found on the northern end of the Mahabodhi Temple. Bodhi Tree is the centre of all Buddhist teachings and they consider this as the linchpin of the Buddhist world.

#3 Takht Sri Patna Sahib: The Kingdom of Kindness and Kingship

The second holiest Takht in Sikhism tradition. It is regarded as the birthplace of the chivalrous, generous, and educated warrior Maharaj Guru Gobind Singh, the tenth guru of Sikhism. This place is also known as Harmandir Sahib and is one of the highly revered destinations in India. The visits of Guru Nanak Dev Ji and Guru Tegh Bahadur Ji (father of Guru Gobind Singh) are additional honours to this divine destination. Patna Sahib Railway Station is named after this holy place of Sikhs.

#4 Buxar Fort: The City of Mythologies and Memories

A place that has seen enough! From battles between the last Mughal Emperor Humayun and Sher Shah fought in Chousa in 1529 CE to Lord Rama ending the curse of Ahilya to destroying Tadika, the demon Goddess, and Vishwa Mithra, the family Guru of Lord Rama having their sacred ashram, Buxar is a place of infinite history and unimaginable happenings. Buxar is famous for the Battle of Buxar that happened in 1764 between the East India Company and Mughals, Nawab of Bengal, Nawabs of Awadh.

#5 Hieun Tsang Memorial Hall: Where History is a Nobel Hymn

One of the must-see destinations in Bihar is the Hiuen Tsang Memorial built in memory of the renowned Chinese traveller Hiuen Tsang who came to study at Nalanda University in 633 AD slipping out of China through Taxila. His accounts of India during the reign of Harsha remains a cherishable piece of ancient history by Indian historians. The place where he learnt Yoga and gained knowledge from his teacher Acharya Shil is today known as the Memorial Hall. Jawaharlal Nehru was instrumental in saving the memories of the famous traveller by starting the construction of the Memorial Hall in 1957. The construction was finished in 1984.

Madurai – The Oldest Living City of the Oldest Tamil Kingdom

Water Temple or Jal Mandir is situated in the sinless town of Pawapuri. The temple’s other name is Apapuri. This temple is present in the Indian state of Bihar and is dedicated to the 24th Thirthankara – Lord Mahavira. The place exactly where he was cremated. He attained nirvana in Pawapuri between 500 and 400 BC. The deified foot impression or Charan Paduka is present in this temple, one of the 5 important temples in Pawapuri. Red shaded lotuses fill the tank of this sacred temple.

If collecting artefacts is what you like and you love history, Patna Museum is a must visit destination in India. The museum was started in 1917 by the British people and it was also known as Jadu Ghar. A beautiful display of artefacts of the city of Patna. Instruments and archaeological gems make the Patna museum stand out from the rest of the museum in India. British Paintings of habitual life in India and work of the first president of India Rajendra Prasad are displayed in the Patna Museum. There is a 200-million-year old tree fossil in this museum and a sacred casket that carries the ashes of Gautam Buddha.

Aka Quila House, it is the residence of the Jalans, the original owners of the Jalan Museum. The collections from all over the country by RK Jalan, a famous tycoon forms the base idea of this museum. From exquisite art pieces, and objects collected from several decades, to highly ornate artwork, Jalan Museum has more than 10,000 artefacts. The only two private museums in Bihar which was built during 1919. A place where Dutch and English architectural domination is all around the museum, making it a different land altogether in Patna, the capital of Bihar.

To celebrate the 2554th birthday of Lord Buddha, this park was built by the Government of India on 27th May 2010. Two Bodhi Trees are highlights of this park and those holy trees were planted by the 5th Dalai Lama. This park is located near Patna Junction and is also called Buddha Memorial Park. This park is close to another beautiful attraction in Bihar – Mahavir Mandir. The highlights of the park – Pataliputra Karuna Stupa, a library with lots of books on Buddhism, a meditation centre, a museum, and the Park of Memories.

#10 Sanjay Gandhi Biological Park: A Safe Ground for the Endangered

On the prime location of the Patna City, Sanjay Gandhi Biological Park is one of the largest biological parks in India. It is functioning from the year 1973 and has a cover of more than 60 acres. A happy habitat for more than 800 animals belonging to more than 100 species. Leopards, tigers, python, gharial, giraffe, Indian rhinoceros, emu, zebra, black bucks, peacock, spotted deer, and hippopotamus are common sights of this park. The park is equally rich in flora and fauna while the biological garden consists of 300 plus varieties of herbs and plants. An aquarium here has more than 30 types of snakes and fishes. This park is just 2.5 km away from the famous Bailey Road, close to Patna Junction.