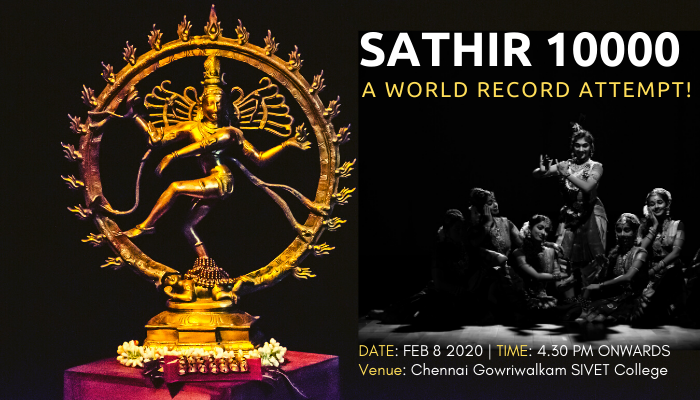 The nature of Tamil culture, literature, folklore, and cultural fests are celebrated all over the world. The uniqueness of Tamil and Dravidian Lands gets more light as “Sathir 10000” come alive. An unbelievable event where more than 10,000 Bharatanatyam dancers from all age groups will perform “Bharatanatyam” on a single stage. This impressive feat by Tamil Nadu government is an attempt to get the Guinness World Record.

The Meaning of Sathir is Pride, Beauty, Skill, and DANCE.

The mother of all classical dances, Bharatanatyam is probably the oldest classical dance known to India. The Hindu Women of South India, especially Tamil Nadu perform this art with precision. The graceful gestures and effortless footwork make Bharatanatyam a beautiful watch. Music, a devoted singer, and the performer’s ardent Guru direct the movement of the artist. Every beautiful movement takes the performer one step closer to God. That is what their eyes convey while embracing the floor with their feet. The Bhava (Emotions and Feelings), Raga (Melody), Thala (Rhythm) maketh the word Bharatanatyam. In Fact, India is referred to as Bharat and Natyam mean Dance. The Dance of India, indeed.

The government museum of Egmore hosts many Nataraja statues. Nataraja is the dancing form of Lord Shiva. There is almost always an eclectic connection with Lord Shiva and Cosmos. This dancing god is famous for his Nataraja pose which is now seeing different forms in different fields. Especially in the cricket field. The favourite shot for Chris Gayle, a West Indian cricketer.

While the steps of Lord Shiva in various Indian temples are performed in Bharatanatyam and Kuchipudi. Particularly, Bharatanatyam uses his Nataraja Pose to enthral the crowd. So, what is in a Nataraja Pose? It is the Bhujangatrasita Karana pose where Lord Shiva is avoiding the snake and lifting his left leg toward the right hip. So, what’s the hidden meaning of the Nataraja Pose.

The Five Characteristics (Panchakritya) of the Nataraja Pose:

Creation/Srishti: The left hand of Lord Shiva carries a Udukkai and its vibrations are connected to the vibrations of the Universe in which life happens between birth and death. This has a strong connection with the Big Bang Theory.

Destruction/Samhara: In his raised right hand, Lord Shiva carries the fire of transformation which is connected to the Buddhist ideology of There is no being but only becoming!

Protection/Sthithi: The open forearm talks about change and instructs the world to neglect fear of change as Change is Constant. This is one of the intellectual preachings of Lord Krishna.

Concealment/Tirobhava: The lowered left palm indicates the secrets of lives. Lord Shiva is the ultimate creator of illusion or Maya and the clandestine chambers of ignorance.

Liberation/Anugraha: The closed left hand and raised left foot denotes the Moksha or complete liberation from the Cycle of Rebirth. It is a strong concept amongst Hindu devotees and that is what the dip in the Ganges of Varanasi is all about.

Famous Chola Temples likes Gangaikondacholapuram also has the statue of Lord Shiva performing the cosmic dance. The architectural skills of Tamil and Dravidian Builders never missed out to showcase the dancing icon, Lord Shiva. It is impossible to separate Bharatanatyam, the Temples of South India and Lord Shiva. Meanwhile, the Ananda Tandav of Lord Shiva can be seen in Kailasa Temple in the 16th Ellora Cave in Aurangabad.

Feel the cosmic vibrations of Lord Shiva in the modern avatar attending SATHIR 10000 in Chennai on Feb 8th 2020.

Join the sparkling atmosphere with 10000 plus people for Sathir 10000 on Feb 8t 2020. May Lord Shiva’s sight fall on you and enhance your stay on Earth.

One response to “Sathir 10000 | A Guinness World Record Attempt with 10,000 Bharathanatyam Dancers in Chennai”