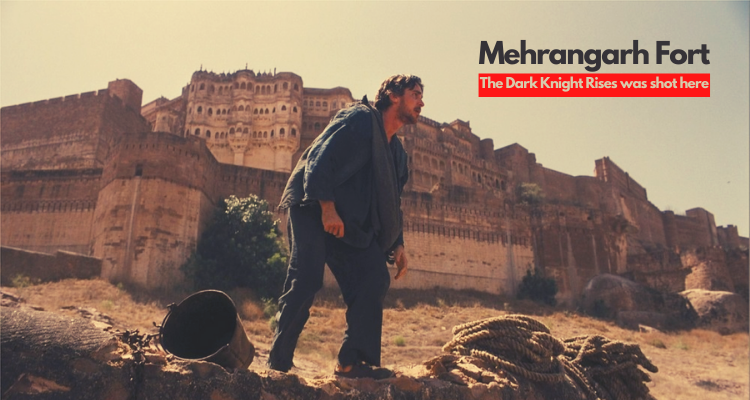 If you’re a true lover of history and want to expand your knowledge about Indian Forts, Mehrangarh Fort in the blue city Jodhpur of Rajasthan is a great start. This is not just some ordinary fort but a formidable fort that has even impressed Christopher Nolan, the iconic Hollywood Director, to shoot his noteworthy flick – The Dark Knight Rises. That scene where Christain Bale claims out of Toorji Ka Jhalra step well and stands like another sun in front of the Fort of the Sun, Mehrangarh is a masterpiece.

Even, Jungle Book author Rudyard Kipling feels the same and he takes that extra mile to express his love for the fort saying this –

Such is the beauty of Mehrangarh Fort. It was built by the founder of Jodhpur, Rao Jodha in 1459 and since then its pride and glory are glowing in the history books. This is easily one of the must-visit and beautiful forts in India. According to textbook records, Sun was the ultimate god of the Rathore Clan and Rao Jodha would have kept the name “Mihir” (The Sun) and “Garh” (Fort). The locals started to refer to it by the name Mehar-Garh and it eventually became Mehrangarh Fort.

Another interesting legend about Mehrangarh Fort involves Cheeria Nathji. It is believed that he was meditating on the site where Rao Jodha had planned to erect Mehrangarh Fort. When he was asked to leave the place, sage Cheeria Nathji had become angry and decided to curse Rao Jodha’s family. Though Rao Jodha tried to pacify the hermit’s rage by building a temple for him inside the fort, Cheeria’s curse of water scarcity continues to astonish Mehrangarh and Jodhpur.

Mehrangarh Fort is 69 feet wide and 118 feet in height and it is well known for its massive courtyards and intricate carvings. This ineffable fort also has a museum with an enormous collection of costumes, paintings, ammunition, and arms of the Rathore dynasty. Not just that but also artefacts and important relics of the Mughal Dynasty.

To commemorate the victory over Jaipur and Bikaner, different rulers of different periods have erected seven gates in Mehrangarh Fort. Out of all those gates, the cannonballs imprints carrying Dedh Kamagra Gate is a noteworthy treasure for historians and history enthusiasts. Another treasure is just left of the Loha Gate where the hand impressions of the royal Satis, i.e. the wives of the Jodhpur kings are still echoing the heart touching days of the past.

The hill in which Mehrangarh Fort stands is declared as a National Geological Monument by the Geological Survey of India. The rock is a Malani Igneous Suite Contact. The rock is mega evidence of the Precambrian Age’s last phase of igneous activity of the Indian Subcontinent. A unique geographical phenomenon every Jodhpurian should be proud of.

So, historically, geographically, and culturally speaking, Mehrangarh Fort is a treasure trove for the world of history and travel lovers.