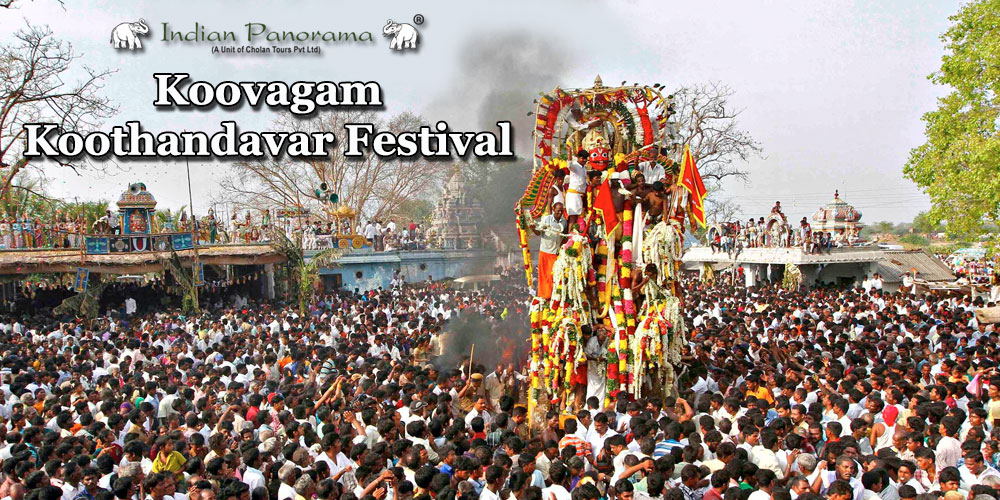 The only festival in Asia with all the participants as Transgenders takes place in Tamil Nadu, the South Indian state. Lasting for eighteen days during the Tamil months Panguni and Chithirai, that is between April – May, this unique Koothandavar festival is celebrated in a pomp manner. Koovagam, the small village near Vizhuppuram in the South Indian state of Tamil Nadu is the epicenter of this festival. The village is flooded with thousands of transgenders and general onlookers of the festival.

Transgenders, the third genders in this world, who have been quarantined by the society in most of the places due to the difference in their physique and behaviour. We have heard about these transgenders driven out of their homes and earn their living by doing various jobs. You might have seen them while traveling in trains and during the local festivals. In most of the places, especially in North India, they are given the first respect in some of the festivals. Senior members of such transgenders take care of the youngsters in their team and guide them to lead a respected living. Unlike the earlier days, they have started to get employment even in the Government sectors and some of them have become writers and classical dancers recognized in the world forums. Though have diverse kind of lifestyles, the centre point bringing them all together is the Koothandavar festival celebrated every year.

The legend behind this festival is quite interesting, referred from the Hindu mythological epic Mahabharatha. Sacrificing a human is mandatory for winning in the Kurukshetra war, advised by Krishna to the Pandavas. The three eligible persons are Lord Krishna, Arjuna and his son Aravan as no one else volunteered. But except Aravan, the other two are the fighters on the field, so Aravan volunteered himself, but expressed his wish that he wanted to enjoy the bliss of a marriage relationship before being crucified. As no women came forward to marry him, who is going to die the next day. So Lord Krishna himself took the form of a woman named as Mohini and married Aravan. As decided, Aravan was killed the next day and everybody knows the result of the Kurukshetra war.

Besides the mythological details, in the history also, we have come across such transgenders. One classical example is Malik Kafur who was the right hand for the second most powerful king of Khalji Kingdom, Allaudin Khalji. Joined as a soldier, with his immense power and bravery, he raised to take care of the entire army and expanded the territories of Allaudin Khalji, mainly in South India, defeating the Pandya Kingdom. He was such a brave fighter, despite his physical deformity. He can’t be ignored while talking about the history of Mughal invasions in India and I would even say, the victories gained by Malik Kafur, laid a strong foundation for the Mughal Empire to last for many centuries in South India.

The legendary incident is quoted as the base for the annual festival celebrated in Koovagam. There is an exclusive temple for Aravan named as Koothandavar, remembered for his sacrifice during the war. The transgenders from all parts of the country and even from the other South Asian countries arrive at Koovagam to take part in this festival. There are interesting events everyday through out the period to entertain the participants and the onlookers as well. Beauty contests, dance performances and other kinds of cultural events are conducted by the transgenders on all the days, where we have to really admire their calibre to take the life in the most beautiful way.

The last but one day is very auspicious during this Koothandavar festival. On this day, all the transgenders dress up themselves as brides getting ready for their marriage. The priests tie them the mangal sutra on behalf of Aravan. It is assumed that, all of them are representing Lord Vishnu in the form of the gorgeous Mohini,  marrying Aravan on that day. Celebrations and joyful entertainments prevail everywhere on the marriage day. Cultural programmes are conducted and the people from Koovagam and other nearby villages and cities assemble to witness the marriage of Aravan with the thousands of Mohinis.

The next morning is the Chariot procession which starts with the idol of Aravan and it goes around the villages. This day is also very significant that all the Aravanis, who have married the Aravan the previous day, are removing their mangal sutra, wearing a white saree, throwing their bangles and they take the widowhood, symbolising the sacrifice of Aravan. You can see huge cries everywhere mourning the death of Aravan and his sacrifice. With these two days’ events the festival comes to an end.

There are special buses plying to Koovagam during the festival and necessary facilities are made by the Government and the local authorities. It is really a unique experience visiting Koovagam during this festival, where the members of the deprived community are the epicenters who enjoy the only chance of getting married in their life.

Come and witness the Koothandavar festival, unique to Asia, unique to the mankind, unique to the Transgender community. Visit Koovagam and we Indian Panorama are sure, your perceptions about the isolated community will change forever.