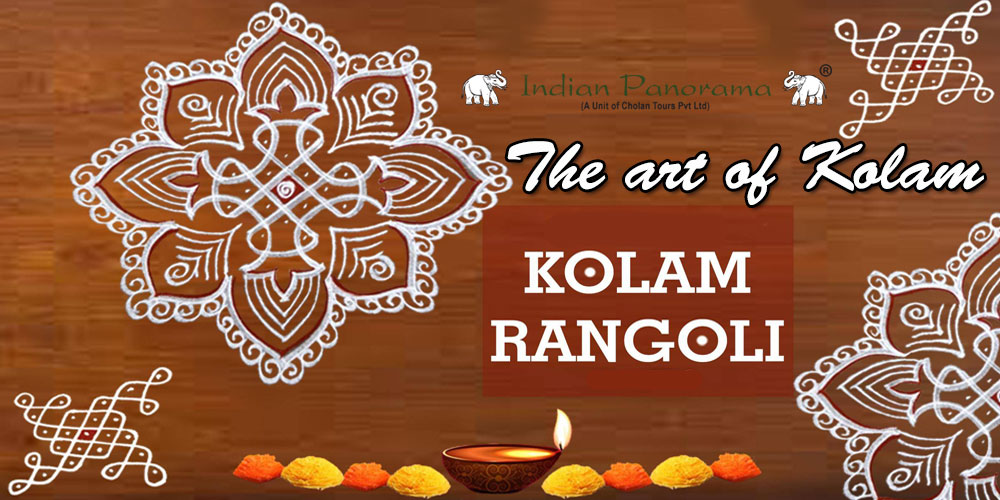 Turbulently Smooth Hands at Work – The Art of Kolam

Although a cosmopolitan atmosphere is widespread in most of the bustling cities of South Indian places like Tamil Nadu and Kerala haven’t lost the traditional touch. Women dolled up in sarees express their soulful cravings, happiness, dreams, visuals, and random thoughts in “Kolam”. Thumbs are into texting these days but a few households prefix texts using a beautiful texture of rice flour, chalk powder, and earthy colors in the morning.

The women of these homes have a sense of pride in warding off the evil spirits from entering their homes. According to Hindu mythology, a newly married bride becomes a part of the house once she crosses the home’s threshold. So, a Kolam (Tamil) or Muggulu (Telugu) or Rangoli (North India) or Alpana (West Bengal), Aripam (Mithila) or Hase (Karnataka), or Golam (Kerala) means a lot other than decorating with a desired geometrical pattern. It is an art where women unleash their inner grace and make beautiful complex patterns to be admired forever just like her heart. This aesthetic art-form is mostly a women-only zone where they draw with grace and perfect their designs every single day.

From Grandmothers to daughters, every lady was once obsessed about keeping their homes clean and picturesque. The crushed rice is eaten by ants and birds, thereby feeding other living beings through graceful art. Popular Hindu customs say Mother Earth suffers all kind of stressful happenings and so celebrating her daily is important for our health and overall wellness. Likewise, the symbols used in Kolams are important too. An inverted triangle represents women, normal triangle for a man, circle for nature, square for culture, lotus for the womb, and a pentagram for Venus and five elements according to Author and Mythologist, Devdutt Pattnaik.

John Layard, a British Anthropologist has identified Kolam patterns in Malekula which is an island in the Republic of Vanuatu (1600 km away from Australia) matching those in Tamilnadu. Nammalvar, the 5th Alwar saint dedicates a whole poem to the god of the threshold. Another story of Gopiyars adorning their thresholds with kolam to reduce the pain caused by Krishna’s absence explains the significance. It is also one of the sixty-four arts of Kamasutra.

“Historians strongly believed people setting out on maritime voyages remembered the constellation of stars. Once they get home, those celestial designs are drawn as terrestrial diagrams to record their travel path. Useful for the next adventure”.

The pictorial language is just like human lives connecting everything. Indus Valley and Sumerian Civilizations have their own Kolam theories and practices. While places like Indonesia, Malaysia, and Thailand celebrate this art form for various reasons. It is not just like a doodle but more folk art. Pookolam is done using flowers in Kerala.

Symmetry, an absence of overlaps, smoothness, the texture should connect in a graceful geometry for the perfect Kolam. Affinity toward mathematics easily improves the imagination in the drawing patterns.

“Symmetry captivates even the most critical of observers.” – Hercule Poirot

This freestyle art cannot escape the properties of geometry. Ezhai Kolam and Pulli Kolam are two types where the former has continuous curves and later uses “kambi (lines)” to connect the dots. Kolams are women’s visual poetry showing who is in charge of the home in the olden days. Welcoming Goddess Lakshmi and Sun god through careful smearing of the crushed powder using the thumb, index, and middle finger is a must-do in the Agraharam. The threshold is swept, washed with water, cow dung is coated, and there you go, it is time to get creative. Areas like Tanjore, Mylapore, and Chidambaram conduct competitions especially during the Marghazhi season (the ninth month of the Hindu Calendar) where red-bricks and other colored powders are used.

Women and Kolam – The Gracious Bonding

The grace of women is evident in her kolams? Oh, really! Maybe, since the concept of stickers and time-saving stencils have made womenfolks to think being feminine is a waste of time. But, a decorated household which has stirred many anthropologists to conduct research is nothing but a miracle.

A busy and intellectual woman may spend time beautifying her home and this isn’t going to make her a poor leader or weak women. Men have tried to enter the boundaries of this art but couldn’t really succeed like women. But it is her personal choice but every now and then this healthy, healing, and happiness attracting practice could be performed with utmost imagination to preserve the natural grace from oozing out due to office work. Women might not miss a holistic art just for the sake of winning. Real women don’t win like men but succeed like women.

“A true wife is she whose virtues match her home” – Thiruvalluvar

From small hamlets to bustling big cities, South India is losing this art due to a busy lifestyle but travelers can still admire the beauty of this complex geometrical patterns in various earth colors during festival seasons and special occasions.

The South Indian culture is differs a lot from any other part of India whether it is dress, music and art. South India is a fascinating land boasting of rich cultural heritage and architectural wonders. South India tour offers you a glimpse of the unique form of art, culture and tradition which characterizes their lifestyle sprinkled across southern part of Indian subcontinent.

Visit the South Indian states like Tamilnadu, Kerala, Karnataka and other places to experience the lifestyle and heritage arts with Indian Panorama during your South India Tour Package.