Holi – the festival of joy and colors 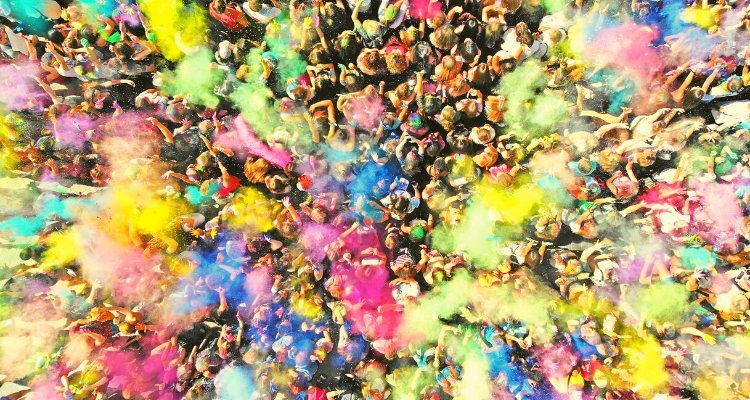 Holi, the festival of colours that marks at the end of winter and the beginning of summer. It is celebrated with utmost joy throughout the country. Similar to many other festivals in India, this festival also symbolizes the victory of good over evil in India. People of all age groups with their faces and clothes smeared with different colours of ‘Gulal’ celebrate the festival with great enthusiasm and fervour. Boring! Here is the legend. Like many festivals in India connected deeply toward the roots of mythology, Holi hasn’t escaped the folklore. The story in short. Once, a cruel king Hiranyakashipu wanted everyone to worship him. To the irony, his son, Prahalada denied praying him, instead, he worshipped Lord Vishnu. Out of anger, he commanded his sinister sister to burn Prahalada into ashes using her powers. But, Holika’s powers reversed due to her evil thoughts and the same immortal fire burnt Holika leaving Prahalada unharmed. Holika Dahan before Holi is celebrated for that reason and the next day, colours spread joy throughout the country. There are several other stories as well, even one connecting about Lord Krishna and Radha.

The Unknown Side of Holi

The 145 degree Fahrenheit produced from Holika Dahan is not just a sanctimonious event but there is science behind it. Like sun rays keeping us healthy, the heat from bonfire will burn the bacteria in our body. Women and men dancing around the fire and the surge of different colour shades have numerous health benefits. The energy of the festival ends tardiness supplying palates of briskness for the whole year.

The Happenings of Holi

“Bura Na Mano, Holi hai” (Don’t feel offended, it’s just Holi) are the words uttered by joyous people who smear other people with vibrant colours. Water balloons stuffed with different shades and “Gulal,” the colour powder dolls up a person in mixed hues, making them smile and end-all regrets. The “festival of colours” or “festival of love” for everyone, is celebrated in different parts of India as a symbol of triumph over the evil.

From “Lath Maar” where women pile up with “Dandal” or sticks to beat up men playfully, drinking “Bhang” intoxicated by Cannabis, throwing ash blended Gulal on faces on Ganges to attain salvation, rain dances with colourful waters spluttered elsewhere, the barefoot walk on fire pathways by the locals of Kokapur village and adoring elephants in Rajasthan, to ending fights between family, friends, and everyone, Holi isn’t just a festival but a happening celebrating the love for humanity more than anything else.

The Best Place for Celebrating Holi

Regions like Braj, Vrindavan, Mathura, Barsana, and Nandgaon celebrates Holi like no other place in India. For this, one must go to Uttar Pradesh for seeing the real colours of Holi. Tourists flood these areas during the holy month of Holi. “Dol Jatra” is yet another form of Holi Carnival where people sing and dance in West Bengal. While, South Indians worship Lord Kamadeva, the God of love, on Holi. In Uttarakhand, classical music lovers could team up for enjoying “Kumauni Holi” where they can listen to Classical Ragas. While Bihar people clean their households observing the grand gala.

Does boredom occupy your mind? Do you want to spend your time meeting with beautiful strangers? Are you ready to explore the real India?

The night before Holi: Holika Dahan

India gifts you Holi for your unplanned Holiday!

Indian Panorama will help you to plan your customized holiday trip to India.