A visit to the masterpiece of rock, housing number of monolithic architectures in the form of cave temples will be an entirely unique experience to the travelers. Visiting the Ellora caves will undoubtedly transform your perceptions about traveling in India. Ellora has everything a traveler looks for. The ancient heritage and culture of India are well exhibited in the cave temples of Ellora. The entire complex is listed under the UNESCO heritage site and is taken care of by the Archeological Society of India. 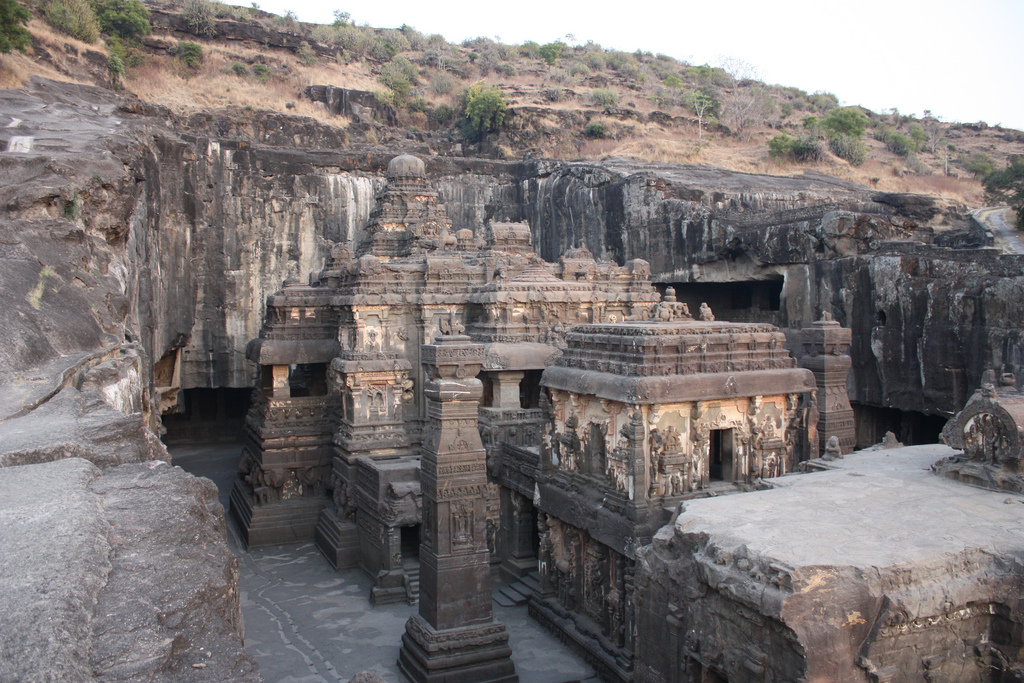 Located at just 30kms from Aurangabad in Maharashtra, the caves complex can be reached using the public transport system. If you want a more adventurous and fun filled trip, go for a tuck-tuck. The entrance of the Ellora caves welcomes you and instigates a sense of curiosity in you about the treasures inside. Being the largest monastery-temple cave complex in the world, Ellora is still a mystery for the global travelers.
The cave temple complex houses temples for all the three religions as Hinduism, Jainism and Buddhism. You can explicitly identify the religious harmony prevailing in the ancient India just by looking at how close to each other these cave temples are. There must be around 100 caves like this dating back to the period between 600 – 1000 CE, out of which only 34 caves are open to the public.

Though we have lot of details documented by the historians on the religious aspects of this cave temple complex, Ellora was the most prominent trade route in the Deccan region covering the entire South Asia, because of which Ellora has been in the history for a long time.

The cave temple complex cannot give any concrete informations to the history buffs or the archeologists with respect to the chronology. As the cave temples of different regions are carved in a layered format, it was extremely difficult to identify the time period. Right from the Vakataka dynasties up to Rashtrakuta dynasty, the contribution of the artisans over the centuries can be seen across the rocky mountains of the Western ghat ranges. 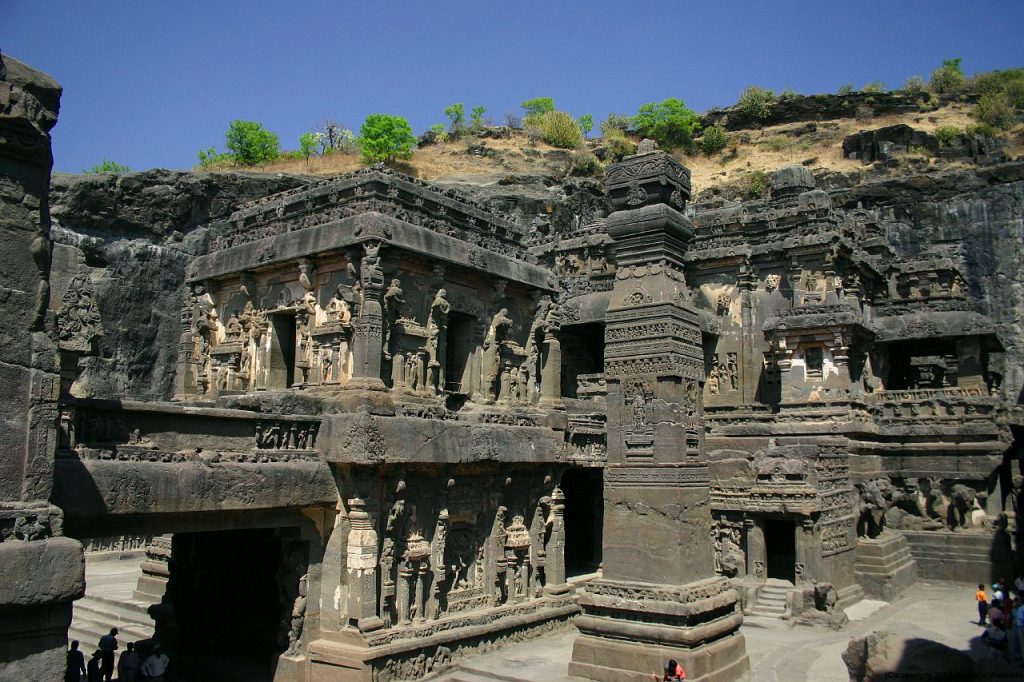 When you first visit the Buddhist caves located at the southern side, all the 12 caves make you awe struck. The monastery type temples houses prayer halls, kitchens and even living rooms. The Buddhist monks must have spent many number of years in this complex, following the preaching of Buddha, in search of wisdom and knowledge. The onlookers are awestruck with the spell binding beauty portrayed on the statues of Gautama Buddha and other Bodhi Satva saints. The craftsmanship give the look of a wood to the stone carvings which have been lasting after centuries.

Out of all the caves representing the Hindu temples, the cave 16 holds a prominent space. The entire massive architecture is carved out of a single rock and this temple is popular among the tourists as Kailash Temple. Invariably all the Early Hindu temples are found to be dedicated to Lord Shiva with the installation of the Linga idol and a space for Parikrama(Circumambulation). The Kailash temple is said to be the culmination of the artwork and the architecture representing the carvings of the various Hindu Gods and Goddesses. It is also surprising that there are carvings portraying the childhood days of Lord Krishna who is the prominent God worshipped in Sri Vaishnavism. Though many of the monuments have seen severe damages due to the invasions and wars, the intricate artworks and the carvings have remained intact all through these centuries which is still a wonder or a mystery. 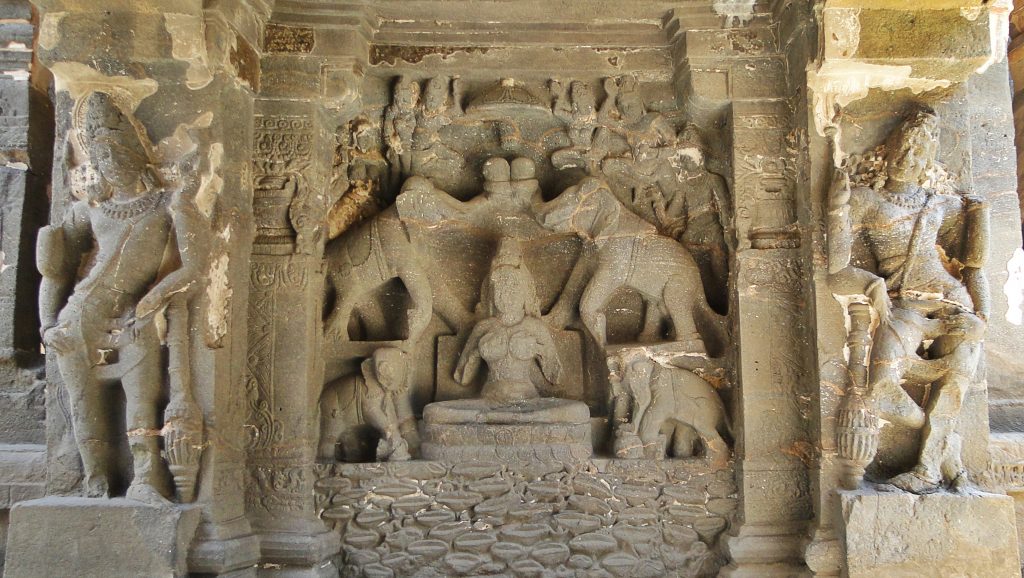 The cave temples for the Jainism are from Caves 30 to 34. The statues of Mahavira who is the originator of the Digambara sect and also the various Gods and Goddess are found in these cave temples. Though the number of cave temples are lesser for Jainism compared to that of Buddhism and Hinduism, the exotic designs and the intricate works in these temples make us forget the comparison. It must be true that even the architects who had spent their time and energy in making this eternal structures would not have believed that all the temples are man made. The exceedingly wonderful craftsmanship have made everyone think that all the temples are self existent right from the time the universe was created.

If you are a history lover, photo fanatic or a leisure traveler or you may come under any category, Ellora caves temple complex is definitely a “Not To Miss” site to explore deep into the tradition and culture of India in the religious perspective.
Right at the entrance of the Ellora complex, you have options to taste the local food items. Inside the complex, you have facilities for drinking water and there will be no eat outs. There are very good hotels to stay in Aurangabad and many of the hotels cater to the needs of the international visitors.

So, plan a visit to Ellora caves during your trip to India. Spending few hours inside the cave temple complex will explain you why is India remarkably Incredible !!