Have you ever seen the picture of a God with a potbelly, long trunk and big years, having a small mouse as his vehicle in contrast to His hefty shape? Lord Ganesha, popularly called as Lord Vinayaka or Pillayar is believed to be the son of Lord Shiva as per the Hindu Mythology. Lord Ganesh is worshipped across the country and diasporic popularity does He have due to the widespread population of Tamils across the world.
The ten days festival celebrating the birth of Lord Ganesh is a very popular one in India. In the northern states of the country, the festival is celebrated in a very grand manner beyond the imagination of anyone and on the contrary, the festival is privately carried on at homes in the southern part of the country.Why Ganesh Chaturthi?The story behind the birth of Lord Ganesh is very interesting. Being the favorite son of Goddess Parvati in Mount Kailash, She used to make him out of sandal wood dough and give life to him. He used to guard the room when Goddess Parvathi was taking bath. One day when Lord Shiva came there, obeying the words of His mother, the little boy Ganesh did not allow Him inside. The infuriated Shiva, severed his head. When Parvati came to know about this and on her request, Lord Shiva gave the boy life by fitting the head of an elephant to his body. Thus, Lord Ganesh was born and this day, the fourth day of the waxing moon during the Tamil month Avani which falls either in August or September is celebrated as Ganesh Chaturthi. This year, Ganesh Chaturthi falls on 13th September, 2018. 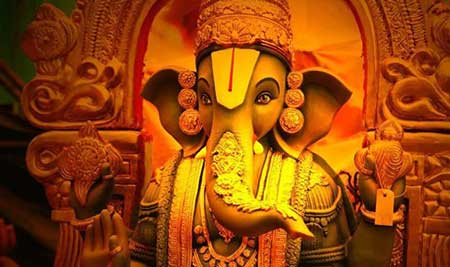 The preparations for Ganesh Chaturthi starts well ahead. Local artisans are pre booked for clay idols of Lord Ganesha in various sizes ranging from 2cms to 21 ms depending on whether they are for domestic display or for community celebrations. In most of the states in India, you can see large pandals (large halls with temporary thatch roofs or separate buildings) are kept ready for inviting Lord Ganesh on the day of Ganesh Chaturthi. During specific time on the day, Lord Ganesha is welcomed to be the guest and bestow His blessings on the worshippers. He is offered with rice balls (Modhakam), flowers, and other delicacies and special poojas are made. The prasadams (dishes that are sanctified) are distributed to the public. 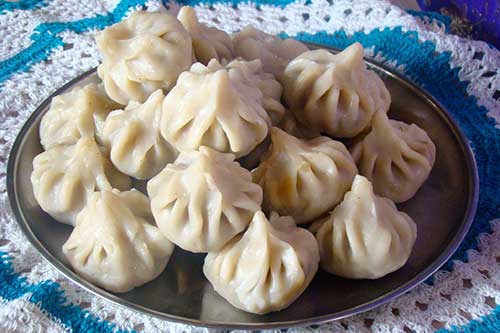 At homes, the celebrations are at a smaller level compared to the community celebrations. A separate place in the house is allotted to place the idol. The place is decorated with flowers and other materials. The clay idol either made by the people at home or purchased from the artisans is kept and bedecked with new clothes, jewels and flowers. Same is the case for the vehicle of Lord Ganesha , the small mouse. Then, the items prepared specially for this occasion are kept in front of him. Either the head of the family or the woman in the family chant the mantras by means of which Lord Ganesha is welcomed to be the guest of the house and bless everyone with boons. After the poojas, the rituals come to end for the day with a delicious lunch.

Temples having Lord Ganesha as the presiding deity celebrate Ganesh Chaturthi in a very grand manner and also the other temples which have a sub shrine for Him. Kanipakkam Vinayagar temple, Pillayarpatti Vinayagar temple and Trichy Rockfort temple are most popular among the all. A huge rice ball of approximately 150 kgs weight is offered to the God in the Rock fort Uchipillyar koil, Trichy on the eve of Ganesh Chaturthi. Day long poojas and rituals are taking place in the temples and thousands of devotees are attending the functions.

The highlight of the ten days Ganesh Chaturthi festival is the Ganesh Visarjan. The idols of Lord Ganesha made of clay or paper-mesh are taken in huge processions and immersed in the nearby water bodies. It is believed that Lord Ganesh gets back to Mount Kailash to be with His parents after his short stay with His devotees and He will be back again during the next year. Mumbai, the capital city of Maharashtra is renowned across the world for the unimaginably huge processions with more than Hundred fifty thousand idols of varying sizes taken to immerse in the Arabian Ocean. 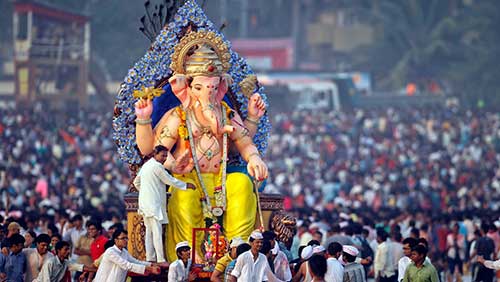 Likewise, you can witness large processions at almost all parts of the country carrying out the ritual of Ganesh Visarjan. The beliefs around Lord Ganesh are countless. He is believed to be the obstructer of all hurdles that may block our progress. So it is a very common practice to worship Lord Ganesh before commencing any activity at home. Even it is a daily practice to do Thorpikaranam (Thorpi means hands and karanam means ears) atleast 12 times in front of Lord Ganesha. This is devised as a practice to submit our prayers to him in the beginning of the day and also to improve our health. Thorpikaranam is a very popular ancient yogic practice originated in India, followed in the name of Super Brain Yoga in the western part of the world.

Some of the countries outside India celebrating Ganesh Chaturthi are France, U.K, North America, Singapore, Malaysia where the Tamil Speaking Indians have settled. 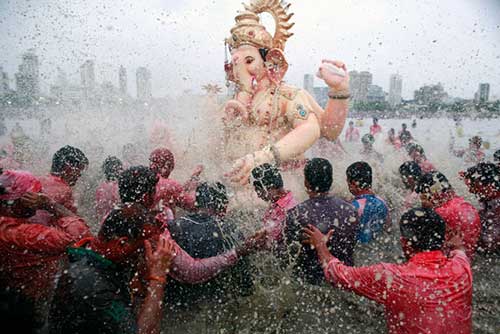 Ganesh Chaturthi is believed to bring in new beginnings, new challenges and with His blessings, new victories. Plan a visit to any of the nearby areas where you can be a part of this grand Ganesh Chaturthi celebrations and get the blessings of Lord Ganesha. All begins well is all that ends well !!