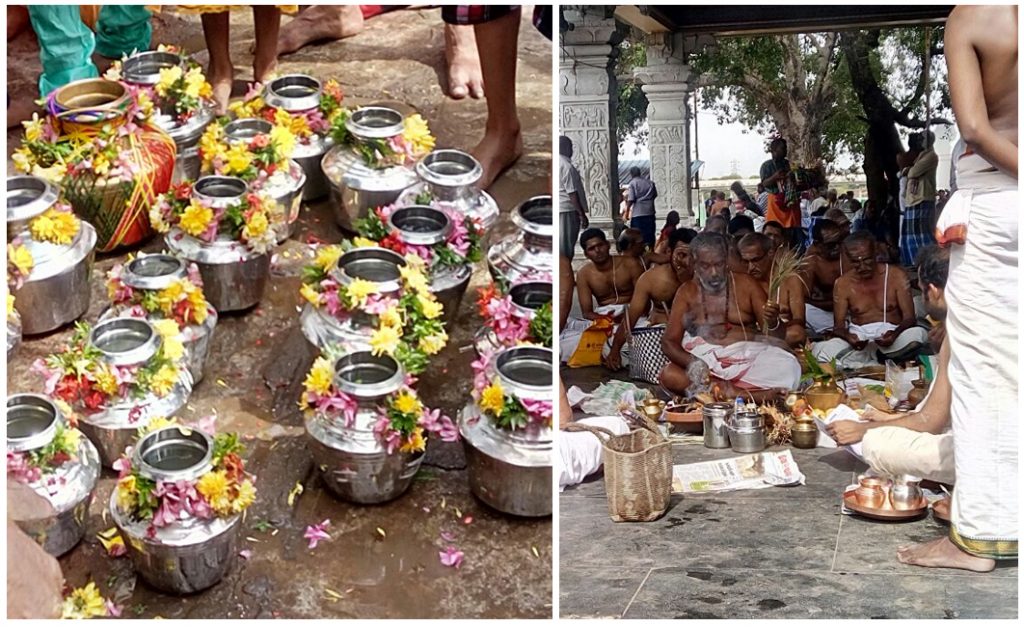 Avani Avittam, the day with abundant religious significance as per the concepts of Hindu Mythology is celebrated with reverence at a grand scale in almost all states of the country. Certain communities in Kerala, Tamil Nadu, Odisha and Maharashtra celebrate Avani Avittam with great zeal. This year the Avani Avittam festival falls on 26th of August 2018.

Avani Avittam is also called as “Upa Karma” or “Yagnopaveetha Dharana”. As per the Hindu mythology, it is believed that Lord Vishnu reincarnated himself as Lord Hayagriva, the God for knowledge and He taught the Vedic principles to Lord Brahma and this event is cited as “Brahmopadesam”. The Full moon day of the tamil month Avani with the star Avittam is the day when such a significant event happened in the history. This is the very reason why Avani Avittam derives its name.
Everyone knows that the ancient Vedas do not have any documented records and the mantras are passed on from one generation to the other only orally. People belonging to certain communities who have strong beliefs tend to lead their lives as per the instructions cited in the vedas. They fall into any one of the categories of Vedas like Rig, Yajur, Saama and Adharvana. Every Vedic procedure contains hundreds of chapters and thousands of verses or Mantras in it. Obviously, these mantras explain the greatness of the religious aspects and how best one’s life will be if the procedures prescribed in the vedas are followed in the normal day-to-day lives. 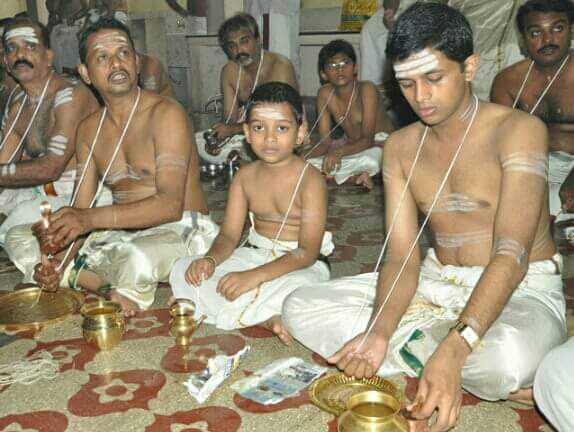 As per the procedures, the male child in a family following any of these four vedas, undergoes a ritual called “Upanayanam”, at the age of SEVEN . This is considered to be a very sacred and important ritual in the life of that male child. The child will be bestowed with a holy thread called “Yagnopaveetham” or “Janeyu” which is believed to be his third eye of knowledge and wisdom. The child who had been under the complete care of his parents has now started to learn things on his own and starts gaining the worldly knowledge and qualifies himself to become a responsible, ethical and moral human being. The “Upanayanam” is celebrated in a grand manner something equal to that of a marriage inviting almost all the family members and neighbours. The rituals are for two days and the boy is blessed by the elders to lead a conscious life.
Two events are very important in this ritual. In ancient days, the people following the Vedas, especially the Brahmins, led their life only by taking alms from the others and they did not own anything. Their only duty was to chant mantras and perform poojas for the well being of the place where they were living and in turn, it was the responsibility of the people in that place to take care of the Brahmins’ livelihood. So during the Upanayanam festival, relatives and neghbours give bowl full rice to the boy symbolizing this principle that the boy should not be towards the materialistic things and he should refine himself to become suitable for the socially responsible life caring for the well – being of others..
Next is, since the child comes to this world, it is under the care of its parents till seven years of age. The transformation to know more about the world starts at this time and this is the reason why the Upanayanam has to be performed at the age of seven. The father of the child teaches his son the most important mantra of the Hindu philosophy called “Gayathri Manthra” during this ritual and he has to follow this throughout his life. 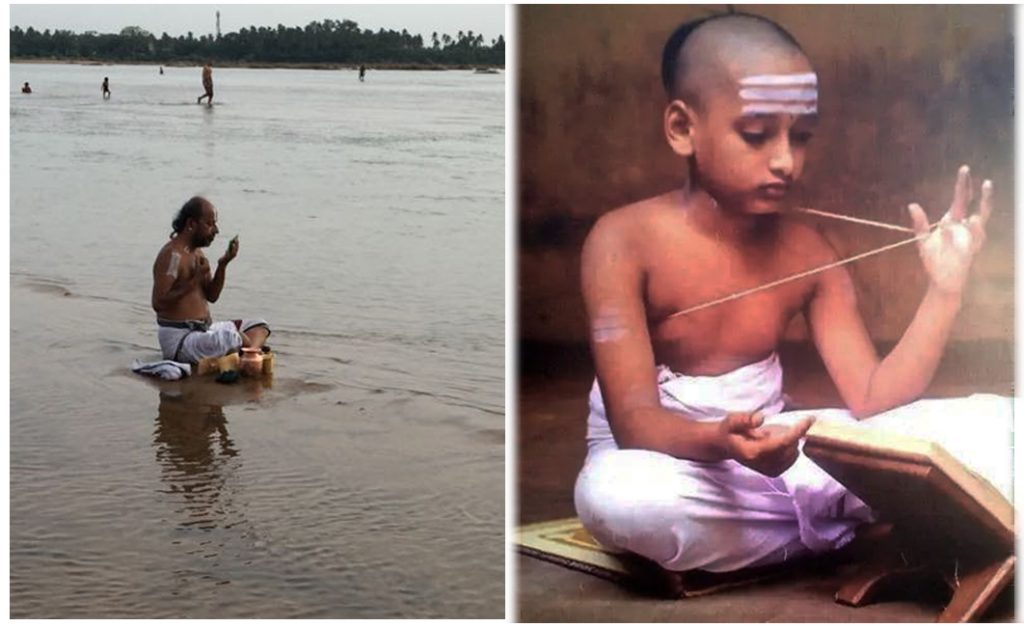 Avani Avittam is a festival when all the male members of the communities following the four vedas will be wearing the new holy thread on their left shoulders, and this festival happens at the banks of the ponds or rivers. As an act of gratitude to Lord Hayagriva and the ancient rishis who gave the Vedas to the world, this festival is celebrated.
On the day of Avani Avittam, people get up very early and take a holy dip. Then they rush to the water bodies where the rituals take place. if you happen to be at this place on this day, you will be surprised to witness the crowd across all ages right from a 7 year old boy to gentle grandpas who have gathered there to take part in this ceremony. With the mantras chanted all around by the priests, everyone wears the new holy thread called “Yagnopaveetham” and lets the old thread into the river.

It is the women who make the day more delicious and colorful. They too get up early in the morning and decorate the Pooja rooms and the houses with different “Kolam”, an ancient artwork with rice flour. They do the dishes like Appam, vadai, Payasam, Boli, and the traditional meals which are very specific for this festival. Once the men come back from the water bodies, a small Pooja offering the food items to the God will be done. After the delicious lunch, the day gets over. 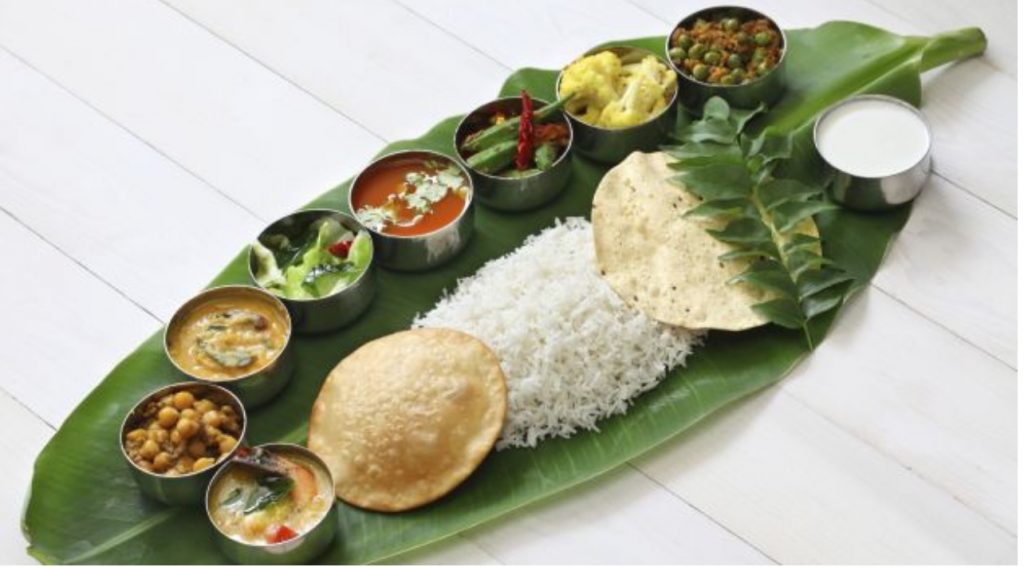 The second day following the Avani Avittam is the most important day and is called as “Gayathri Japam”. Out of all Gods and Goddesses in Hindu mythology, Goddess Gayathri is considered to be more powerful with wisdom. If a person with or without the holy thread chants the Gayathri Manthra daily atleast for 108 times, he is believed to be the luckiest man with the blessings bestowed by the Goddess showering knowledge and wisdom on him. Those who wear the holy thread has to chant the Gayathri Manthra daily and the day next to Avani Avittam is very special. People either go to the water bodies or be at home on this day. They chant the Gayathri Mantra either One Lakh and Eight times or One Thousand and Eight times. After this, they get the blessings from the elders and go to temples for worshipping the God.

An important annual ritual in the life of the people following the four vedas is this Avani Avittam and this is the prayer done together for the well-being of our planet Earth by following the tradition and culture properly and passing the values to the successive generations.