All You Need to Know About VISHU Festival in Kerala 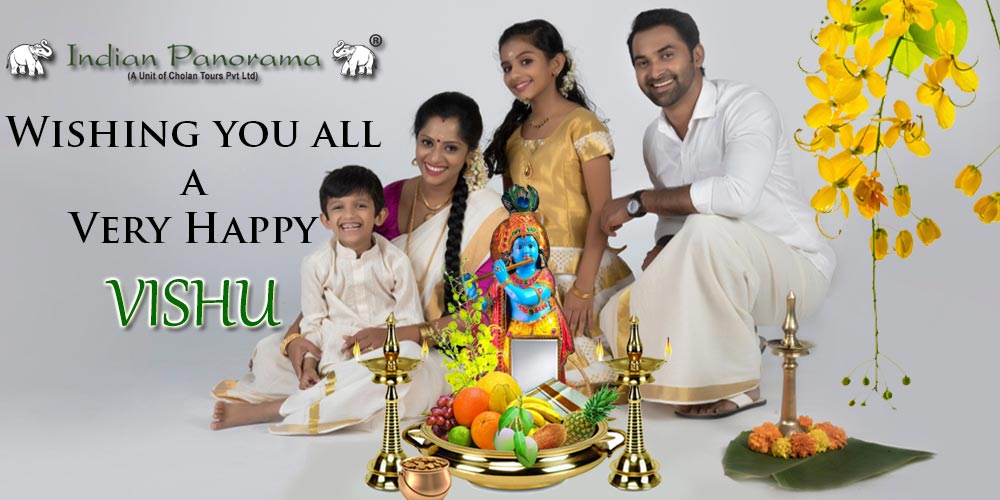 Kerala is all set to welcome yet another festival of love, happiness, prosperity and new hope. Nature flushed with the golden yellow Kanikonna flowers (Golden Shower Tree or Cassia Fistula or Indian Laburnum) has already announced the arrival of Vishu in Kerala. It is the festival that heralds the beginning of Malayalee New Year as well as signifies the festival of harvest in Kerala. It is the time nature blesses the thirsty land with refreshing summer showers and during which the land witnesses the beginning of many agricultural ventures. Hence, Vishu gives new hope in the agricultural prosperity of the land in the year to come. It also reminds us of the fact that it is impossible for humans to exist in this world without nature.

From the auspicious Vishu Kani ritual, Vishu Kaineetam, Vishu Kodi, Vishu Kali, to the authentic Vishu Sadya, Keralites celebrate Vishu with great fervor. Every mall, shops, and streets in Kerala have already worn a festive mode, beautifully decorated with Kanikonna flowers and Vishu greetings to welcome the prosperous Vishu Festival. The celebrations of Vishu Festival is not only limited within the boundary of the state of Kerala, but the joyful and exuberant celebrations of Vishu can be witnessed all across the globe, wherever Malayalees are.

The word ‘Vishu‘ literally means ‘equal‘ in the Sanskrit language. As a festival that brings with it a hope of abundance Vishu has more scientific significance than just religious. That is, it symbolizes equal duration of day and night. It’s that time of the year where the farmers begin the plowing of land and other agricultural activities. It also indicates the entry of sun from Meenam Rashi to Medam Rashi, which is also the time of spring equinox during this span of the year. Keralites celebrate Vishu every year on the first day of the Malayalam month of Medam that usually falls on the month of April. And this year Vishu festival falls on April 15.

Vishu is fully dedicated to Lord Krishna who is an incarnation of Lord Vishnu. The golden shower flower, Kanikonna that marks the Vishu season is so special for the Hindus as it is regarded as the ornament of Lord Krishna that was worn around his waist. And the Kanikonna flower is one of the most essential items of the Vishu Kani.

There is an interesting legend behind the origin of the Kanikonna flower and how it became so special. Long ago, there was a small Sree Krishna Temple in a tiny village in Kerala. The daily poojas of the temple were carried out by a Priest (Poojari). One day, the Priest locked the temple and went home after the evening pooja without realizing that a child was trapped inside the temple. On hearing the loud cry of the child, Lord Krishna appeared before him in the form of a child and gave the golden chain that was worn around his waist for the child to play with in order to stop him crying. The next day, when the priest came and opened the temple, he found that the waist chain of the idol of Sree Krishna was missing. And very soon the news spread around, and a lot of people gathered at the temple and they began searching for the ornament of the Lord. After some time, they found the child playing with the golden chain of the idol. The child was so terrified seeing the crowd approaching him and he suddenly threw away the chain which got stuck on a tree and at once it bloomed with golden yellow flowers. And these beautiful flowers are known as Vishu Kani Konna or Golden Shower Tree. It is also known as Indian laburnum and Cassia Laburnum.

There are also several myths regarding the Vishu Festival. It is believed that it is the day in which Lord Krishna beheaded Narakasura, the demon. As per another myth, the return of Surya Deva is celebrated as Vishu. People also believe that Vishu is celebrated as the Victorious day in which Rama who is the seventh incarnation of Lord Vishnu, killed Ravana, the demon king of Lanka who has ten heads and ten sets of arms. Ravana was so cruel that he never allowed the Sun God, Surya Dev to rise from the East. And it is said that Surya Dev (Sun) started to rise from the East soon after the death of Ravana and that day was recognized as the Vishu day. Hence Vishu is appraised as the celebration of victory.

Viewing the Vishu Kani is the most auspicious ritual of Vishu Festival. Vishu Kani means that “which you see first on the Vishu day”. Keralites strongly believe that their good fortune in the year to come depends on what they see when they first open their eyes on Vishu morning. Vishu Kani is actually the arrangements of several auspicious items like rice grain, Kanikonna flowers, betel leaves, coconut, golden cucumber, jackfruit, tender mangoes, golden lemon, metal mirror which is known as Vaalkannadi, gold, coins, currency notes, oil lamp (Nilavilaku), Holy books of Hindus like Ramayana or Bhagavad-Gita, etc. on a large circular vessel known as ‘Uruli‘ that is made of five metals and are placed in front of the idol of Lord Krishna which is kept inside the Puja room.

The eldest female member of the family, especially grandmother or mother, prepares the Vishu Kani on the night before the Vishu day. And she has to wake up on the auspicious hour of  Brahma Muhurta that is around 4 Am to 6 AM and light the oil lamp kept together with the Vishu Kani to get the glorious sight of Lord Krishna. She will then go and wake up the other members of the family and lead them to the Puja room, one by one, covering their eyes. On reaching the Puja room, she removes her palm for them to get the delightful sight of Lord Krishna along with the Vishu Kani. And there you will feel a divine ambience where the idol of Lord Krishna glows with sparkling light of the lamps and it is one of the most divine sight you will ever experience in your life.

The dawn of Vishu day is known as Vishu Pulari. Seeing Vishu Kani on the Vishu Pulari is regarded as highly auspicious. After viewing the Vishu Kani, they read verses from Ramayana or Bhagwat-Gita which is considered as sacred. Temples like the world famous Padmanabhaswamy Temple, Sabarimala Ayyappa Temple, Guruvayoor Sree Krishna Temple and Kulathupuzha Sree Bala Shasta Temple also arrange Vishu Kani for the devotees to get a glimpse of their beloved deity on the very first day of the New Year.

Being the festival of Kaineetam and colourful fireworks, Vishu undoubtedly occupies a special place in the hearts of the Children. Every member of the family gets a new dress during Vishu, known as Vishu Kodi to begin the new year, wearing new clothes. Keralites often wear traditional wears like mundu for men and Kasavu Saree or Set Mundu for women during Vishu. Even children also wear traditional clothes during the festival. Keralites looks extremely beautiful in their traditional attires. Another interesting part of the Vishu celebration is the Vishu Kaineetam in which the elder people of the family give money to the younger ones as an act of blessing them with wealth and prosperity for the coming year.

The Other Highlight: Vishu Sadya and Vishu Special Dishes:

As Vishu is the festival of victory,  Keralites celebrates it by bursting firecrackers and is known as Vishu Padakkam. It is an integral part of Vishu celebration and everyone, irrespective of age, from young to old enjoys it. The Vishu Festival is incomplete without the grand Vishu Sadya with Sambar, Aviyal, Kalan, Olan, Thoran, Pachadi, Kichadi, Pickle and Pappad. And this typical Kerala Sadya is an inevitable aspect of every Kerala festivals. The dishes like Mampazha Pachadi, Jackfruit Erissery, Pumpkin erissery, etc that are prepared with seasonal vegetables and fruits like mangoes, jackfruits, pumpkins are the highlights of Vishu Sadya. And the Palpayasam served at the end is so delicious as well as very satisfying after the grand feast. The main speciality of Vishu Sadya is that the dishes that are served contains an equal proportion of sweet, salty, sour and bitter flavors.  And it signifies that in the year ahead one must expect all flavors of experiences, be it good or bad.

Besides Vishu Sadya, Vishu Kanji and Vishu Katta are the other Vishu special dishes. The porridge made of rice and coconut milk along with spices is known as Vishu Kanji. And the sweet dish made with rice powder, salt and coconut milk which is served with jaggery is known as Vishu Katta. A dish made of neem that has a bitter taste known as Veppampoorasam is also a prominent dish of Vishu.

As Vishu is to Keralites, this day is celebrated by people in different parts of India by different names. Punjabis celebrates this day as Baisakhi while Assamese celebrates it as Bihu. For Tamilians, it is Tamil Puthandu. The people of Orissa celebrates it as Vishua Sankranti, and it is Gudi Padwa in Maharashtra. The soul and spirit of every festival are the same, though the name varies, and everyone celebrates it with great joy and happiness. But all these festivals bestows the same message to begin a new life with the blessings of the Lord.

Celebrate this upcoming VISHU festival in Kerala with Indian Panorama and experience the other festivals of India with our customized travel packages, to explore India like never before!