A spiritual trek up the holy Brahmarishi Hills 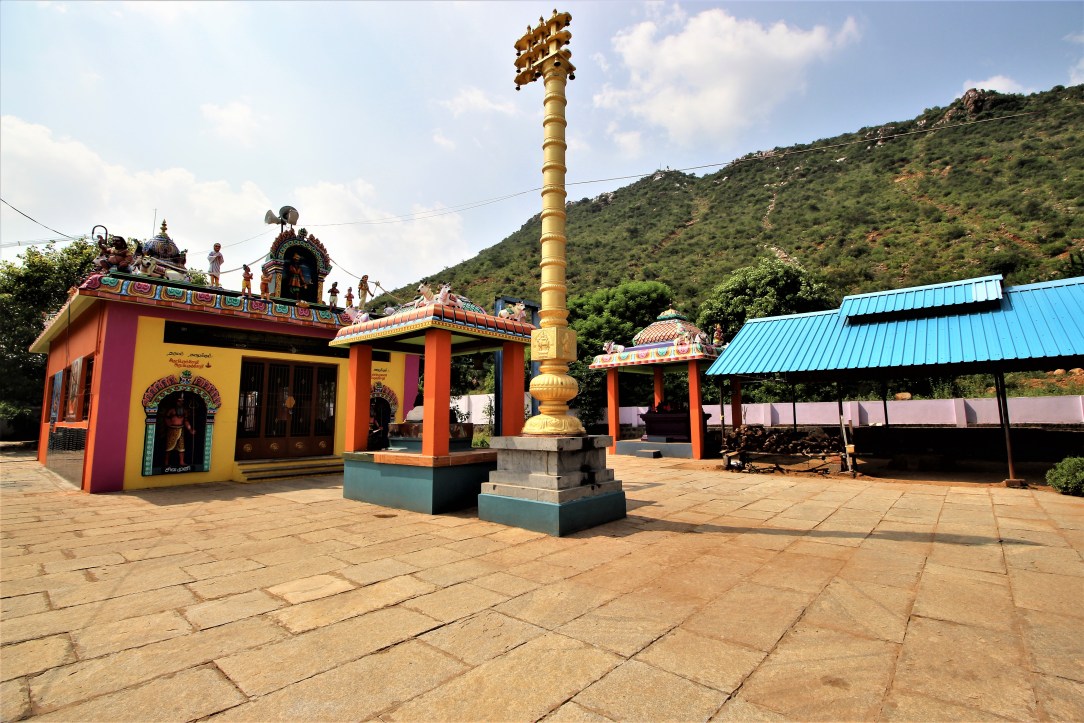 The Brahmarishi Hills is located at the Elambalur Village in the Perumbalur District at Tamilnadu. It is not known to many, however, holds a great spiritual significance. It is said that in the caves of Brahmarishi Hills, 210 Siddhars of Tamilnadu reside in their astral form. Siddhars are highly intelligent beings as per the Tamil tradition. Let it be science, technology, astrology or medicine, the Siddhars use to provide the solution to people since ancient times.

When I heard about the Brahmarishi Hills, I and my friend decided to pay a visit. It would take an hour drive from Trichy to reach the Elambalur village. As we got near Elambalur Village, I could see the hills from a distance. Towering 750 feet over the landscape it poses its might. We met a holy man few 100 meters near the hills. We asked him where to start the trek. He pointed his finger towards a small Shiva temple by the foothills of the Brahmarishi Hills. He asked us to visit the temple and then start the climb.

We offered our prayers and started the trek. It is hot here throughout the year, nearly 38 degrees and unlike the usual cool weather we are used to trek, this is pretty much challenging. The rocky terrain makes it even tougher. However, we were already prepared for it. There is a walkway cut out for the devotees to easily make it up to the top. Within a few steps of climbing, we started feeling the boiling heat but yet something fuelled us to continue. After nearly an hour of climbing, we finally reached the top and we had a panoramic view of the surrounding landscape which was pretty rewarding. We were gasping heavily for air, but somehow we could catch up and slowly felt relaxed and calm. We were the only guys up the hills.

We roamed around the top of the hill and enjoyed the beautiful views it has to offer. There is a small stone structure made at the one end of the hill where the temple priests light a lamp every evening. We could experience a divine energy field at the very spot. The ambiance is really peaceful and people use to meditate here. After spending some time here we started getting down the hill. On the way we saw a temple guy feeding bananas to the monkeys of the hill. It is a customary practice and guy does it every day. When he whistles all the monkeys rush towards him from every part of the hill. 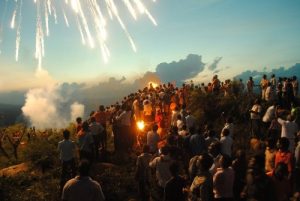 Just as we reached downhill, we could hear the sound of the conch and the temple bell. Afternoon Pooja was ongoing. We entered the temple and the priest was singing hymns praising Shiva. His voice was so touching, full of devotion and spiritual vibration. He has his hair long, his beard till his chest. After the Pooja, we spoke to him and asked us to walk with him. He narrated many stories of the Siddhars who resided and meditated at the Brahmarishi Hills. His smile was captivating and his words full of wisdom. The temple also feeds many homeless people every day. We were offered lunch as well. He accompanied us to a hall. Many people were having lunch. We had our lunch and thanked the priest for his kind hospitality. He asked us to visit the hills during Mahashivaratri [February/March] when tens of thousands of people gather around the temple and climb up the hill to offer their prayers to Lord Shiva. People from various other countries namely Singapore, Malaysia and the United States also visit the temple during this grand occasion.

We would definitely visit the temple during the Mahashivaratri and bring you the coverage.

For more information about the temple and how to reach, log in to Indian panorama

3 responses to “A spiritual trek up the holy Brahmarishi Hills”