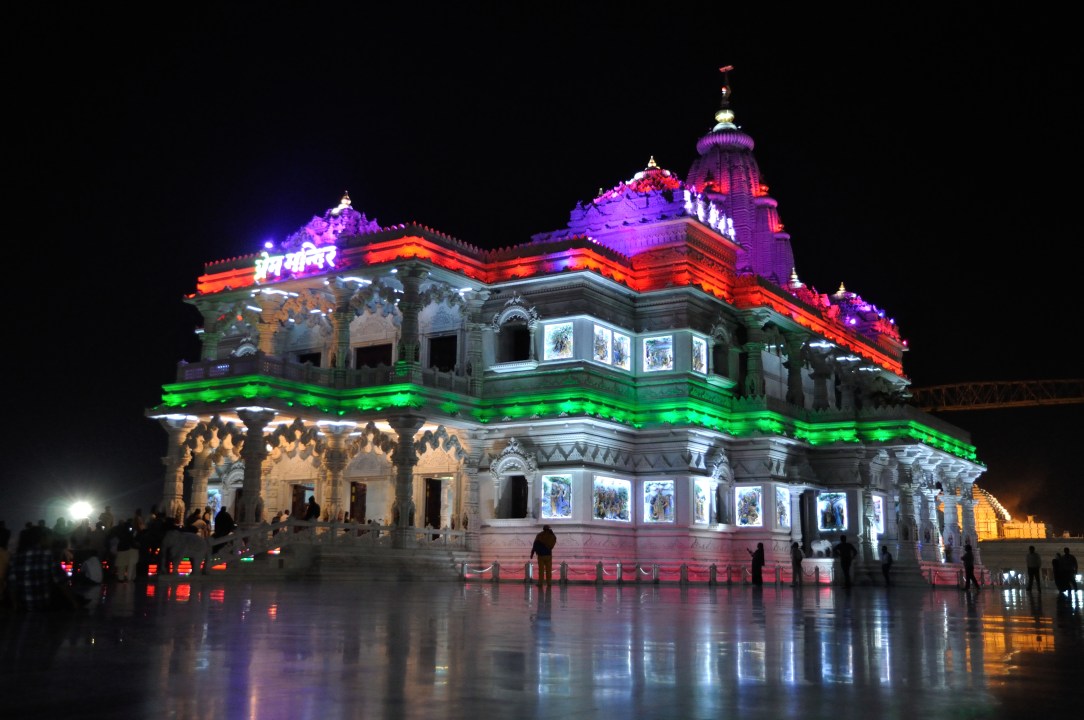 Mathura is popularly known as the “Braj Bhoomi”, the land of eternal love. How could it not be when the divine lover Lord Krishna was born here? Krishna is the other name for love. Mathura is one among the Sapta Puri, the 7 holy Hindu cities in India. It is one of the ancient cities in India which is mentioned in the Indian epics the Ramayana and the Mahabharatha. Mathura host many temples dedicated to Lord Krishna in his various avatars which draws millions of pilgrims every year especially during the Janmashtami, the birthday of Krishna. There was double the number of temples at Mathura a thousand years ago than what remains now.

For the foodies, Mathura has the famous milk sweets, Mathura Peeda and Mathura Burfi. There are a lot of sweet shops and food joints on the streets of the city where you can try all the delicacies this holy land has to offer and also take some Mathura special back home.

Let me pick you seven must visit attractions at Mathura-

Regarded as the birthplace of the Lord Krishna, the 8th incarnation of Lord Vishnu, the Krishna Janma Bhoomi Mandir is the most visited pilgrim center in Mathura. Historians say that the prison cell known as the Garbha Griha in the temple premises is the exact place where Sree Krishna was born to Devaki and Vasudev. The same prison is now a beautiful temple where every year the Janmashtami Festival is celebrated and millions flock to the temple to offer their prayers to Krishna. This is the reason the Krishna Janma Bhoomi Mandir is considered as the most auspicious and divine Krishna Temple.

Dwarkadhish Temple is a magnificent temple built around 200 years ago by a sworn devotee of Lord Krishna, Mr. Seth Gokul Das Parikh. It is located within the ancient city of Mathura. The Lord Krishna Idol is installed here as the “King of Dwarka”. There are no peacock feathers or his flute depicted on the Idol. The interior of this temple is quite famous for the exquisite carvings and folksy paintings it holds. The Hindola Swing Festival during the month of Shravan [Monsoon] is celebrated in a grand style when tens of thousands of devotees gather around the temple for a darshan of their beloved Lord Krishna. At present, the temple is governed by the Vallabhacharya followers.

Govardhan Hill is an 8 km long hill located in Mathura district of Uttar Pradesh. It is the same hill Lord Krishna lifted to rescue the cattle and the people living near the hill from the rage of Lord Indra [Lord of Thunder and Lightning]. It is a sacred hill as per the Vaishnava tradition. It is believed that the hill was 3000m high about 5000 years ago during the time of Krishna but due to the curse of Pulastya Muni, it is shrinking day by day and is just 25m in height at present.

Vrindavan is a town in Uttar Pradesh which is as per Hinduism the place where Lord Krishna spent his childhood days. It is equally important as Mathura town for the Vaishnavites. It is located on the banks of Yamuna River 12 km from Mathura. The town houses hundreds of temples of which the prominent ones are the Madan Mohan Temple, Govinda Dev Temple, Sri Ranganathan Temple, Banke Bihari Temple and much more. Vrindavan is also known as the “City of widows”, as there are more than 20,000 widows from different parts of the country residing here in and around the town. They spend their time seeking arms and singing Bhajans of Lord Krishna at different Bhajanashrams within Vrindavan.

It is yet another holy town considered sacred by the Vaishnavites. It is believed that once Lord Krishna slain a demon disguised as a bull. Radha, his lover asked him to visit various holy rivers and take a dip to wash off his sins or his bad Karma of killing a living being. Krishna who is God himself laughed at Radha and hit the ground hard with his foot where a kunda [a small pond like water body] formed. He took a dip in it so as to please Radha. Radha annoyed by Krishna who used his powers to form a kunda, made a kinda herself with the help of her girl attendants and filled the kunda with the water of “Manasi-Ganga”, a holy kunda near Govardhan. This kunda is known as the Radha Kund now, where millions visit every year to take a dip.

Mathura Museum is a Government run museum which holds a lot of archaeological findings belonging to different periods some of which are as old as 600 BC. It was founded in 1874 by F.S Growse. The vast collection of this museum includes stone sculptures, basreliefs, terracottas, clay seals, inscribed bricks, pottery pieces, bronze objects and paintings from the Mathura region. Another significant collection of the museum is the ancient sculptures of the Mathura school dating from 3rd century BC to 12th century AD which was famous during the Kushan and Gupta Empire. There were postage stamps issued by the Government of India during the 100th anniversary of the Museum in 1974.

Another great temple built by a dedicated devotee of Lord Krishna, the Bankey Bihari Temple houses the idol of Lord Krishna in his Supreme Enjoyer Roopam . Swami Haridas who built the temple was the guru of the famous musician Tansen, one among the nine gems of the Mughal Emperor Akbar. It is believed that one-day Swami Haridas sang the following verses “Mai ri Sahaj jori Pragati Bhai just rang ki gaur syam ghan damini jaisen. Pratham hun ahuti abhun aagen hun rahihai na tarihai taisain, Ang ang ki ujraii sugharaii chaturaii sunderta aisain Shri Haridas ke Swami syama kunjbihari sam vais vaisain”. As soon as he completed the song, the celestial couples themselves, Lord Krishna and Radha Devi appeared before him and his disciples and merged into a one black piece of stone idol. This idol is worshipped here as the Bankey Bihari.

The Hindola Festival during the Shravan month is the most auspicious occasion here when hundreds of thousands of devotees from all parts of the country and abroad visit the temple to be a part of this great swing festival.

Mathura is extremely hot during the Summer Season. The average temperature is about 48 degrees and it is really harsh for the visitors to enjoy Mathura. The Winter Season [December – January] is probably the best time to explore the best of Mathura. It is really chilly at times though, as the temperature may get down to 2c -3c, but with some woolen cloths to cover you up and some hot tea available at the local stalls you will enjoy Mathura to the core. The Hindola Festival during the starting of the Monsoon Season is also a good time for the devotees to visit Mathura and be a part of the famous swing festival of Mathura.

The nearest International Airport is at Delhi 145 km away and the nearest domestic airport is at Agra some 55 km away. After getting down at the Delhi Airport or the Agra Airport as per your plan, grab a taxi to reach Mathura City or use public transport service which is always available from Delhi or Agra.

Nearly 1 km from the Mathura City is the Mathura Junction Railway Station which is the on the Delhi- Agra line. You can easily catch trains which pass through Mathura from any part of the country. Do remember to book your tickets as early as possible during the festive seasons like the Janmashtami or the Hindola Festival when lots of devotees travel to Mathura.

Mathura is well connected by the National Highways and State Highways. There are two bus stands in Mathura, the Old Bus Stand which is just 2 km away from the city and the New Bus Stand which is within the city itself. Bus services from and to the major cities like Delhi, Jaipur, Gwalior and many other cities are available.