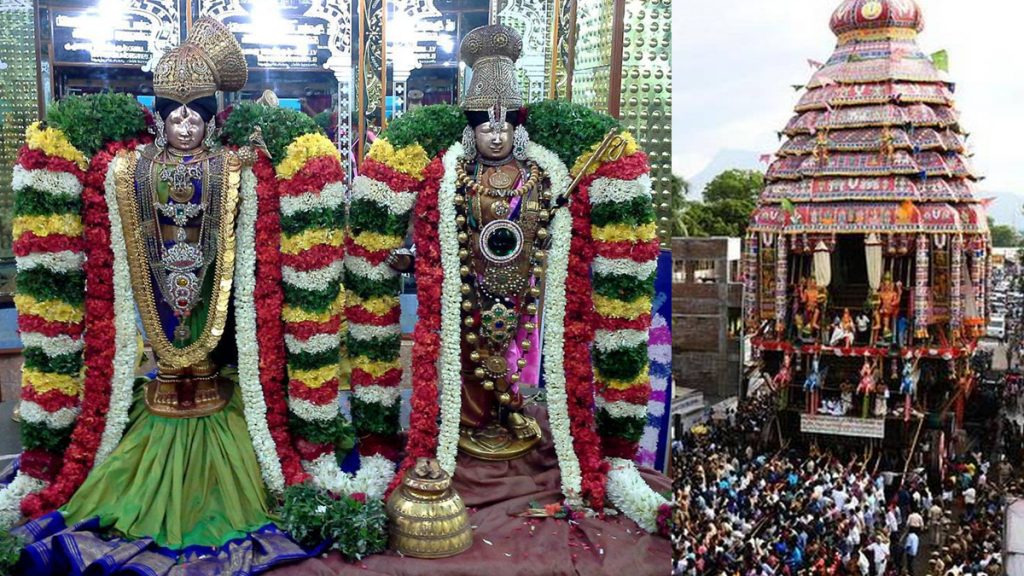 Spirituality and Nature always complement each other and can be vividly experienced in many tourist destinations across India. The same is the case with Srivilliputhur, a small town in the down south of Tamil Nadu, which is popular among the devotees and tourists.

Srivilliputhur, popularly known as one of the most revered Divyadesams, for the magnificent temple “Srivilliputtur Arulmigu Nachiyar (Andal) Sametha Rangamannar Temple” housing Lord Rengamannar and his consort Sri Andal, which is located 80 km from Madurai. Besides being a spiritual destination, Srivilliputhur is equally popular for the most beautiful location Senbagathoppu, blanketed by lush green dense forest and snow-white waterfalls.

As per the legends followed by Vaishnavites, Periyazhwar, the most superior saint, while collecting the flowers from his garden, found a beautiful female child and he realized she was the incarnation of Goddess Lakshmi and took her with him. The little girl grew up in Periyazhwar’s house with the name of Andal or Kothai. Right from her early childhood, she developed an uncompromised devotion towards Lord Vishnu and it was evident in her every action. When she grew up as a young girl, the love and affection she had for him increased manifold and she wanted to marry him and she was not for any earthly marriages, every woman would prefer in general. Andal penned beautiful songs in Tamil praising Lord Vishnu and are popularly sung as Tiruppavai and Tiruvembavai in almost all Vishnu temples during the Tamil month Margazhi. Her dreams came true and one fine day, she got married to Lord Vishnu and both of them are housed in the temple, which has become the all-time glory of Srivilliputhur.

This huge temple is on two floors and on the ground floor, there is a separate shrine for Sri Andal blessing her devotees with a beautiful parrot in her hands. The first floor is the shrine of Lord Rengamannar and Sri Andal. It is surprising to find the Garden and the Tulsi plant under which Sri Andal was found out is still maintained with utmost sanctity.

The day exactly when Andal was found in the garden was in the Tamil month of Aadi and the star Pooram, which is celebrated as her birthday since 7th century. The temple chariot which is unimaginable huge is taken on a procession with the idols of the couple, blessing the people on the way and the Adi Pooram festival draws lakhs of devotees from all the nearby villages.

The Aadi Pooram car festival is one of the important festivals at this temple, as it celebrates the birth star of the temple main deity Sri Andal.

Srivilliputhur is renowned not only for the Andal temple but also for a few more things. One is Senbagathoppu, the bird sanctuary, located at a distance of 18kms from Srivilliputhur. There is a small temple atop the hill and to reach you need to cross six kilometers into the forest. You can spot a number of beautiful birds on the way and the temple is dedicated to Lord Kattalagar, meaning, a beautiful man inside the forest. Lord Sundararaja Perumal, another form of Lord Vishnu is worshipped in this temple and you have to climb 247 steps, representing the 247 letters in the Tamil Language, to reach the main entrance of the temple. One more highlighting feature is the Noopura Gangai, a falls in this region which never goes dry and is with the same water current all along. Senbagathoppu is an ideal spot for a picnic.

Second is the peculiar hairstyle of Saint Andal, called Andal Kondai and the parrot she holds in her hands. Andal Kondai is unique and it is almost followed as a custom in all houses of Sri Vaishnavites to decorate the bride with this antique hairstyle and the belief behind this is, every bride is revered as Andal on the day of her marriage and she is blessed to lead a happy married life as Andal does. The parrot possessed by Andal is made afresh daily and the task is carried out the members of the same family for generations across. With staunch devotion and fasting procedures, the member of the family makes this parrot with the required materials and is he not blessed to see his artwork decorating the divine hands of Andal every day?

Yet another interesting thing about Srivilliputhur is Palkova, which you should never afford to miss while visiting Srivilliputhur. The sweet, unique to this place, is made with milk and sugar and the recipe in some of the traditional shops in and around Srivilliputhur is never altered to ensure the same taste every time.

Did You Know? The temple tower of Srivilliputhur adorns the emblem of the Tamilnadu Government.

The tower of this temple rises up to 192 feet high and is the official symbol/emblem of the Government of Tamil Nadu. It is said to have been built by Periyalvar, the father-in-law of the Temple Deity, with a purse of gold that he won in debates held in the palace of Pandya King Vallabhadeva. Srivilliputhur in Tamilnadu is well known for its ancient heritage and its devotional contributions.

On this auspicious Adi Pooram day and let us all remember her staunch devotion and conviction to achieve what she desired for.

Visit Srivilliputhur, explore the centuries-old history and tradition, that connecting the threads of India’s heritage to make it incredible!