Kerala – Still the “God’s own country” 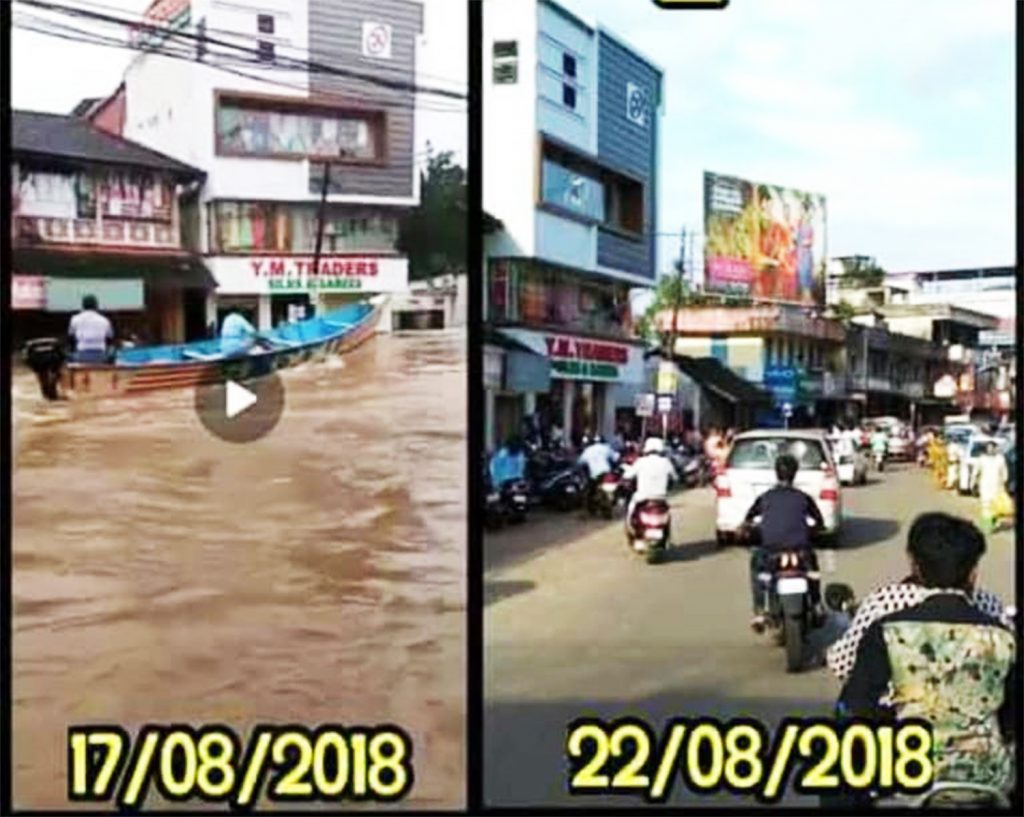 The recent rainfall and the floods in Kerala has left the state devastated. The monsoon promptly arrived in Kerala and brought rainfall to the extent beyond the imagination of any individual. The entire state was quarantined for nearly a fortnight due to the heavy rainfall, followed by the landslides and huge outflow of water from almost all the water reservoirs. Asia’s largest dam Idukki reached its full gateways and after a long period of 26 years, all the water gateways of the dam was let open to balance the situation.

With intriguing pain and less courage after listening to the news widespread in the print and electronic media, we, few friends decided to see the plight in Kerala. Of course, we started in a very sober mood, making up our minds to witness the places in standstill which were once the divine abodes for many or all of us. To our surprise, we found that Kerala is full of positive vibes all around. People here never give up and they did not now, even in these catastrophic moments.

Though more than two hundred thousand people have been evacuated from their respective areas due to the wrath of nature, we found them grounded, in peace and feeling positive about whatever happened to them. Nature teaches us many lessons in its own way. One such valuable lesson is Humanity. Irrespective of one’s religion, caste or any kind of social division, people from all over the country are lending their hands of relief to the affected. A victim for the flood who was a Hindu was buried inside a church premises, we saw the rich sharing their bread with the poor and on the holy Bakrid day Muslims were praying inside a Hindu temple. It is yet another moment  for all of us to remember why India is incredible! We could see people dancing and singing in the relief camps, a sign of confidence we could never see anywhere. No matter what, Kerala is not going down, rather the whole state is coming back with lot more energy and faith.

Kerala has been one of the favorite holiday destinations for travelers all across the globe, let it be a honeymoon, an adventure tour, a family getaway, a stress buster holiday, Kerala has always gifted the best moments of their life. We are sure it will continue to be on the bucket list of the travel community every year. Within a month, Kerala will be back to action and all those eagerly waiting tourists can again fly for their dream holiday in Kerala.

Kerala has already set many milestones for the others in many aspects. Let it be humanity, gender equality, employee welfare, the list goes on. This time Kerala has taught the world the most valuable lesson of togetherness. They showed how to stand united even in the minutes of a national disaster. They showed the World “Togetherness is Happiness”. Moreover, Kerala insists us to imagine what if the whole World unites, and peace prevails in every part of planet.

Kerala is, and will always be the God’s Own Country!