This bizarre festival in Kerala is not for the faint hearted 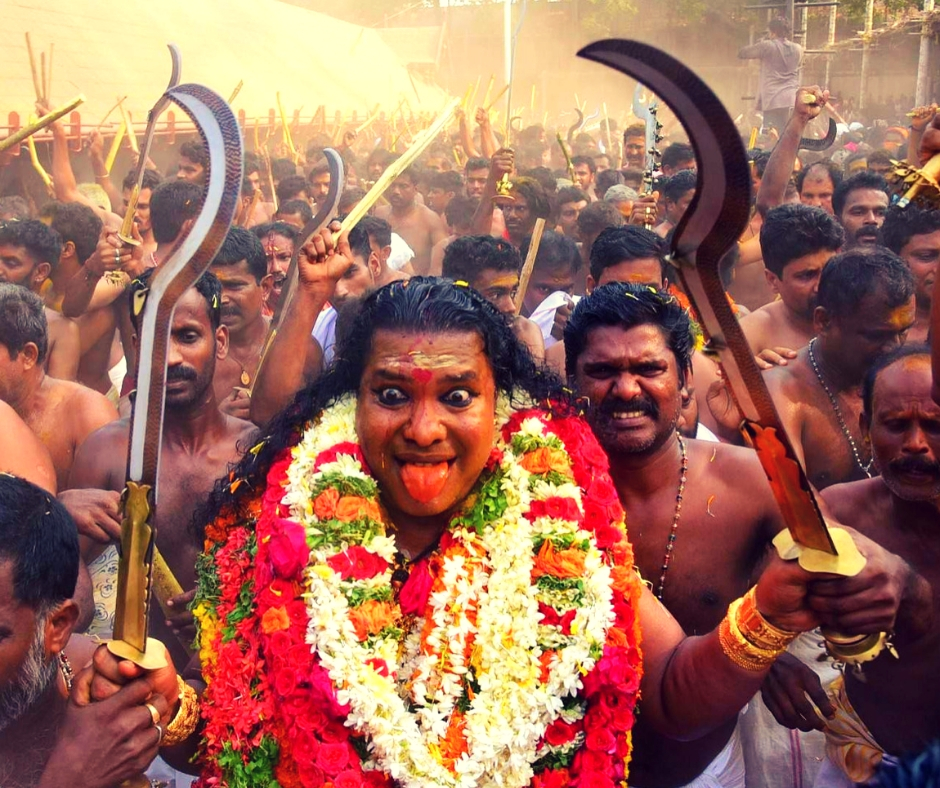 India we know is a land blessed with pure natural beauty. The mountains, serene sea sides, brilliant architectures, India has everything a traveller looks for an exotic holiday. However, India is not all about beautiful landscapes and mouth drooling cuisine. It is a mysterious land which could at times bewilder you with its terrifying rituals and bizarre festivals. This particular festival in Kerala is something beyond your concept of a colourful Indian festival. I am talking about the famous Bharani Festival celebrated annually at the Kodungalloor Bhagavathy Temple in Kodungalloor. Kodungallor or previously known as Cranganore was the ancient capital of Kerala. The Bharani Festival is one of the most anticipated events in Kerala when millions of devotees and curious travellers from within Kerala and neighbouring states flock to the Kodungalloor Bhagavathy Temple. 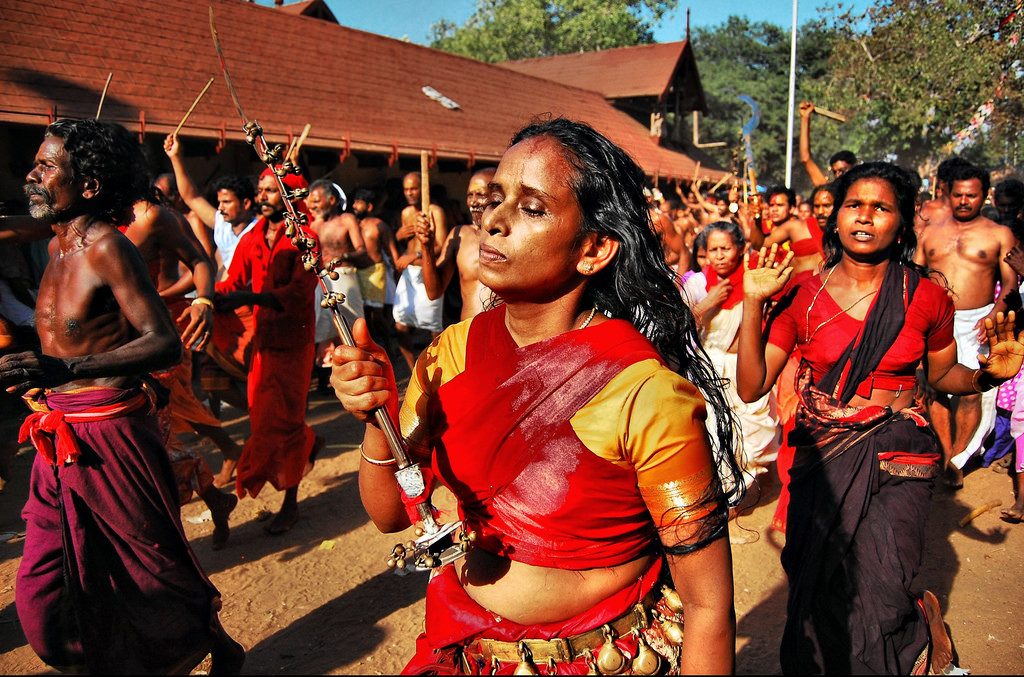 The energy here is intense!

During ancient times, when the caste system was so common everywhere in India, the lower caste people were not allowed inside the Kodungalloor Bhagavathy temple. The Bharani festival unleashes the fury of these low caste people when all of them dance around the temple marking their presence to their beloved Goddess Kodungalloor Bhagavathy. The festival starts when one among the royal family unfolds the Pattukkuda, a red Umbrella used for declaring the commencement of the Bharani Festival. It also is a sign of granting permission to the lower caste people to enter the temple. 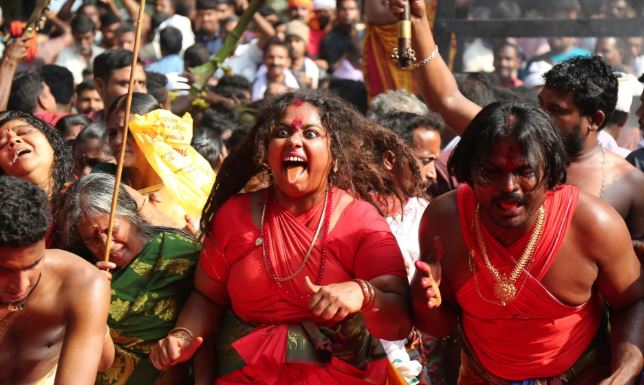 A lady lost in trance

The most fascinating, in fact, shocking fact is the way it is celebrated. The offerings or Prasad [in Malayalam] is thrown at the idol unlike in any other temple. Blood and Bharani Pattu [Esoteric songs] are the favourites of Goddess Bhadrakali here. During the 7 day Bharani festival people dress all in red. The Velichappads or the prophets of the temple are the real show stoppers. With blood-covered faces, bright red attire with bells attached to it and curled swords they dance and sing the Bharani Pattu. The Bharani Pattu is mainly esoteric songs which are believed to calm the Goddess and stop her from destroying the world. While moving the Velichappads hit their heads with the sword and bleed as a form of offering to the Goddess Bhadrakali. They dance rigorously for hours around the temple in a trance-like state. Sacrificing Roosters is also a common sight during the Bharani Festival. The whole temple premise would appear as an ocean of red, a sight which is not pleasing to everyone. 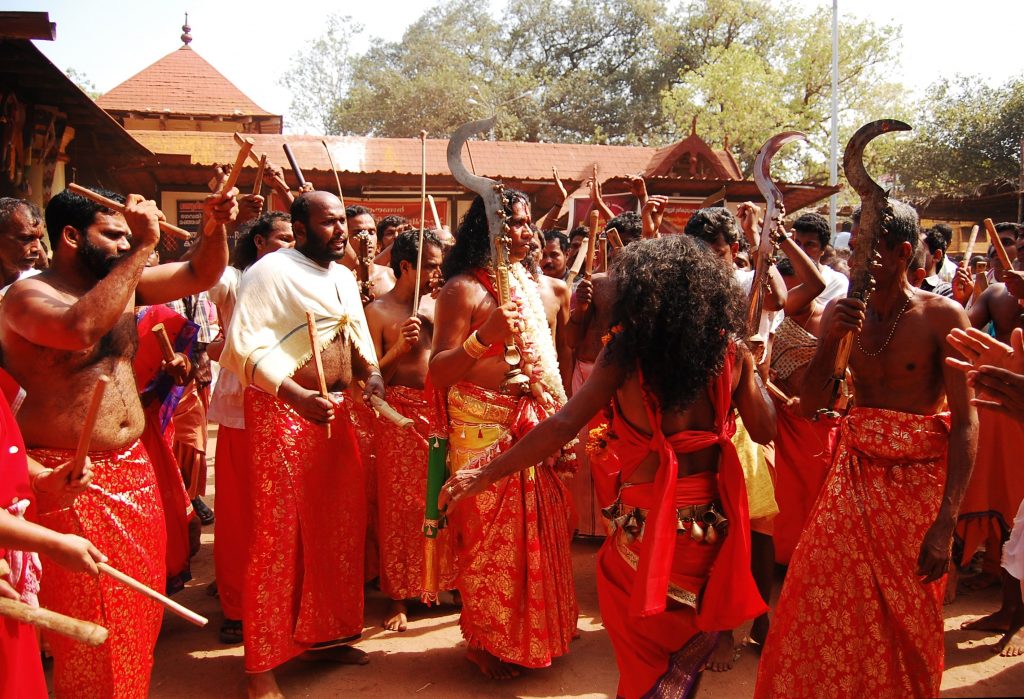 I am not killing the surprise by jotting down all the “Out of the World” sights you could see here. It is recommended to visit the temple during the Bharani Festival and witness with your own naked eyes. It is guaranteed you will be awestruck with the raw energy the Bharani Festival offers. It is something you would see nowhere else in the World.

Reasons are many to justify the fact that India is incredible. We will come up with more fascinating festivals for you to plan your Indian holiday and spice it up with its most unseen sights.

When to plan your visit?

The Kodungalloor Bharani Festival is celebrated during the Malayalam month of Meenam (March-April). Plan your tour with Indian Panorama and one of our expert tour consultants will assist you with a detailed program for you to take part and witness this truly unbelievable spectacle.