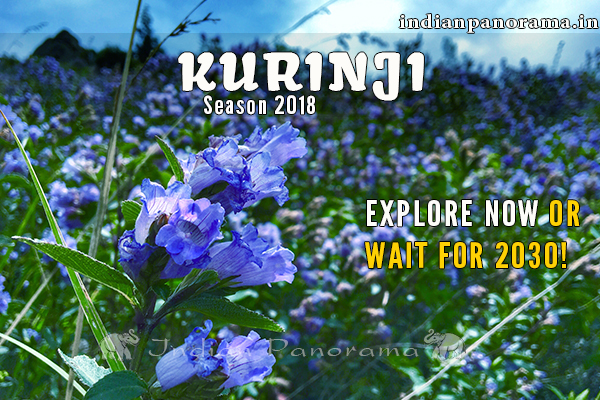 After knowing that the magic of Kurinji flowers has begun in the Western Ghats Ranges, I packed my things to head off to Nilgiris which owe its name to Kurinji flower, as it is called as the Blue Mountain. I was very eager to capture the golden moments of the mountains covered with the blue blankets. Nilgiris did not disappoint me, the moment I saw the landscape in front of me, I was really taken aback at the sight of the Kurinji flowers blossomed everywhere. A rare and unique scenery, giving you a life time experience. Actually I planned for a two-days’ trip with an idea of covering all the possible areas abundant with Kurinji flowers. I dumped my backpack with things required for short or a long trek and I was so determined to witness the buds transforming into flowers and bees sucking the most tastiest honey from the Kurinji flowers. I was much concerned that if I miss the awe struck experience this time, then I will have to wait for another unpredictably long twelve years.

So I made all set for my journey to witness the Kurinji flowers and I had a mix of feelings when I was approaching near the area. Whatever I have read about Kurinji were pondering in my mind that, Originally known as Kurinji, the name “Neelakurinji” has been popularised and imprinted on everyone and people always mention it as the “Neelakurinji”.

Its scientific name is Strobilanthes kunthiana. 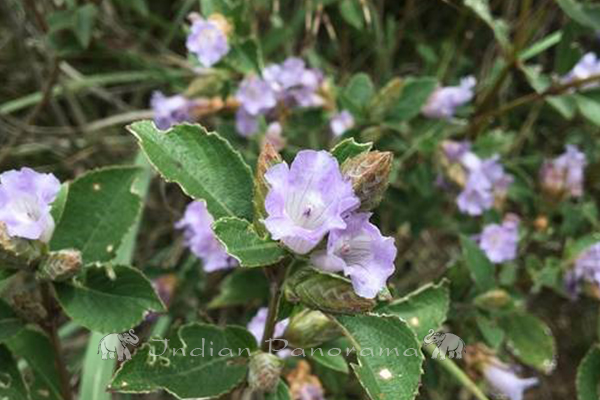 This is a mystical flower which blooms just once in 12 years in the thick Sholas of the Western Ghats. Due to the exceptionally long flowering cycle it attracts those curios travellers who travel hundreds of miles to see it with their naked eyes. The Kurinji flowers when blossom forms a velvety carpet on the fabled hills of the Western Ghats offering a mesmerizing sight for the onlookers.Found mainly in Kodaikanal, Nilgiris district and Munnar, it is also spotted in Yercaud and Yelagiri as per the latest reports. I also got information that the Kurinji flowers bloomed in the Lamb’s Rock in Conoor and the hills of Denad Village, 18 kms from Kotagiri. I planned to visit there and personally do a short trek which I trust I can finish up in 3 hours time total, up and down.

Mentioned in the ancient Tamil Sangam Literature, this legendary flower holds huge historical significance as well. In it, the very term Kurinji is referred to Mountainous areas.

Kurunthogai, a classic poetic masterpiece describes the Kurinji flower as the symbol of love and happiness. Until recent times, the tribals of the Western Ghats used to calculate their age with respect to the blossoming of this legendary flowers.

The Kurinji Hike at Denad Village, my personal experience

Early in the  morning I started from Coimbatore to Kotagiri first, 35 kms from Ooty. [Both comes within the Nilgiris District]

From Kotagiri, a 15 km drive took me to the Denad Village. I got information that Denad is the place where the Neelakurinji bloomed over a vast piece of land comparing to other parts of the Nilgiris district. The road to Denad is decent and I even came across Kurinji flowers on the way by the side of road. Though not in numbers we can see it up close on the way itself.

On reaching Denad, my eyes fell upon a hill which seemed to be my spot. Even from a half km distance I could see the hill shaded in purple. 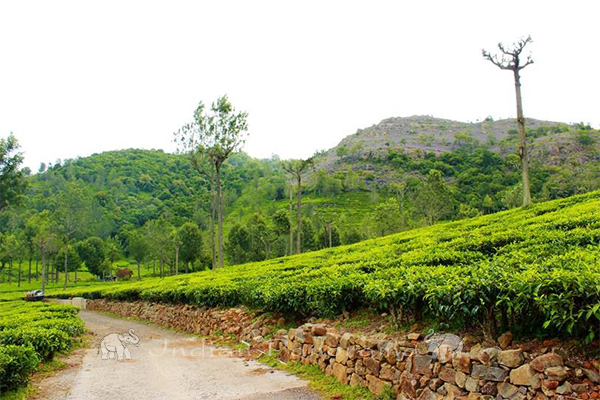 I reached downhill and met a Tea Estate officer nearby whom I stumbled upon while I was trying to figure out how to reach there. He showed me a small pathway amidst thick woods and told me it would take a half an hour hike up the hill.I started hiking and on the way I noticed a small boy following me, a local. I asked him the best way to reach uphill. He told he will come with me and I said yes [Definitely YES]. The pathway starts with lush tea plantations and then through dense woods and grasslands. 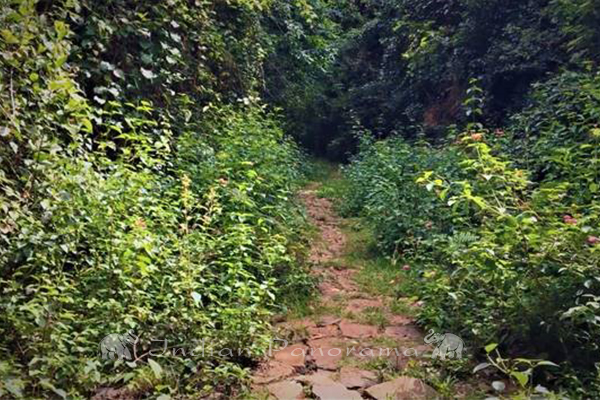 At some area the way is bit bushy and you have to make your way through it.

Not a big deal for sure, especially for those who are desperate to get close to the carpet of these gorgeous Neelakurinji flowers. It is worth it rather than just having a distant glimpse and go back.

After a 15 minutes hike, I came across small beds of Kurinji flowers here and there.

I saw this beauty and she demanded a shot-    This is a fully bloomed Neelakurinji nearing its end. 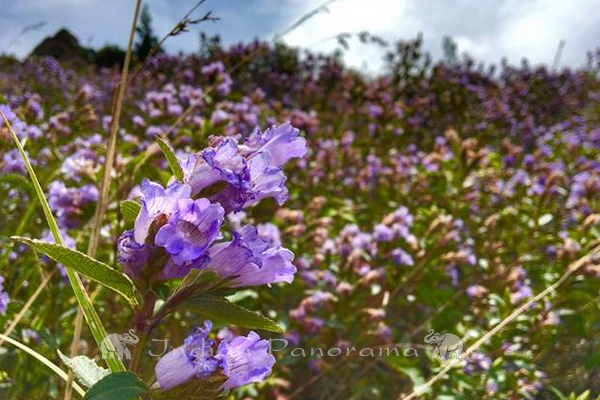 Again after a bit tiring but exciting hike through the grasslands, I reached here- 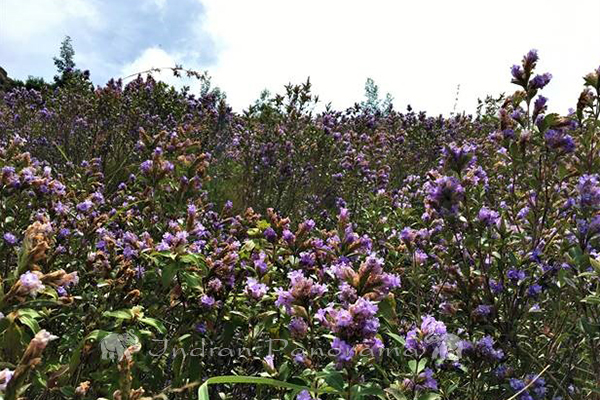 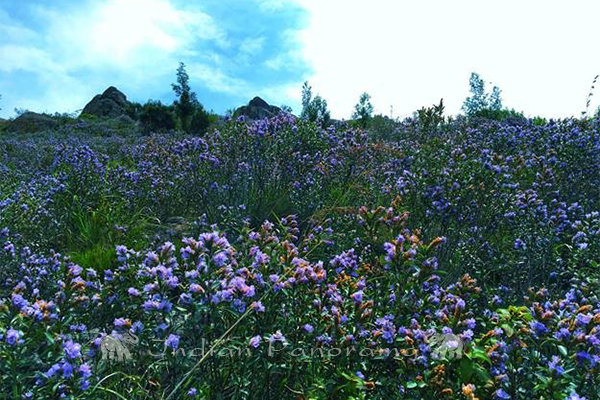 The flowers have bloomed over a vast area here at Denad and one can have a perfect Neelakurinji carpet view.

This place is very much recommended, but how long it will be here is unpredictable.

We moved around a bit and after clicking few snaps decided to return back. If you are ready for a long trek you can cross this hill and even move to other hills in the same belt with the Kurinjis bloomed all over. The thing is we may need a whole day for it and that would be suitable for the hard core trekkers.

After spending an hour or two amidst the Kurinjis, we got down and I moved to Conoor to find what’s happening there. More of it later.

Image below- Bees sucking Honey out of a Kurinji flower. Neelakurinji honey is one of the rarest and sweetest of its kind in the whole World.

Also as you know, this honey we get only once in 12 years 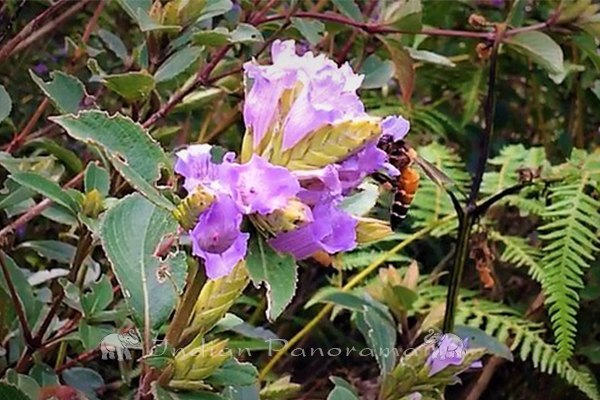 What else you need in this world of uncertainty, you get to see the blossoming of a beautiful flower and it is for sure an experience once in 12 years. I did not wait after knowing about Kurinji. What about you ?

One response to “Neelakurinji-2018”